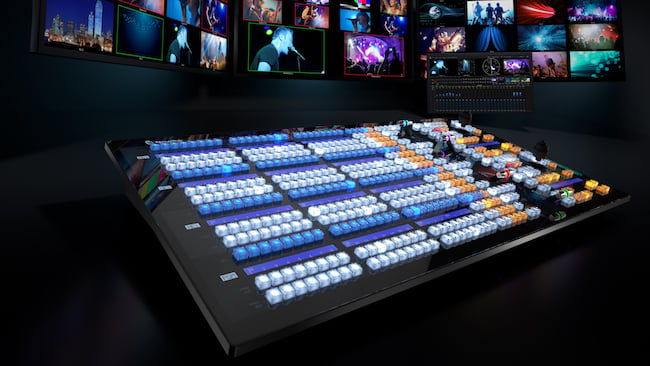 David Shapton reckons that NewTek’s software-driven, infinitely expandable approach to switching, input, and output of video sources over IP (and SDI) represents an Uber-level game changer for the industry.

NewTek’s IP series has simply fallen out of the future. In our opinion, it’s five years ahead of anything else. And, in this age of exponential change, that means that it seems decades ahead.

There’s no other way to put it: production quality video over IP is revolutionary. Sending video over network cables using IP has been around for a while but without a practical way to use it in live production it’s been perceived, perhaps, as experimental and needing the skills of an IT department to make it work.

Neither of these perceptions are now true. While various companies are involved in the dance to achieve a working standard for IP production video, NewTek has forged ahead and built a complete, working — and available in the here and now — ecosystem.

Is it standards-based? No. That would mean waiting another five years. Is it Open? Yes. It’s a published system that anyone can work with. The scope of it is remarkable and so is the IP Series, the latest NewTek system using it. 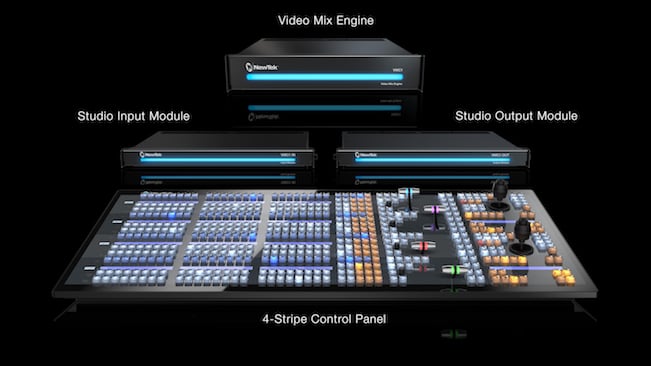 The IP Series has four distinct units, all separate, all modular, and interconnected with Ethernet. At the core is the  NewTek VMCQ Video Mix Engine, which in itself is a powerful unit with 44 live inputs and able to handle 64 source channels - and all the capabilities you’d expect from a fully-configured studio switcher. If you need even more facilities, just plug another Mix Engine into the same network and the two will work together. Or three of them. Or five of them.

We haven’t seen it yet but you can probably assume that the Mix Engine will include at the very least the same abilities as a top-level TriCaster. What we do know is that the following is included: full mixing control with 8 M/Es with full re-entry, plus PREVIZ. There’s a scalable effects system with virtually unlimited matting, DVE, transitions, overlays, virtual sets, real-time data — and that’s by no means a comprehensive list.

Alongside that you have the impressive-looking NewTek VMC1 4S control surface can be hooked up to either single or multiple Mix Engines and can take command of the whole production. The NewTek VMC1 IN input module, meanwhile, has 4 SDI or IP inputs per unit and is automatically recognised by the Mix Engine. Each input module includes a multiviewer with return video feed and the ability to record ISO feeds to network storage. And the VMC1 OUT output module can output four channels.

The system is modular in the deepest sense in that anything connected to the network — that’s IP series modules, or other NDI sources and destinations — exists in the same interconnected “fabric”. Everything is, literally, connected to anything else, though the virtual routing provided by the network.

There’s an important thing to bear in mind here. Networks are intrinsically scalable. They can be expanded to almost any degree. The ultimate set-up would be to have a fibre infrastructure running a virtual LAN that would be almost infinitely configurable and have a vast amount of available bandwidth.

This is the ultimate architecture for the NewTek IP Series. It’s important to understand that the fact that the new products can run over generic IP networks does not mean there is a limit on higher functioning configurations. With this system you could build an entire, multi-studio live production facility with fibre at its core, and almost never have to pay for re-wiring again: not project to project, nor year to year. And the massive advantage is that every source, every destination, and every processing unit, is available anywhere, at any time.

How did NewTek do it? How did it manage to be five years ahead of all the other companies? It’s all a question of what you’re used to. NewTek’s entire history has been centred on live digital video. Video on computers and video on networks. It has been working in the IP video domain for over a decade. The TriCaster has existed in various forms for twelve years.  It all comes naturally to the company, so while the new IP Series is a big leap for the rest of us, it’s a comfortable progression for NewTek.

But it  really does change everything. It’s as big a deal for live video production as Uber is for urban transportation. There are close similarities. Uber has been immensely disruptive by taking existing extremely high-tech elements (like GPS, wireless networking, Smartphone OSs and UIs) and integrated them into a game-changing ecosystem. It’s a bit like this with NewTek with a single, massive difference: NewTek built everything. From the ground up. That’s why its confident that this is going to work and it’s why external developers, seeing the power that NewTek’s network system, NDI, can bring to them, have jumped on board as partners.

Remember: anything that “talks” NDI can communicate and exchange real-time video with any other NDI device. I wouldn’t be surprised to see cameras supporting the protocol before long. Just imagine: instead of having to feed a physical SDI cable from the camera to the switcher, all you’ll need to do is plug it into a network socket — any network socket.

What NewTek has done here is jump into a new paradigm, and its done it in an almost painless way. The IP series includes complete backwards compatibility with the world of SDI, even bringing network flexibility to “traditional” video devices through the IP system input and output modules. What it has also done is transformed IP video from being little more than a curiosity to a practical technology that is absolutely compelling for new studios.

As we’ve said, this really feels like something that’s come from the future. But, remarkably, it’s shipping today.