Sponsored: IP will change everything you know about connecting video 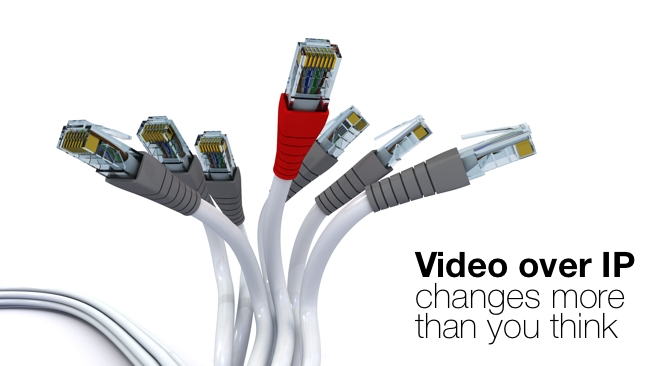 Sending video over IP networks will change everything you know about working with video. Because it's not just about how you connect equipment together; it's about the equipment itself. It opens up new, exciting possibilities. It's a new kind of freedom.

Sending multiple video signals over IP in a live production environment is a pretty radical change. If you think it’s just a matter of replacing SDI cables with network wires, you’re a long way from taking on board the full potential of a move to networked video.

And yet most manufacturers are presenting their video over IP products as precisely that: a somewhat more flexible way to cable up your studio or production facility. Which is, of course, true, but actually only a small part of the story. The reality is that video over IP is going to change the way video equipment works altogether, and in a profound way.

Let’s assume that it’s perfectly possible to send real time video over a network with no visible loss of quality and negligible delay (or latency). There will be some immediate benefits.

When a video signal is sent as packets of data, it can co-exist with other traffic on the network, because each packet has its own source address and destination address. An input only looks at packets from a certain address (although it doesn’t really “look” at all: it merely “accepts” packets from a certain address with its own destination address).

How this works with "signals"

All of this might sound surprising with a “signal”, because we’re used to thinking of signals as continuous, whether they’re analogue or digital. But with IP, each “packet” of data can exist independently. It can even take a different route to other packets from the same signal, as long as they’re reassembled in the correct order at the other end.

This is, of course, how streaming works on the Internet. But there are important differences here, where we're talking about sending digital video over a local, or at least reasonably self-contained, network. The performance of video over this network is going to be much more controlled and deterministic than if it were sent over the global internet, where plenty of factors outside of our control would conspire to downgrade real-time performance. With the video streaming we’re used to over the Internet, you need to buffer the incoming video for several seconds to avoid breaks. With a local network, latency is typically less than a frame, so you don’t perceive a delay.

Let’s go back to the idea that video over IP is going to replace SDI connections. It’s tempting to think that you’d therefore need the same number of network connectors on a video device as the number of video channels it is capable of outputting. And the reason why this isn’t true is the point where it starts to get really interesting.

Think of it like this. Imagine you’ve got some sort of graphics generator. Let’s say that internally, it can produce seven layers or seven individual graphics “objects.” This device might only have four SDI outputs for connection to a video switcher. That means that you’re not using the device to the full extent of its capabilities. You’d have to mix some of these objects internally to get them though only four outputs in real time. That reduces flexibility.

Effectively, with video over IP, physical outputs disappear and are replaced by virtual outputs. In fact it makes much more sense to think of “connectedness” rather than input and output.

It’s just like using a Non Linear Editor or a Digital Audio Workstation (DAW). While a DAW might only have 8 physical outputs, it’s quite possible to have, say, 96 active tracks on the timeline. These “Virtual” tracks behave exactly like real tracks - because they are functionally real. In fact there are ways to connect each of these virtual tracks to other software devices on the same computer, exactly as you’d wire up effects to a real multitrack tape recorder of audio mixer. And you can do this across a network in some cases: multiple connections, back and forth, over a single cable.

Video over IP is going to allow this kind of flexibility, not just within an individual device or computer, but between them as well. With no fixed number of “connections,” a whole facility that’s wired up for video over IP becomes one gigantic workstation, able to connect and reconfigure itself in seconds, as easily as calling up a preset, or as simply as clicking on a list of available virtual sources and destinations (which you can think of as software inputs and outputs).

The consequences of this are enormous. A video facility will no longer be defined in terms of its physical infrastructure, but by the availability of distributed processing resources. It’s hard to imagine a bigger change.

And don’t forget that with an effective implementation of video over IP, such as NewTek’s protocol, NDI, the network is agnostic to frame rate and resolution, with the ultimate capacity of the system being dependent only on the speed of the network. And modern networks are very fast indeed.