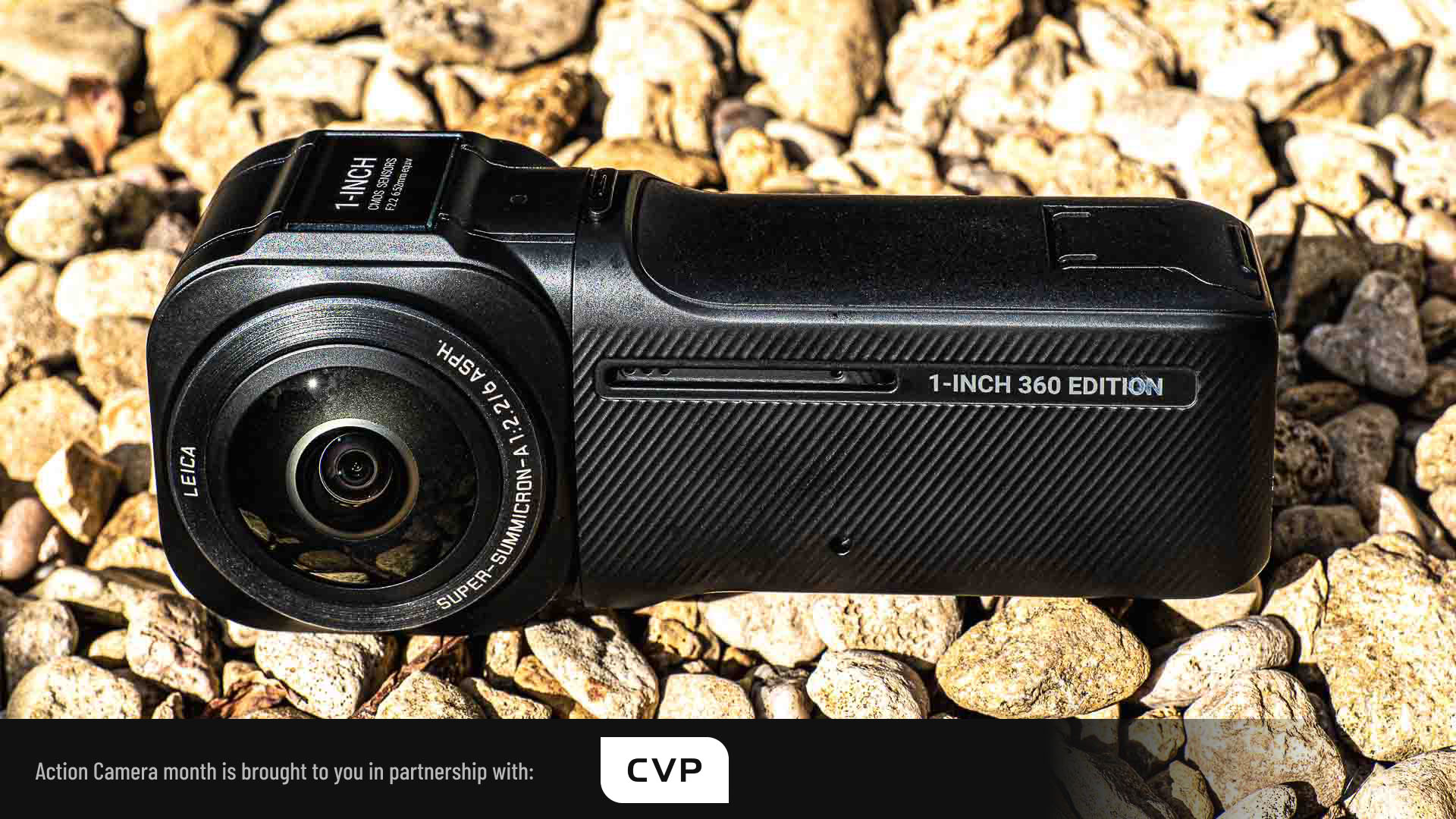 Insta360 has a new ONE RS module, the rather interestingly specced 1-inch 360 Edition. Here's what we think of it.

We reviewed the new ONE RS earlier this year and found it to be a worthwhile improvement over its predecessor. The new core allowed better image processing, giving better detail and image quality, even when used with the older camera modules.

Now Insta360 has decided to increase the image quality possible with 360 video with a brand new 6K 1-inch 360 Edition module for the ONE RS, which has been co-engineered with Leica, much like the standard 1-inch Mod. The advantages of doing this are obvious on paper, with better detail and much better low light performance being possible. But, how does it stack up in reality? 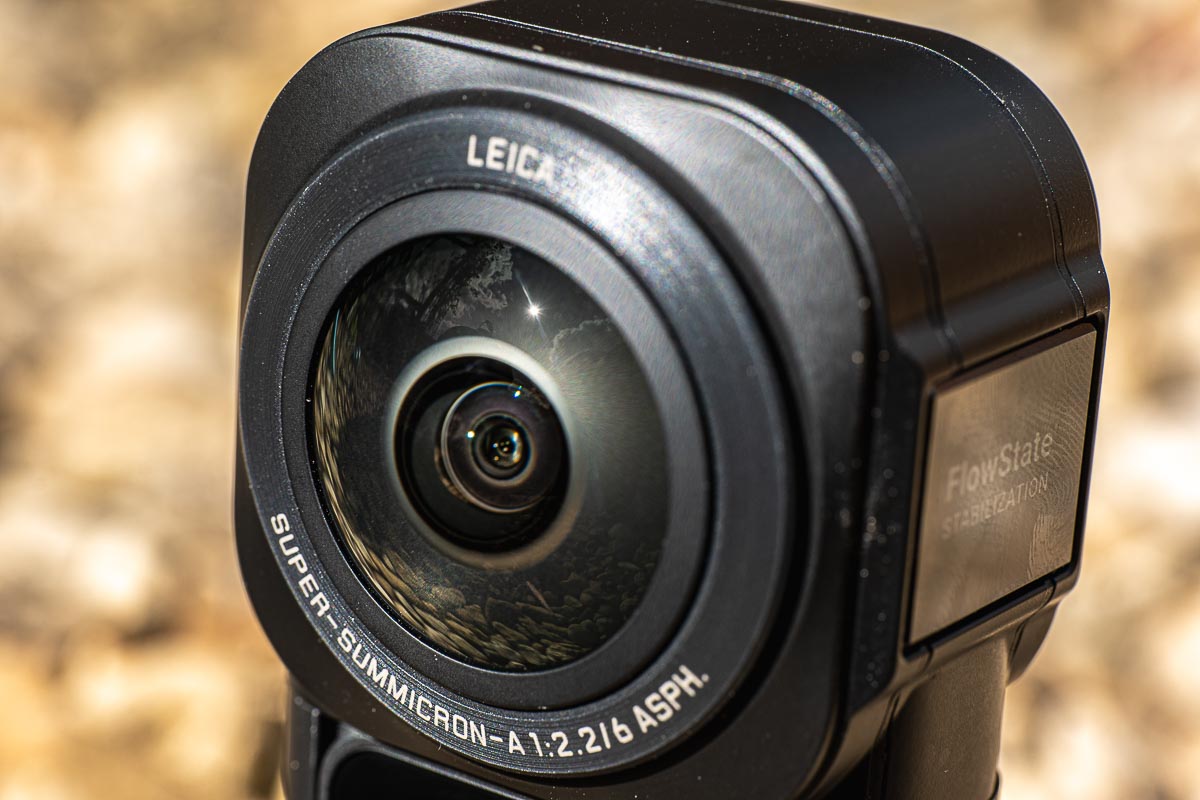 Me Leica this lens. The 1-inch 360 Edition is certainly bulkier than the standard 360 module.

First impressions of the 1-inch 360 module

There's two things to note here. The first is that the vertical battery is not the same as the original ONE R vertical battery base: This is a new one with a higher capacity. The other thing to note is that the 1-inch 360 Edition can only be used in a vertical configuration. What this means is that the new system is rated for IPX3 weatherproofing rather than being fully waterproof and submersible like the standard ONE RS setup. I hope that there will be some sort of full waterproof solution in the future that doesn't require a bulky waterproof housing because I think that full waterproofing should be a priority with this type of camera.

That said, Insta360 is mainly targeting the 1-inch 360 Edition towards the lifestyle market, with vloggers, VR tours and Google Street View content creation amongst the primary user types being aimed at. 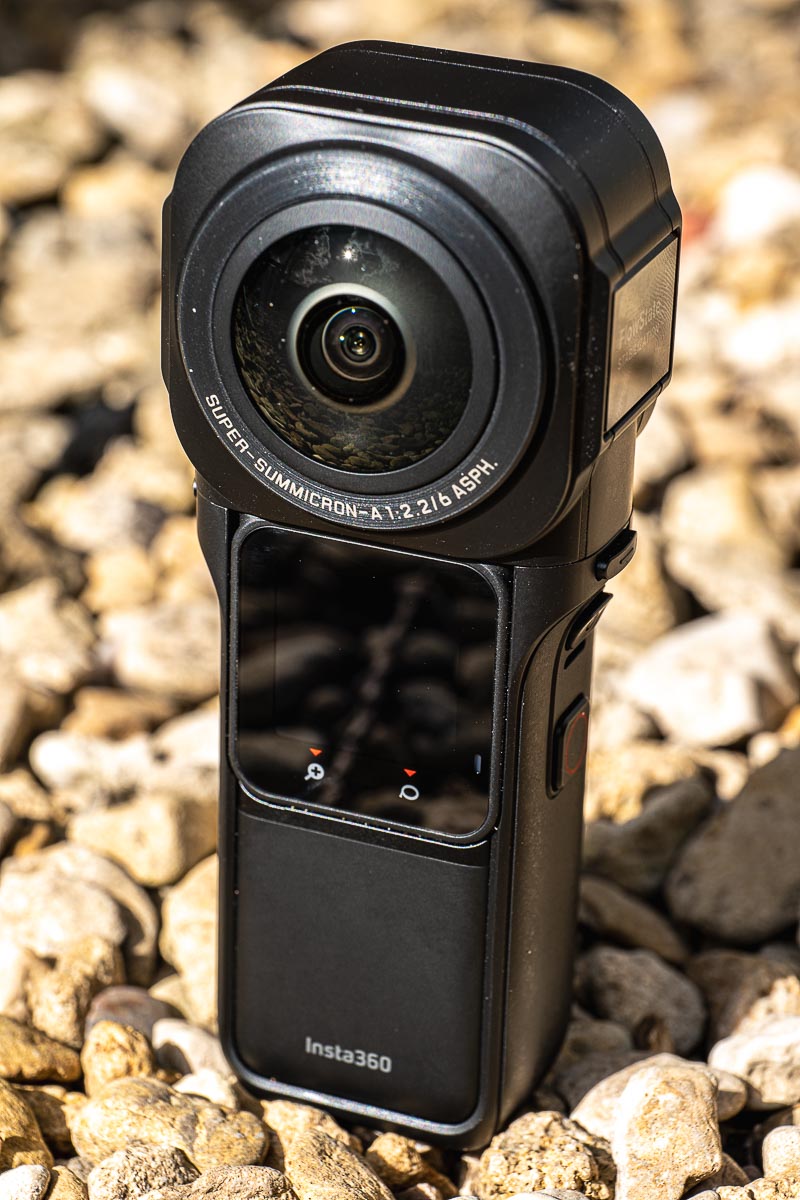 Vertical configurations need only apply. A new battery and an external cage keep it together.

When the unit is fully assembled it's certainly bulkier than with the standard setup. This isn't surprising given the increased lens size that is required to cover the larger sensor. The final resolution of any 360 video file is 6K, with a pixel dimension of 6144x3072 at 24/25fps and 5888x2944 at 30fps. It's possible to shoot at 50fps, but the resolution will drop to 3040x1520.

At the base of the mounting bracket is a small hinged door, revealing a USB-C connector behind it. This can be used to charge or power the unit externally as well as for footage transfer. It's interesting to note that whilst you can charge the unit using a USB-C to USB-C cable in this configuration, if you take the camera out of the mounting bracket you'll need to use a USB-A to USB-C cable. The GO 2 has this quirk, and I'm not sure why, but I hope Insta360 makes sure all future cameras can use USB-C to USB-C cables. 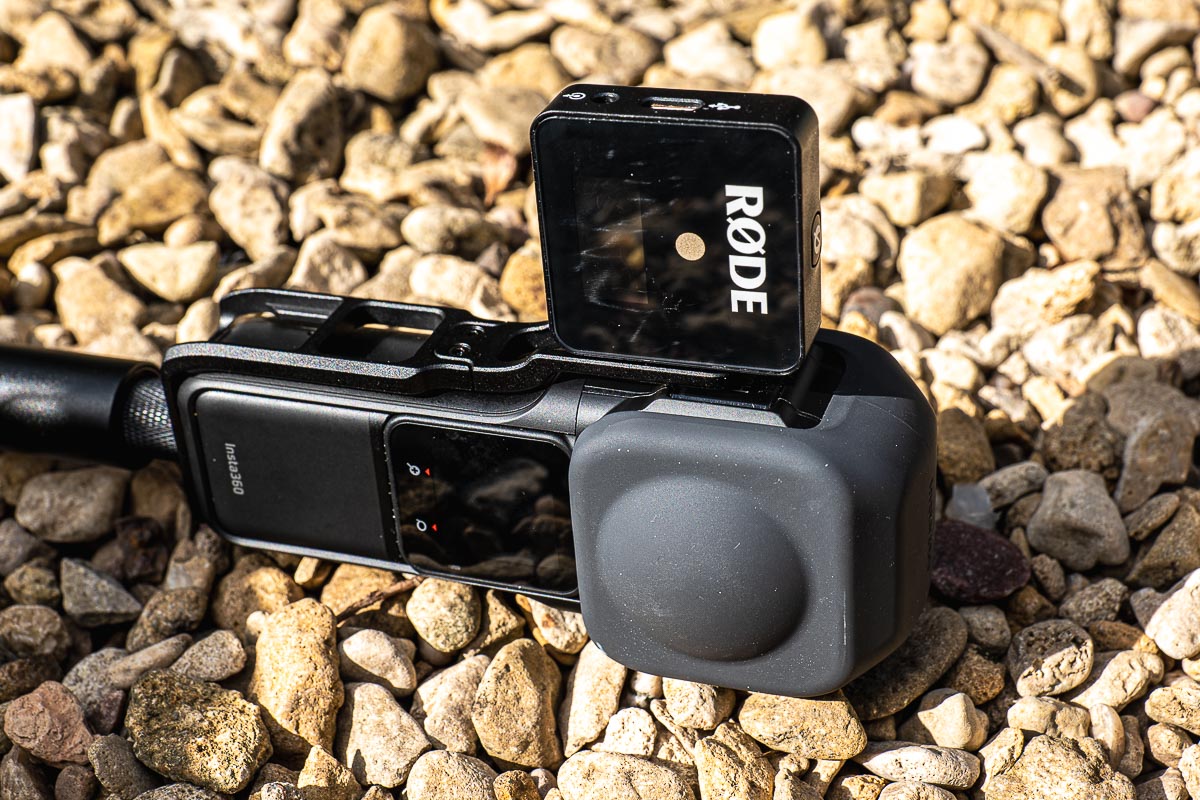 An optional bracket allows the attachment of the RØDE Wireless GO series mics without interfering with the 360 abilities of the camera.

The standard 360 unit is improved quite a bit when connected to the ONE RS vs the ONE R, but I'm still awaiting an action camera sized 360 camera that can produce a detailed reframe without mushiness. So I looked forward to testing the new 1-inch 360 module to see how it compared against the standard one.

I'm pleased to say that despite only a modest increase in actual resolution, the image from the 1-inch 360 module is noticeably and substantially better than the standard 360 module. The image is much sharper, and much more detail rich. It's a good illustration of why it's better to have better quality pixels rather than simply more of them. The images below show a screen grab from within the Insta360 Studio desktop software comparing the standard 360 module with the new 1-inch version, and I think you'll agree that the differences are very noticeable.

These video images were taken with both cameras set with a sharpness of Low and the colour profile left in Standard. Insta360 recommends setting the sharpness to Medium, however, as per my review of the ONE RS, I much prefer to set it to Low and then dial things in during editing. Ignore the colour differences. I applied "Colour Plus" to the Standard 360 grab. 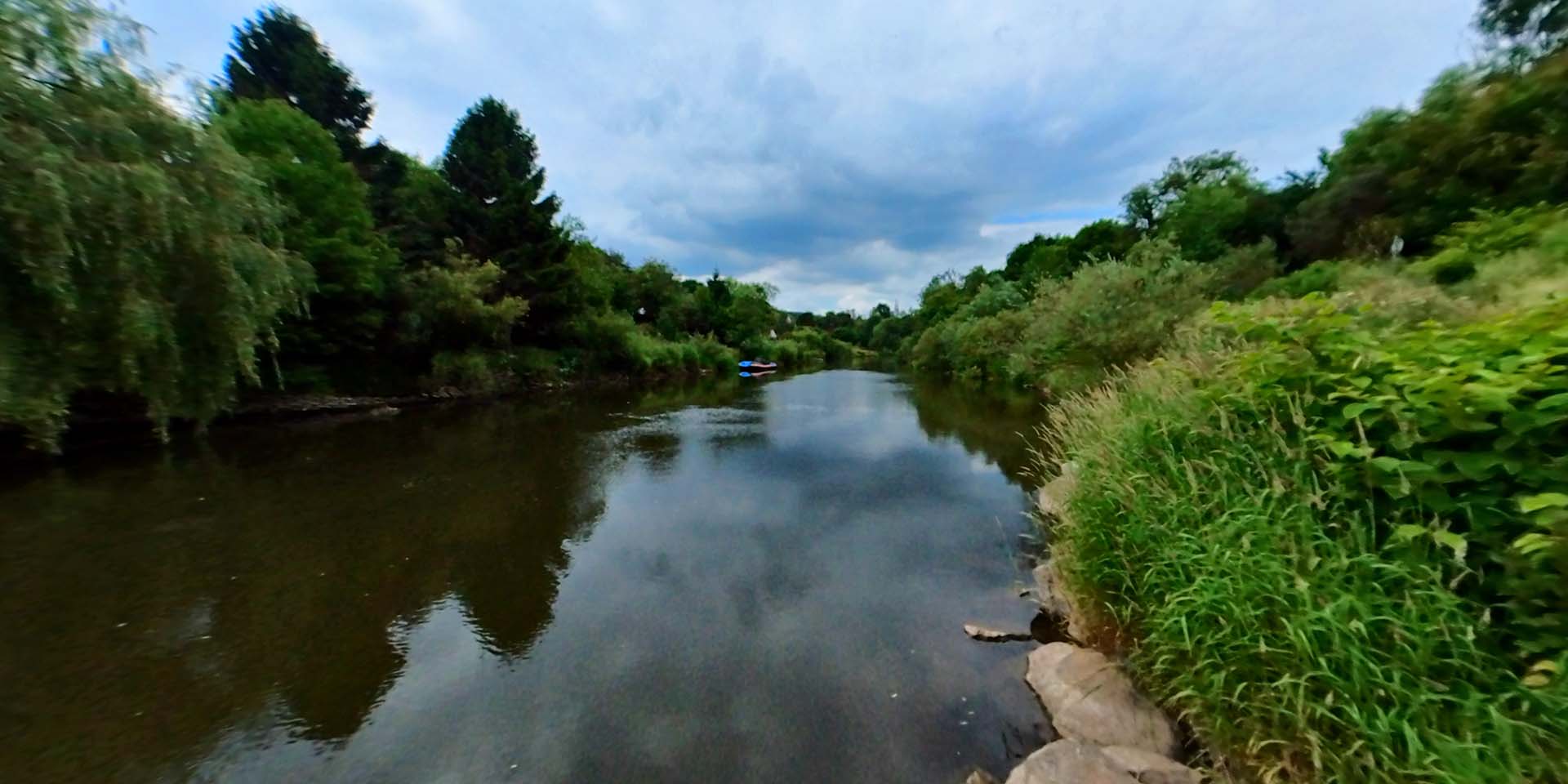 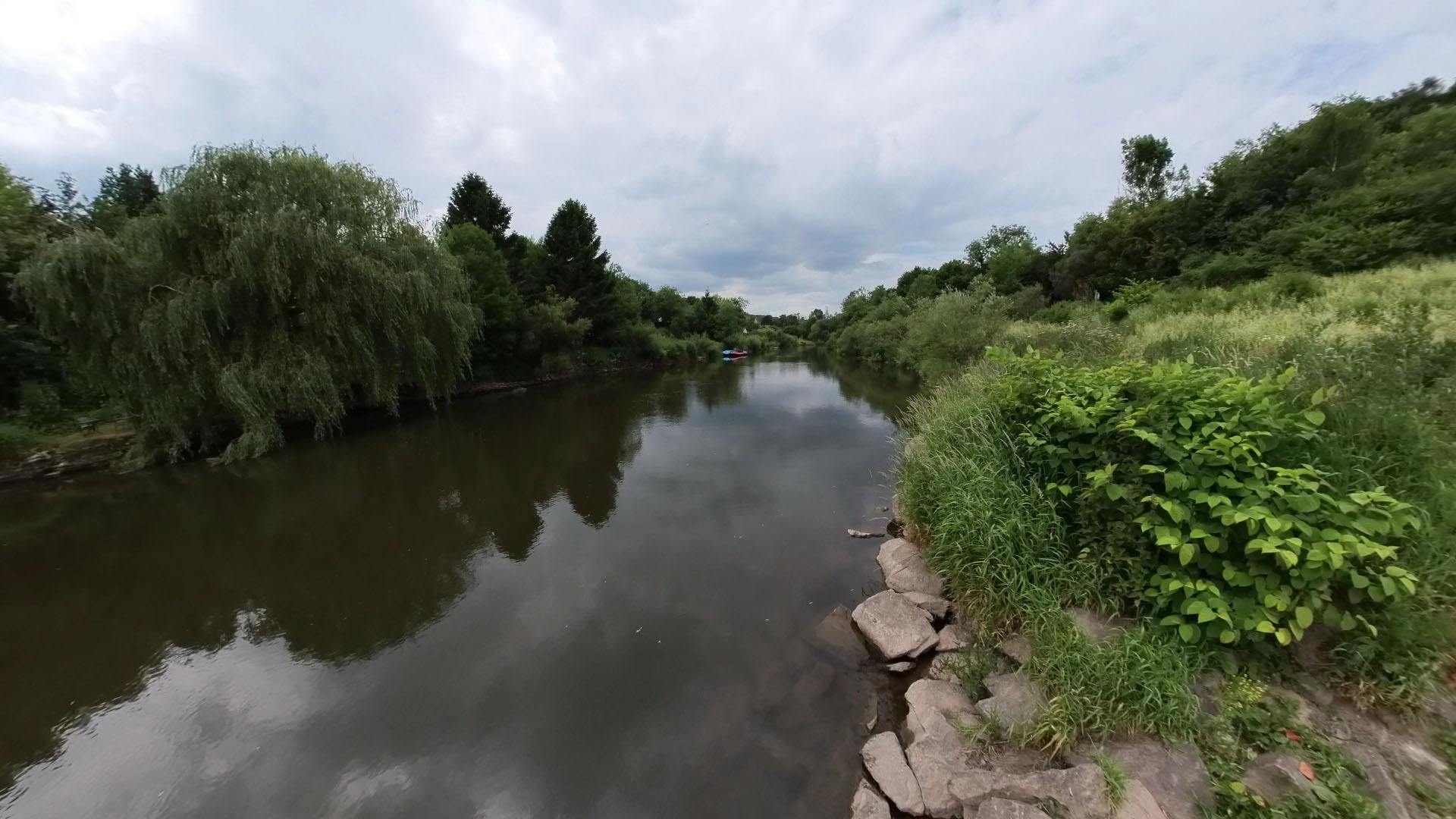 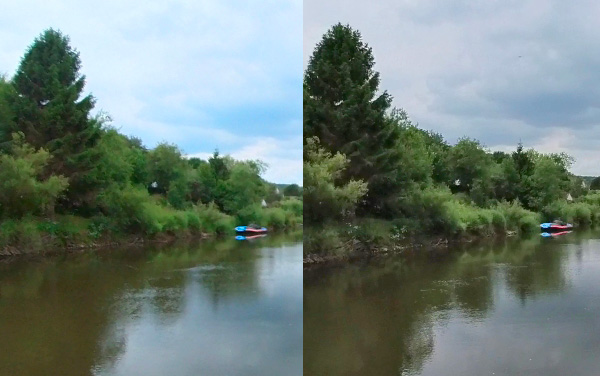 100% crop side-by-side. You can see just how much more defined the detail and texture is on the 1-inch 360 Edition on the right. I've lifted the shadows a bit for a closer comparison.

I've uploaded an example 360 video below from one of the training sessions for the ICF World Canoe Freestyle Championships being held in Nottingham, UK this week. This was given a basic colour correction in FCP due to the rather dull nature of the weather, and a smidgen of sharpening before being uploaded to YouTube as an equirectangular 360 file.

Stitching quality seemed very good to me, as long as you keep important objects to at least 0.5m away from the camera, particularly when using the desktop software's Optical Flow stitching and chromatic calibration.

The 1-inch 360 module won't be for everyone. If you're using the camera around water you'll need to stick with the standard version. However, for lots of other uses the 1-inch 360 modules offers a noticeable increase in image quality. It works very well for vlogging using the optional RODE GO and GOII wireless receiver bracket, which ensures it can't be seen by the 360 camera.

If you require a 360 camera for more professional purposes but can't stretch to one of the high end professional models, the ONE RS 1-inch 360 Edition looks like it's going to be a good substitute. Now I'm just waiting for my 8K 1-inch 360 module with full waterproofing and hydrophobic lenses! But for those who shoot more lifestyle video or want to produce higher quality VR tours, this new module from Insta360 offers a sizeable increase in image quality over the standard version. You'll also benefit when taking low light shots, such as 360 night-lapses of the stars.

The Insta360 ONE RS 1-inch 360 Edition is available now for $799. Existing ONE RS and ONE R owners can purchase an upgrade pack, which includes the lens, battery and mounting bracket for $649.99.