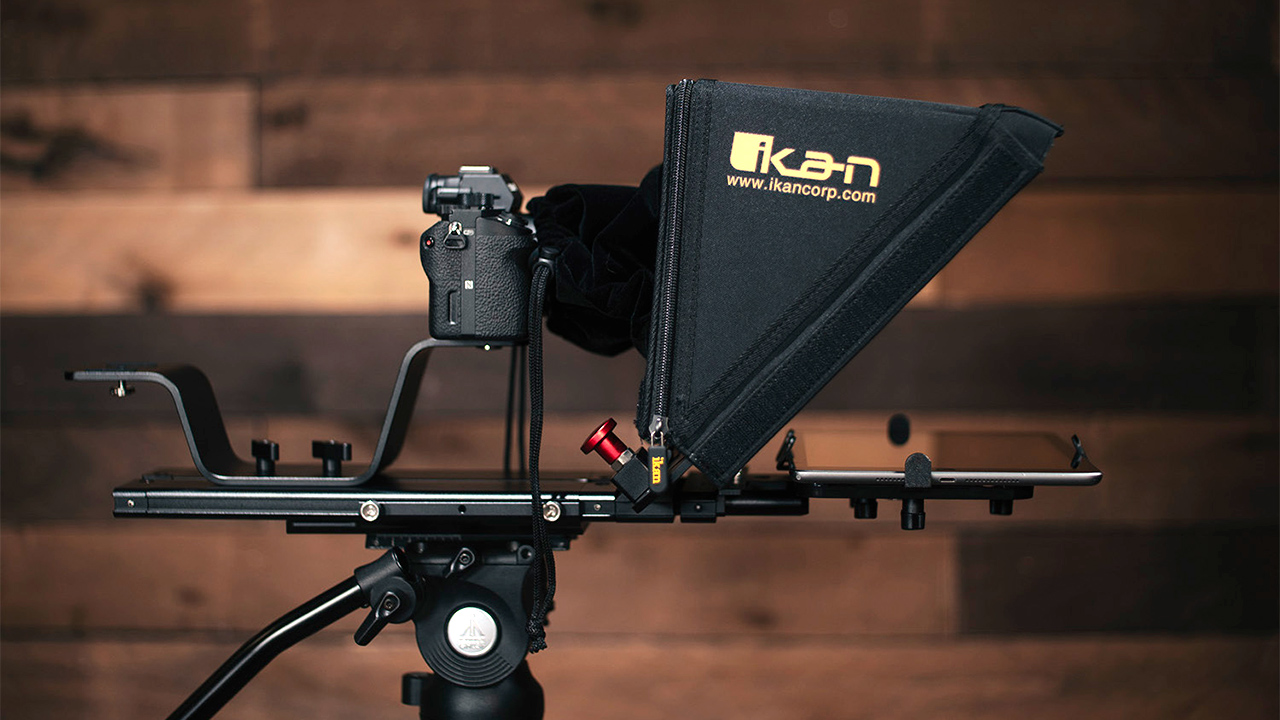 Banish those YouTube style jump cuts and do things properly. Nigel Cooper looks at a rather clever mid-budget Teleprompter, the Ikan PT-Elite-Pro2, that even recognises your voice.

There’s no doubt that teleprompters have improved in design, got more compact, and have come down in price over the years. And with the latest voice-recognition prompting software there has never been a better time to look at buying a teleprompter than right now.

Most modern teleprompting systems work around an iPad/tablet and this is the case with the Ikan PT-Elite Pro 2 teleprompter. The PT-Elite Pro 2 comes in at $799 (£700 UK) and is designed to accommodate tablet sizes from 6x9 up to 9x13 inches.

For the most part the construction and build quality of the Ikan is top notch, machined from aluminium and steel parts and it’s bolted together really well with a superb quality, and rather clever, magnetic hood. The tablet platform itself is plastic, but a good quality plastic.

Assembling the PT-Elite Pro2 is a straight forward affair that involves slotting the metal-framed beamsplitter glass onto the main body of the unit, which is done by pulling up a large red aluminium spring loaded knob, slotting the metal part of the glass frame into the grove while aligning up the hole and releasing the red knob to engage. Fitting the hood is simplicity itself thanks to Ikan’s clever magnetic design. Getting it into shape is simply a case of zipping the two sides down to form a nice sturdy hood. The hood is then positioned in the approximately vicinity of the metal frame of the beamsplitter to allow the magnetic strips to suck it right into place – voila. 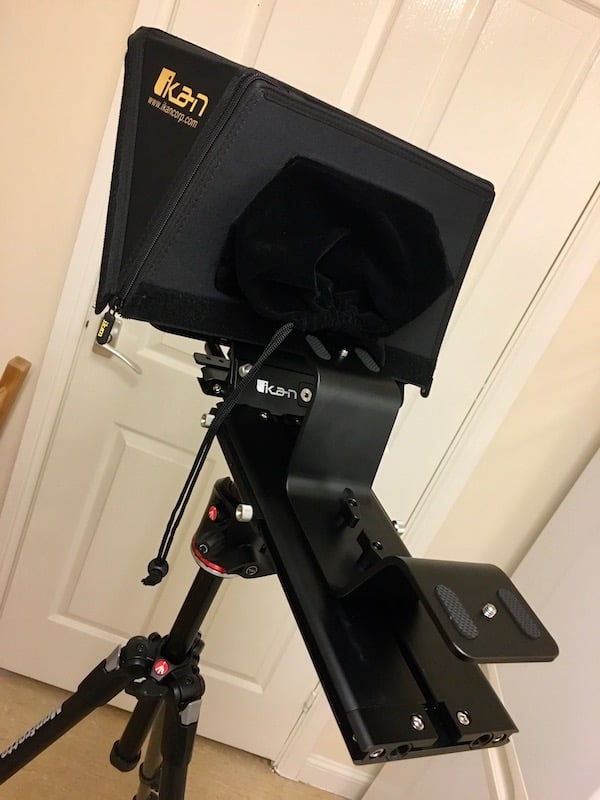 It’s possible to slide the whole unit back and forth on the sub-platform by loosening the four knurled aluminium knobs; this allows the whole system to be balanced the tripod. Having said that, with the Panasonic GH5 with 12-35 f2.8 attached the unit was a little front heavy, even when it was slid all the way back. If you have an Arca Swiss tripod head you might be able to slide the unit back and extra centimetre or two, which should help. If you use a longer lens (which would mean sliding the camera back further) then balancing will be easier.

Regarding the glass beamsplitter – and for me, this is the most important part of any teleprompter – it’s all good. I’ve used and tried many different makes and models of teleprompter over the past 25 years and most of them are excellent, but some out terrible. If the beamsplitter glass is of poor quality, or a poor scientific design, you can lose two stops (sometimes even more) of light and you can also get a colour shift and you can also get a softening effect meaning you lose sharpness and detail. One particular budget model I tried about four years ago was so bad it looked like it had a mild Gaussian blur effect added, but the Ikan USA-made beamsplitter is right up there with the best I’ve ever seen. It only loses approximately one stop of light and, trust me on this, with a 70/30 split beamsplitter this is as good as you will ever get.

Same goes for the colour shift. It’s there, but it is subtle and a lot of people would not even bother to correct it in post, at least no more than you’d correct colour in any other footage you’d shot and I’ve yet to find a teleprompter that had zero colour shift. Same goes for the softening effect, there was no noticeable loss of detail or sharpness, well, if you zoom in 200%, but it is negligible and, again, this is as good as I’ve seen. When push comes to shove, if you are going to stick a piece of 70/30 split mirrored glass, at a 45 degree angle I might add, in front of a camera lens something is going to give but, thankfully, with the Ikan that give is at the tiniest of tolerances end of the scale making this beamsplitter very high quality indeed.

Remember those hand-held scroll wheel devices? Well these days all you need is your voice, at least with the PromptSmart Pro teleprompting software that I am using with the iPad and Ikan teleprompter. PromptSmart Pro is built around a voice-recognition system that automatically scrolls the text as you speak. If you read the script slower it slows down, if you speed up, it speeds up. I had the iPad mounted in the Ikan a good 15 feet across the room for test purposes and the iPad’s tiny build-in mic did a great job of picking up my voice to allow the PromptSmart Pro to follow me, even when I spoke quietly. I did in fact buy a TRRS lav mic and an extension cable suspecting that the iPad’s mic would not cut it, but it turned out I didn’t need the lav mic and extension cable, but the option is there if you want it. The PromptSmart Pro app is available from the App Store for $19.99 (£19.99 UK).

View my video demonstration of the PT-Elite along with the PromptSmart Pro software below.