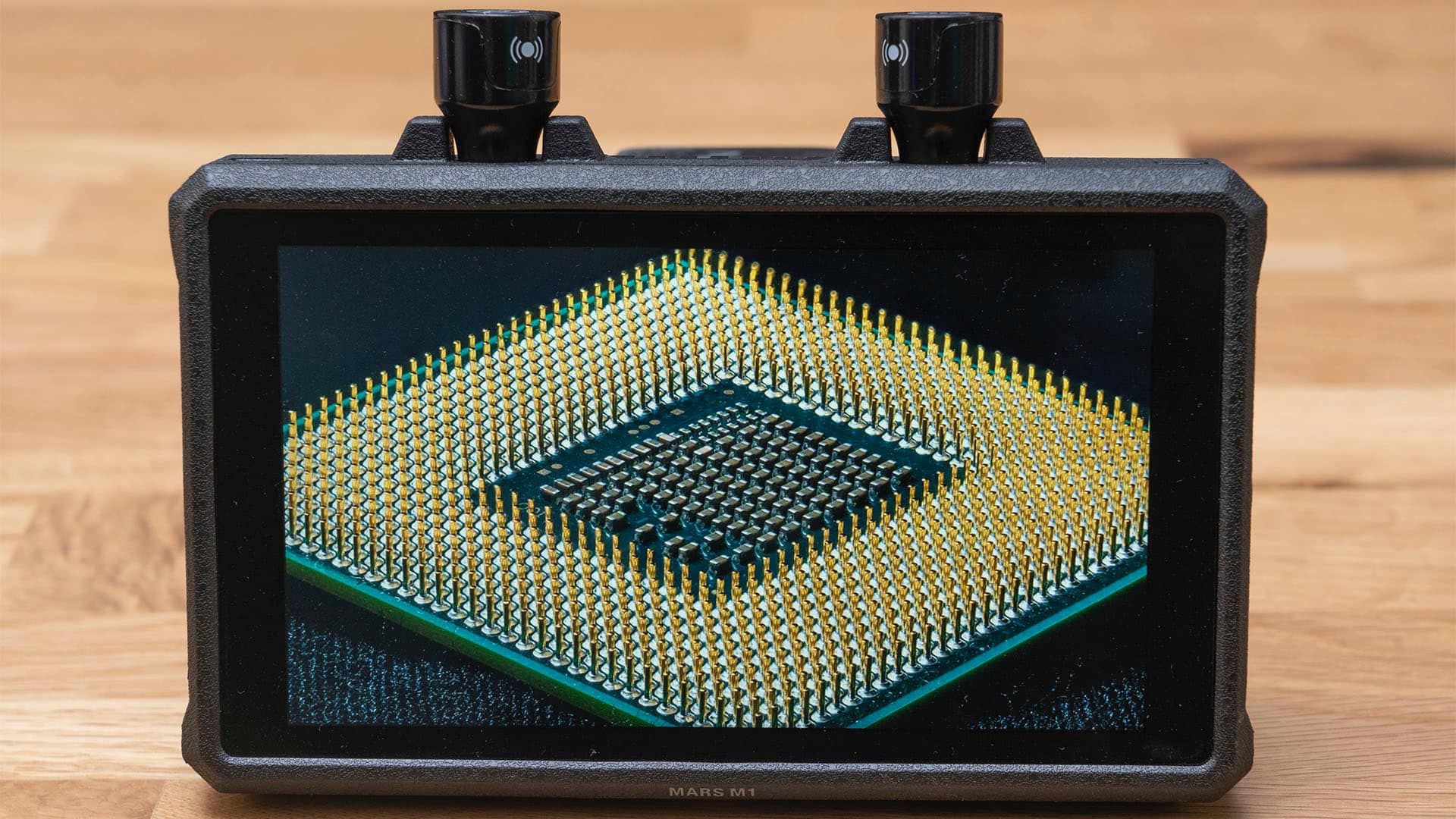 The market for reasonably priced wireless monitors has opened up over the last few years and, never ones to ignore the demand, Hollyland recently launched its new Mars M1 monitor with transceiver function.

The 5.5” 1080p Mars M1 monitor has a built in transmitter and receiver enabling it to act at either end of the wireless chain. For the price ($549 or equivalent) it has plastic externals with a textured bezel for protection. The surround does it’s job well though, as I found out when the monitor took a tumble from around 1.6m on to grass with no ill effects.

There are 2 x 1/4" screw thread mounting points, one on the base and another on the side.

The M1 includes full size HDMI sockets with loop through and an SDI input, as well as the ability to be powered either by a Sony NP-F type battery or via a DC barrel plug. It also includes an additional DC port to support powering external devices via a loop through at 8.4V at up to 1A. Instead of the usual antennas used in other Hollyland products, in wireless mode the M1 utilises stubby lollipop antennas using standard SMA connectors.

It also has a USB-C port and a 3.5mm headphone socket although It should be noted that the 1/4” screw socket on the right hand side is very close to both of these, so use of it may well limit access to those ports with some mounts. Included in the box are also a USB-C to A on the go adapter, more about that later and a barrel plug to D-Tap cable. It’s good to see that Hollyland include a screen protector as well.

Adjusting the settings is done via the touchscreen, the dismissible overlay allows you to control a lot of functions. This includes the usual suite of things, waveform, histogram, focus peaking, false colour vector scope, red green blue only, aspect overlays and various anamorphic de-squeeze options. The headphone volume and brightness level adjustments are a little buried, they can be found in the settings part of the menu.

There is a built-in fan with control in the menu, although it only offers two options, auto or mute. Given the brightness at full intensity I would be cautious about disabling this for extended periods, especially in raised ambient temperatures. You can certainly hear the fan working, it kicked in after six minutes for me with the brightness set to 20, and that was inside with an ambient temperature of 21 degrees. It doesn’t ramp up either, it’s either on or off.  Outdoors in direct sunlight with brightness set to max you can see an image but it’s not that clear and the screen (without the protector) is quite reflective, but that’s not unusual.

The included OTG adaptor can be used in combination with a USB-A flash drive to upload new LUT files, replacing the built-in ones.

There are a few other foibles as well, for example the zebra function, whilst being adjustable gives no numerical readout as to where it is set, it’s just a slider. The peaking control acts in reverse, the lover the slider the higher the effect although I’m told that this will be sorted out with a firmware update. If you want to use it wired you have to remember to turn the monitor back to being a transmitter there is no auto fallback if you have it set to being a receiver, that had me stumped for 30 seconds. 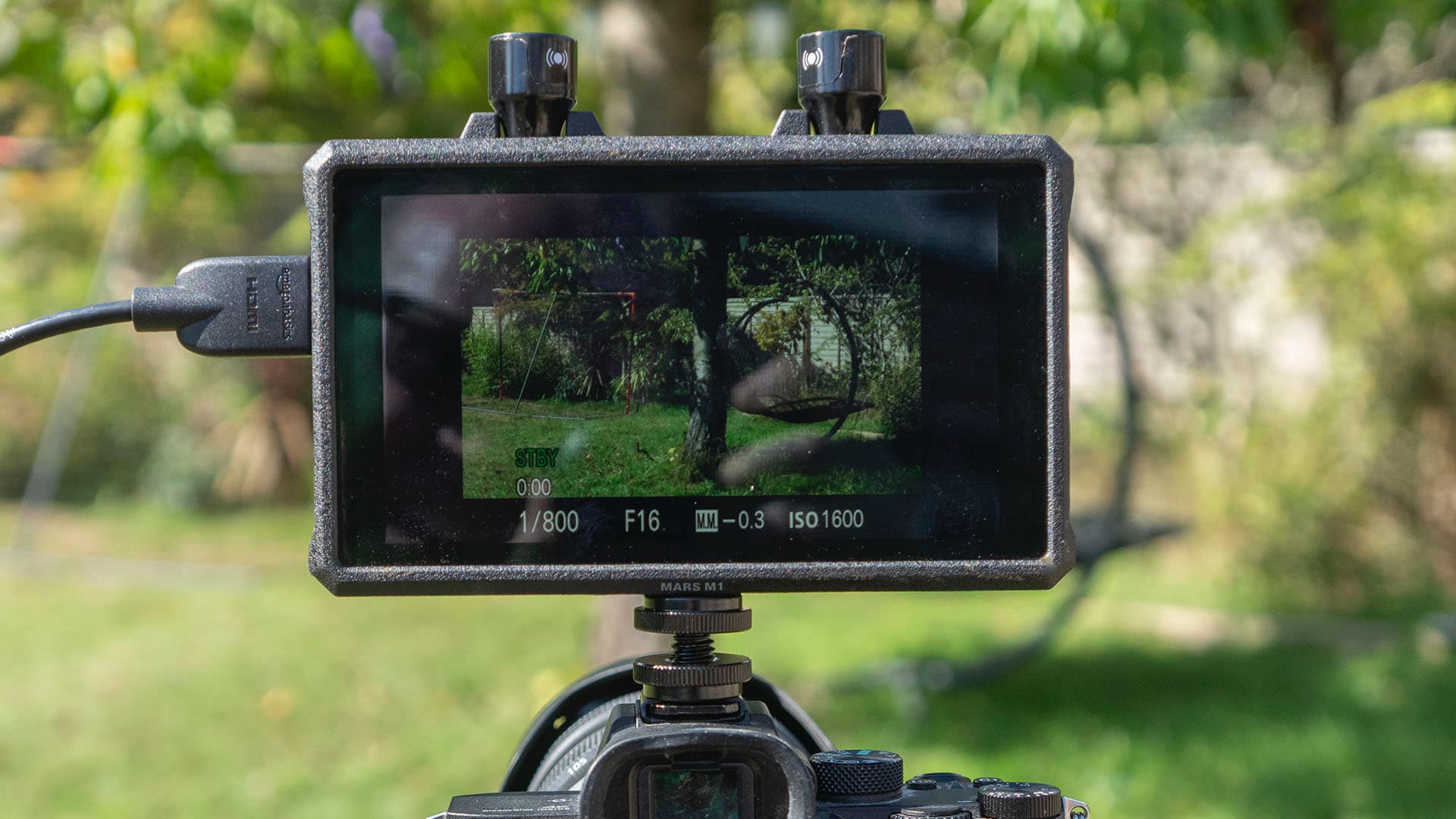 The Mars M1 can be used with Hollyland’s other wireless products or when used as a transmitter can also be paired with the HollyView app. In my tests I used it with both the new 4K and the 400S pro with no issues. Pairing is simple, achieved through the settings part of the menu, where you can also set a manual channel if required.

As for distance, I managed 125m (410 ft) using the M1 as a receiver and 140m (458ft) using it as a transmitter, in both cases pairing it with the Hollyland 4K. I managed to get around 55m (180ft) when using the Hollyview app on my phone to monitor the signal. As for battery life, I got just over 4 hours 40 minutes when using a 3rd Party NPF 960 type battery and setting up the M1 as transmitter at 50% brightness.

Running a colorimeter over it I was a little surprised with the accuracy figures, at 100% brightness the delta E error of 2.5 was a lot better than I was expecting. Set at this level it has a stated brightness of 1000 nits and a contrast ratio of 1000:1, in my testing it achieved over 1000 Nits and a contrast ratio of over 1200:1, although this wasn’t ANSI contrast though as the screen was too small for my meter.

As for latency, when connected directly over HDMI the monitor on it’s own added 3 frames to any existing system latency at 60fps, and when used wirelessly it added an additional 2 frames (16.66ms) which in my case meant a total of 5 (83.33ms), not too bad at this price level for a compressed system.

A look to the future

As for improvements, well maybe Hollyland could include a small USB-C flash drive instead of the on the go adaptor?, I’d also liked to have seen a couple of physical buttons that could be assigned to shortcuts and a recording function would have been a nice to have feature. Given the size and price and what’s included here then I’m really interested to see what the company might have up its sleeve.