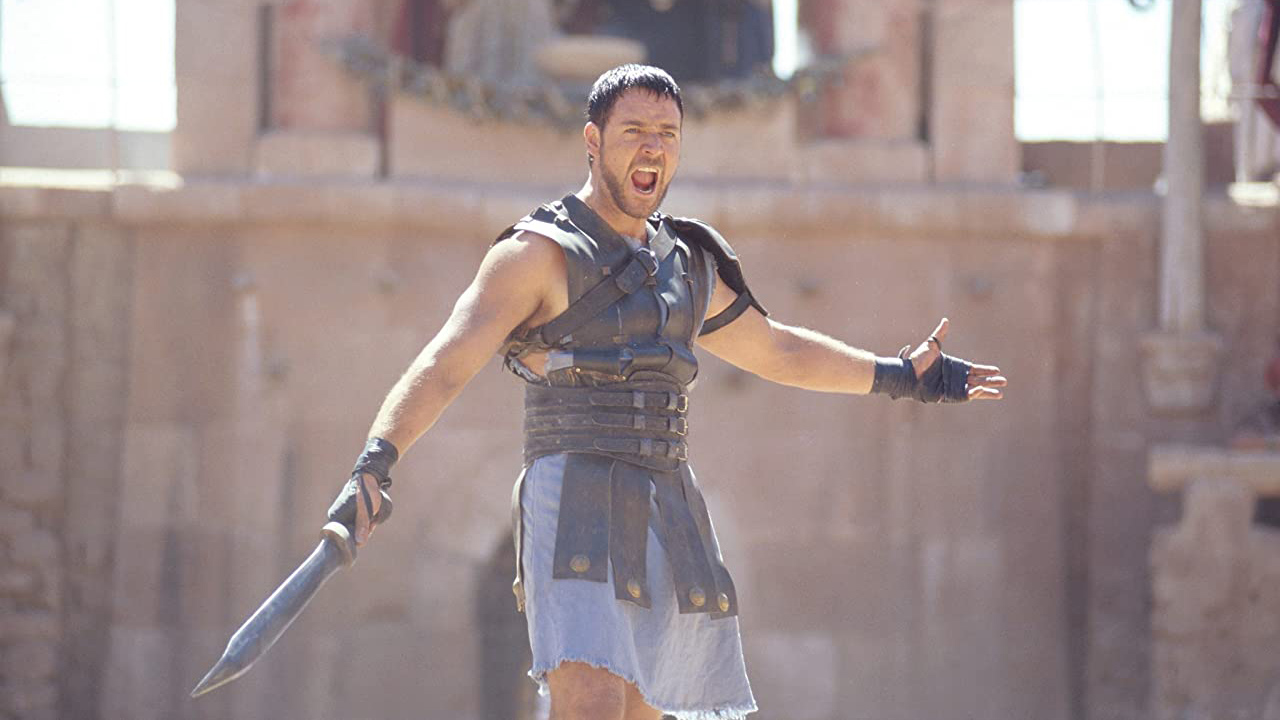 The audio in Gladiator, 20 years old this year, still stands up today as an exceptional soundtrack. Here's how it was all put together.

Early on in Ridley Scott's Gladiator (2000), as a Roman legion prepares for battle in Germania, stoic general Maximus Decimus Meridius (Russell Crowe) utters the now much imitated instruction, "At my signal, unleash hell." Visually this comes as flaming missiles catapulted at the enemy and centurions, both on foot and horseback, charging forward. But it is made all the more hellish by the accompanying sounds: the roar of the flames, the flight of arrows, the noise of horses and dogs, the clang of metal on metal and the altogether queasier sound of swords hitting flesh.

This year sees the film's 20th anniversary and while the visual grandeur is still impressive, some of the CGI does look almost as dated as effects in the sword, sandal and toga epics of the 1950s. The sound, on the other hand, still stands up and makes a considerable contribution to the storytelling and creation of place. This is particularly true of the Coliseum scenes, in which the Dolby Digital EX mix (an extended format delivering 6.1 or 7.1), envelopes the audience in the noise of the gladiatorial games.

Maximus is forced to become a gladiator after the deranged Commodus (Joaquin Phoenix) engineers his downfall and sells him into slavery. This follows Commodus killing his father, Emperor Marcus Aurelius (Richard Harris), who had wanted Maximus to succeed him, and then ordering the murder of Maximus' family. This plot takes massive liberties with historical truth but there is authenticity in the staging of the film, which extends to the sound design.

Speaking in 2000, supervising sound editor Per Hallberg said that Ridley Scott wanted to make the audience feel as though it was in the settings, particularly the Rome sequences. "Rome at that time held over one million people of different languages and cultures," he explained. Tracks were built up of all those diverse voices, along with the sounds of animals and constant building, making the narrow streets seem even more crowded.

Hallberg commented that the aim was to have an "organic, natural sound" in all scenes apart from the dream sequences, which are mostly carried by music composed by Hans Zimmer and Lisa Gerrard. Audio was built up from a single voice and then adding more to create both the city of Rome and what Hallberg described as the most multi-layered soundtrack he had worked on.

Dialogue and Foley were prepared in Cyberframe/Waveframe workstations, with many of the big sound effects laid on to Pro Tools. A total of 18 eight-track pre-dubs, with three being just crowds, horses and chariots, was re-recorded at Todd-AO West in Los Angeles. Scott Millan mixed dialogue and music while Bob Beemer handled effects, backgrounds and Foley, which comprised footsteps, movement and some elements of sword hits and impacts seen as additional to the primary 'hard' effects.

The action in Gladiator takes place in several locations, including Germania, Southern Spain and North Africa, each of which has its own sound. The focus for most of the film, however, is Rome. The centre of the Empire has several sounds to characterise its different sides. These are vastly contrasting; as Senator Gracchus (Derek Jacobi) remarks, "The beating heart of Rome is not the marble of the Senate but the sand of the Coliseum." To reflect this the scenes in the Senate are quiet and almost serene, matching the cool marble surroundings.

The Coliseum was a much more brutal and living environment. It could hold approximately 50,000 people and former gladiator Proximo (Oliver Reed) describes the roar of the crowd rising up "like a storm" when combatants walk into the arena. Hallberg told me that Ridley Scott wanted the Coliseum audience to be a character in the film but knew that trying recreate what the blood-thirsty spectators sounded like was not going to be straightforward. "We tried using material from modern day arenas," Hallberg said, "but we couldn't have whistling on the soundtrack. In Ancient Rome they booed instead. So we had to create the size of the audience and all the specific reactions."

A foundation was laid by recording 2000 extras in a stadium on Malta. Later a recording session was set up in LA with another 200 extras on a sound stage to provide reactions and chants. In reality a large number of people shouting or singing can end up sounding incoherent because the timing is lost and the words jumble on top of each other. To avoid this, three levels were created in Pro Tools: the crowd noise; a medium-sized sound for variation; and more specific, close-up reactions. These could be selected according to the scene, with the mixers having control at all times.

The baying of the crowd is augmented by the clang of swords, body blows and, in one scene that really shows up how much compositing effects have moved on in 20 years, tigers. Present throughout most of the scenes is Zimmer and Gerrard's score, in a nod to the epics of old in which music played continuously. It takes over from sound effects in certain sequences, with some of the cues prefiguring the strident, anthemic style that Zimmer and other composers would employ for the Pirates of the Caribbean films.

Gladiator was much anticipated, partly because critics and film fans were curious as to whether the untimely death of Oliver Reed during filming would have any impact. Most of the actor's principal scenes had been shot but the gaps left were filled by using CGI to superimpose his face on to a stand-in. There was also the need to fill in some dialogue, the majority of which was constructed from existing takes. "What we really needed were reactions, like grunts and shouts," said Hallberg. A LA voice artist who could sound like Reed was brought in for this, with the tantalising suggestion that he did impersonate the late hell raiser for one line.

Back in the late 90s the most up-to-date technology was used to recreate the sounds of an ancient world. Today the Otari and Harrison consoles, Tascam dubbers and Dolby Digital EX, DTS and SDDS audio mastering might be regarded as pretty ancient itself - but it did produce something dramatic and evocative that still stands up today.