We find that Fujifilm's X-T4 is a well featured, high performing hybrid mirrorless camera with the added bonus of high frame rates.

Fully twelve years after Canon accidentally invented the video-capable DSLR, we’re getting pretty used to the idea of stills cameras that shoot video, and there are many good ones. So, when a company – even a company with the history of Fujifilm – offers the world another new option, it has to work quite hard to impress us. Read on to find out if the X-T4 does that, but first, watch some test footage shot with the Sirui 50mm 1.33:1 anamorphic.

What we’re mainly interested in are the video features; the X-T4 has been widely reviewed as a stills camera. It’s an APS-C (roughly Super-35mm) mirrorless camera with Fujifilm’s X-mount, which is similar to other shallow mounts such as Sony E or Micro Four-Thirds.

The X mount hasn’t the same market penetration as some others – it doesn't appear in the comprehensive list at lensadaptor.com – but it should be possible to build adaptors from popular mounts such as PL, Nikon and EF to suit X-mount cameras. 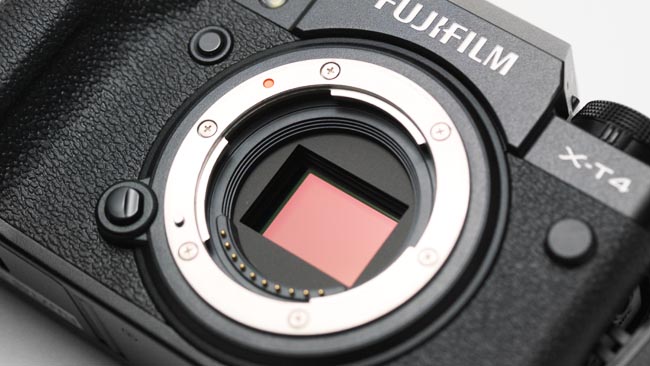 If there’s a headline feature, it’s the 240fps HD shooting, which isn’t buffered; you can shoot 240-frame material until the SD card is full. Doing that requires moderately high end UHS-II SD cards, so the price advantage of SD is slightly offset, but the X-T4 remains reasonably cheap to feed. The downside of this is that the 240-frame option only exists when the most frugal recording bitrate is selected. That means inter-frame compression, 8 bit 4:2:0 and 20Mbps effective data rates on playback (the advertised 200Mbps is the record data rate, so it’s essentially divided by ten on a per-frame basis if we’re shooting 240 for a 24 finish.) 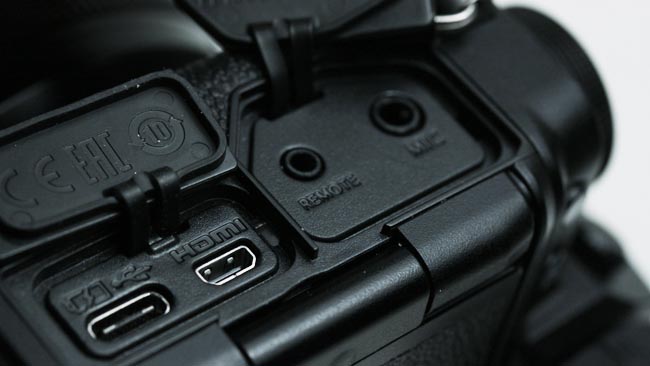 Side ports on the Fujifilm X-T4.

On the upside, the camera will record 10-bit, 4:2:2 4K at 60fps internally to either HEVC or H.264 at a healthy 400Mbps, and there is unadulterated HDMI output of 10-bit, 4:2:2 pictures for external recording (no talk of raw, but it’s presumably possible). There’s a variety of cinema and television-oriented frame sizes around HD and 4K widths, though there are (sensible) limitations on log recording of the high-dynamic-range HLG format in H.264. It is possible to shoot 4K while outputting HD, which is handy for certain monitors or transmitters.

LUT handling is above average. We’re never going to have fully separated viewfinder and output modes on cameras with single-digit power consumption, although there is an option to record log while monitoring a more conventional picture on the HDMI output, or vice versa. That’s good.

The company uses a roll-of-film icon to indicate “not log,” and uses the the Velvia and Eterna names to describe the non-log looks on offer. The supplied cubes include log to 709, simulating Eterna with or without a bleach-bypass effect, and log to a “WDR” 709 for a wider dynamic range, less literal 709 interpretation. There’s also one that converts Fuji’s gamut to 709 gamut while leaving the brightness alone. All worked fine in both Resolve and SmallHD’s 1703.

Pictures are smooth and quiescent, being based on a sensor with lots of spare resolution. Maximum tolerable noise is a matter of opinion, but much of the accompanying high frame rate material was shot at 2500 ISO in order to retain comparable exposure with similar shots taken at conventional frame rates. There is little or no visible noise reduction and the pictures are subjectively nice.

The DSC Labs ChromaMatch chart, viewed on SmallHD’s scopes, suggests that the X-T4 desaturates red-orange-yellow colours – that is, skintones - at higher brightness. It’s a common technique presumably intended to minimise artificiality in skin rendering as it approaches overexposure. 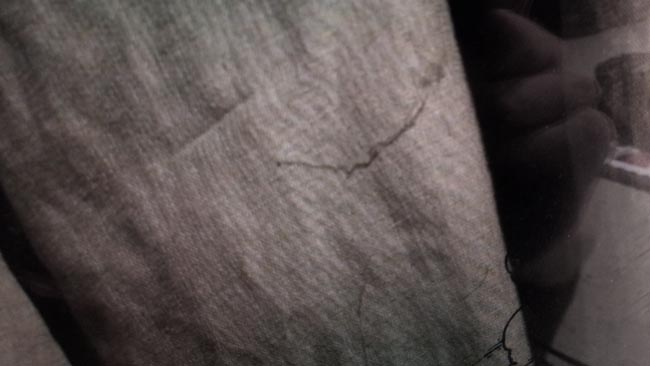 Some moire was visible with the X-T4 on fine detail such as this woven cloth.

There’s a pleasantness to the colour rendering that could be described as warm, though without meaning to imply anything about colour balance. About the only downside is a noticeable amount of moire on subjects such as woven cloth with a repeating pattern, which is a bit of a shame as the pictures are otherwise very good. That doesn’t happen with stills, so it’ll be an artefact of the way the lower-res moving image is picked from the X-T4’s 26-megapixel sensor.

It’s a stills camera, and laid out conventionally, although there are two options for video mode. With “movie optimized control” switched on, most of the key controls are in a simple one-page menu rather than the dials. Under at least some circumstances the high speed modes seem to default to a 360-degree shutter angle, leading to over-motion-blurred pictures, which is worth keeping an eye on. The only other glitch is that there is no external battery charger – the only way to charge batteries is in the camera, and even though the X-T4 has improved endurance over its predecessor, in video mode it’s not going to do a full day. 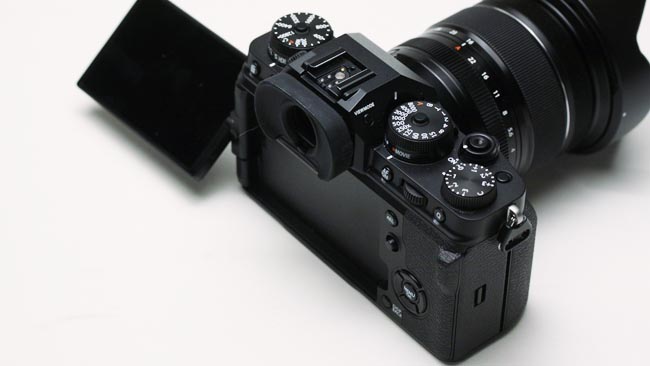 Happily the viewfinder is a good advertisement for the better variety of mirrorless cameras. Naturally the performance feels a little more sluggish in the lower-frame-rate world of video but it’s not bad, and the rolling shutter is, while present, in the less-objectionable range. Autofocus performance is best called midrange; it’s hard to beat Canon, but with the supplied 16-80mm short zoom it’s very usable. Most of the test footage was shot on the mechanical Sirui 50mm f/1.8 anamorphic, graciously lent out by UK dealer MTF Services; watch out for a review soon.

At a shade over £1500, the X-T4 is not at first glance the most affordable APS-C camera around. You can get a full-frame A7S II for less, or A7 III for only a little more, though they don’t have such good video features. For stills people, the improved autofocus and in-body stabilisation is attractive. For video people, the high frame rate and above-average handling of mixed HD/4K and log/look signalling is good. The 240-frame shooting stands out.

Cool heads will realise full frame is not a must-have and with that in mind, the X-T4 looks very good. It wouldn’t hurt if it were a little less expensive, but it’s hard not to finish by repeating the thought that it really does make really quite pretty pictures, and if it’s not about that, what is it about?