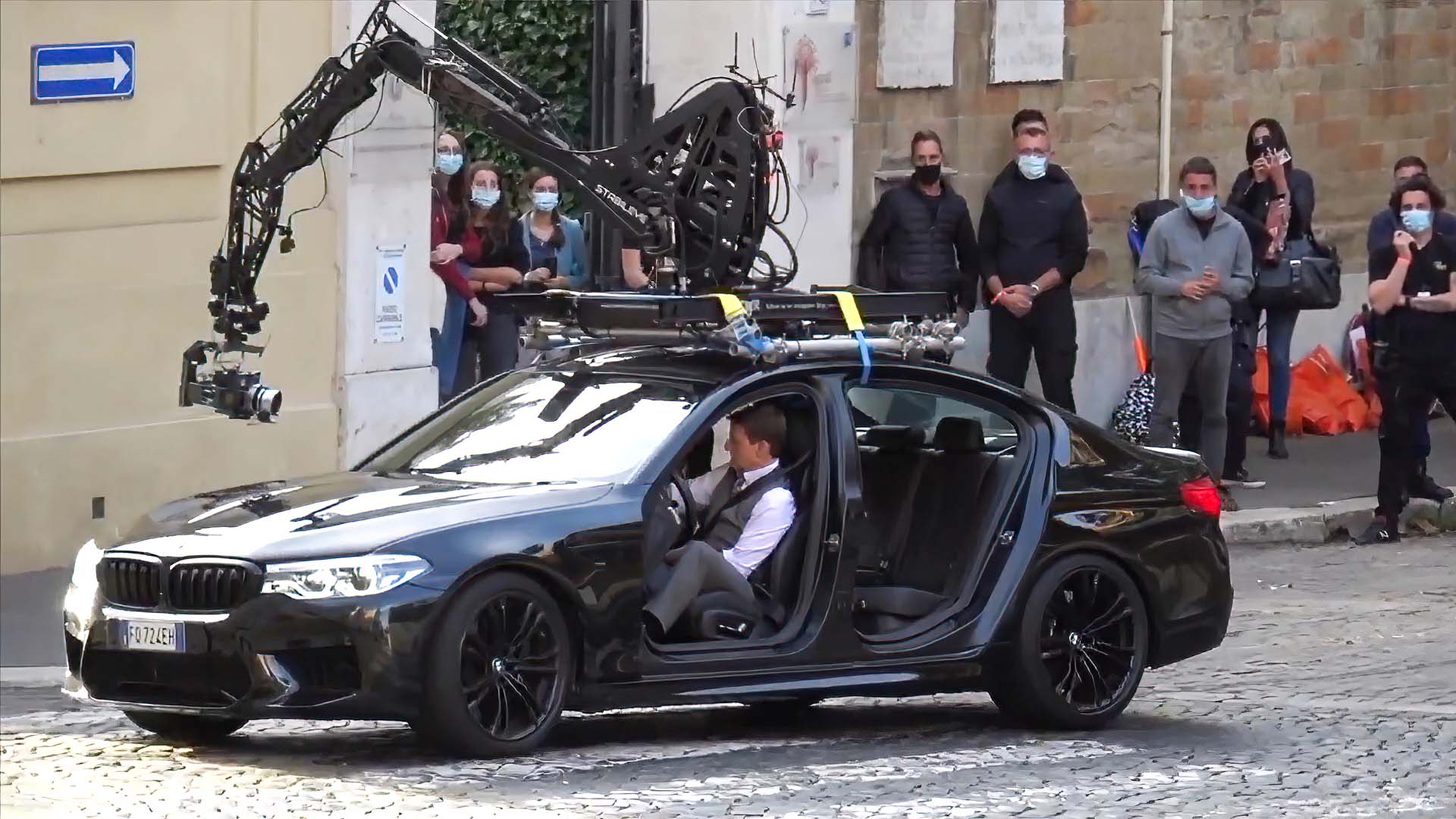 Mission: Impossible 7’s release may have been delayed to next September, but plenty of unofficial behind-the-scenes footage has already emerged. As we have come to expect from the franchise, there is a lot of vehicular action, from a BMW doing a donut drift in Rome’s Piazza Venezia, to a steam engine plunging off a cliff in Yorkshire.

The crew have employed numerous special camera rigs to capture all these daredevil stunts. Here’s a rundown of some of them.

A huge ramp was constructed in Oxfordshire for super-spy Ethan Hunt (Tom Cruise) to ride a motorbike off. A stunt rider tried it first only for his bike to catch fire on landing, though no-one was hurt.

Things went better when Cruise tried it himself a few days later. Harnessed to a safety cable, the star adopted an aerodynamic skydiving pose as the bike fell away below him. In an onlooker’s phone footage, two drones can be seen capturing the stunt, one tracking with Cruise and the other hovering in a fixed position beyond the end of the ramp.

Several YouTube videos show a car chase being filmed around the streets of Rome. Cruise is joined by co-star Hayley Atwell in a BMW M5 missing its doors, with several police cars, motorbikes and military vehicles involved too. Three cameras can be seen hard-rigged to the BMW using suction cups and Speed-Rail (scaffolding) along with an LED panel to bring up the light level inside the car.

Ethan Hunt apparently switches vehicles at some point in the chase, as a bright yellow 1970s Fiat 500 is also seen bristling with cameras with Cruise at the wheel. For some set-ups Cruise’s steering wheel is a dummy, with a stunt driver positioned elsewhere in the vehicle to control it.

In other parts of the same car chase, the BMW can be seen sporting a robotic arm on the roof which holds the camera out from the side of the vehicle, looking in towards Cruise. This is a Tyr Arm (named for the one-armed Norse God of War) fitted with a Stabileye head holding an Alexa Mini. The wirelessly operated arm has built-in suspension which gets a good workout as Cruise and his stunt driver skid around corners. 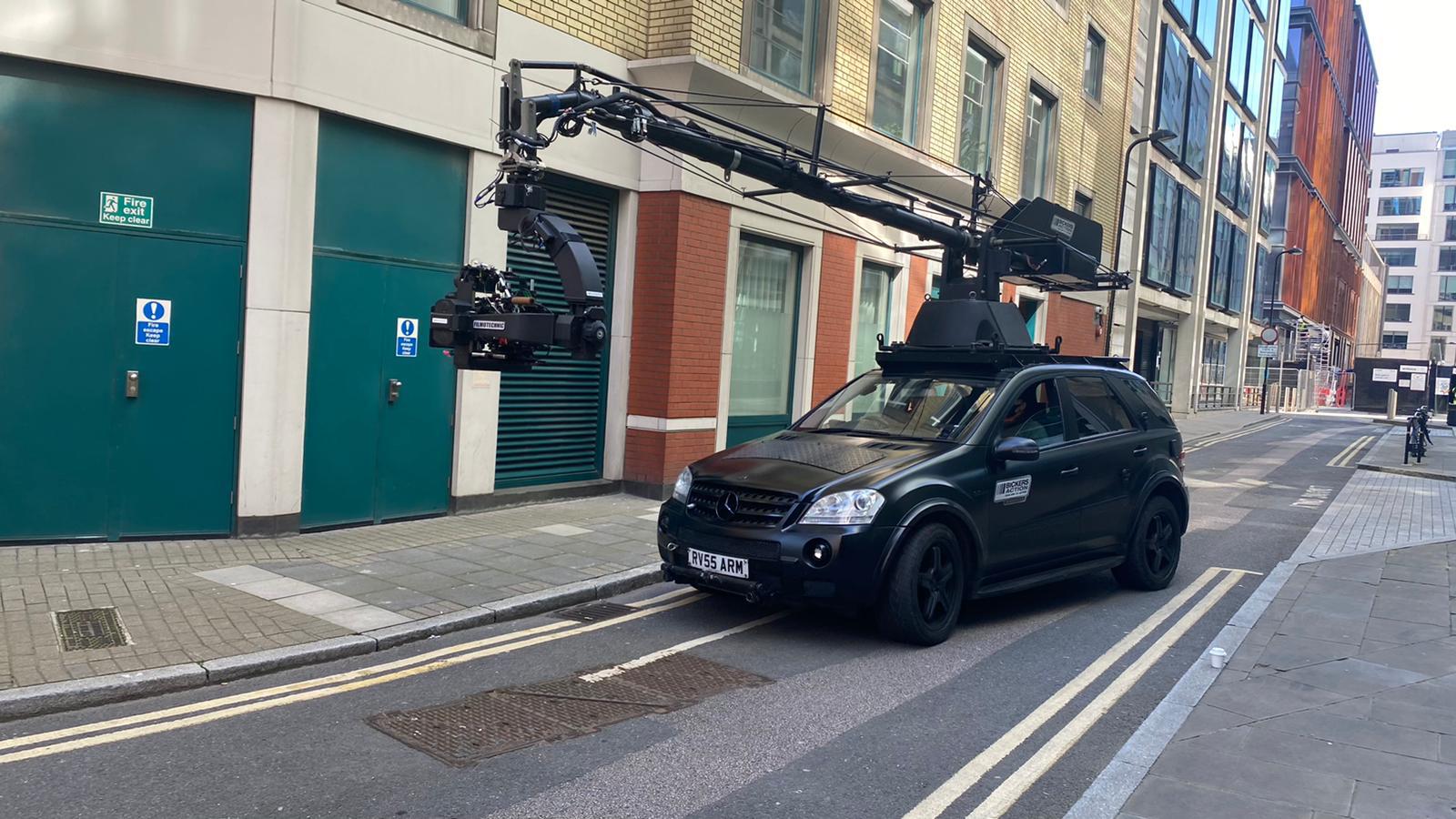 A Russian Arm mounted on a vehicle. Note that this is not from the set of M:I7. Image courtesy of Bickers Action.

More conventional than the Tyr Arm is the Russian Arm which can be seen tracking Cruise’s BMW in other shots. Typically mounted on the roof of a Mercedes ML55 chase car, as is the case in the M:I7 footage, the Russian Arm is a crane with a 4-6.5m arm and a gyro-stabilised head. Any dramatic shots you’ve seen in a movie which start close on a speeding car’s wheel or low to the road surface zipping by, then boom up to reveal more of the action, or which move around the outside of a vehicle in motion, were probably shot with a Russian Arm.

There was much controversy in Poland last year when Mission: Impossible 7 wanted to destroy a historic railway bridge as part of a full-scale train crash. Ultimately the production came to the UK for the stunt, building a short stretch of railway line in a Peak District quarry this summer. A mockup of a Britannia Class steam locomotive was driven to its doom off the end of an unfinished bridge; amateur footage of the stunt shows at least two crash cams rigged to the engine.

A helicopter can be seen tracking along with the train, but it’s unclear whether this was capturing an aerial angle or if it’s part of the story. 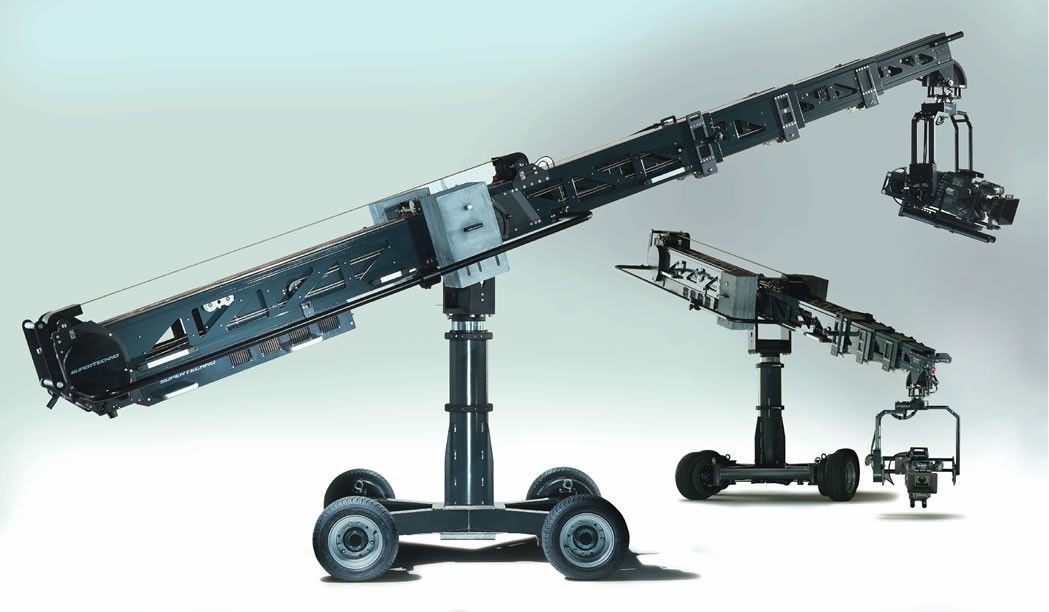 Other parts of the train sequence were reportedly filmed in Norway and on the North Yorkshire Moors Railway. One phone clip shows a diesel-hauled train with many crew members aboard several flatbed wagons, as well as what appears to be a partial mock-up of a carriage.

On one of the wagons can be seen a SuperTechnocrane 22’. These cranes are quite compact when retracted, small enough to fit through a set of double doors, but the arm can extend 16’ as well as booming up and down and slewing 360 degrees. The 22’ in the name comes from the maximum lens height than can be reached. Mounted to a moving train, some highly dynamic shots will have been possible with it.