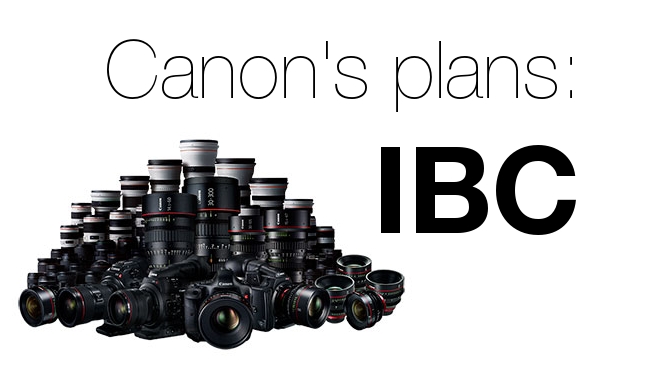 Canon gears up to rock Amsterdam with its largest IBC presence ever, promising 4K studio presentations and plenty of touch-and-see time with its products. But why the fuss?

Each September brings with it the buzz of product demos, prototypes models, and intriguing news from retailers big and small who compete for your attention and production equipment dollars/euros. That’s right; the International Broadcasting Convention, or IBC, is just around the corner, slated for September 12-17, 2013 in Amsterdam, to be precise. This year, Canon, a video Industry giant, has adopted a proven tactic to stand apart from the crowded field.

Sometimes, you can win by virtue of being the biggest kid on the block. Canon plans to test this theory by laying claim to 432 square meters of real estate its various stages and demo areas, the company’s largest ever footprint in its 30 year history of exhibiting at IBC. Of course, scale is only part of the story.

Without a clear emphasis, Canon’s IBC strategy could play like a well-worn product catalog. Ken Koyama, the Deputy Head of Canon Europe’s Professional Imaging Group, relays the company’s IBC focus: “Last year’s IBC was our chance to introduce Canon’s expansion into 4K to the European market. This year we’re focusing even more on fully demonstrating not only the capabilities of new 4K technology, but how the breadth of Canon’s overall range enables production of first class content at all levels.”

To convey the breadth of its video acquisition products, from HD to 4K, EOS to XA, Canon’s full lineup will be available to touch, hold, and try out with the complete range of TV and CINE lenses on hand. Although there will be the requisite product demonstrations and presentations, this one-on-one time with the gear and with Canon specialists is invaluable to both IBC attendees, and to Canon itself.

Canon’s IBC plan effectively leverages the strength it draws from its vocal community of loyal users. “We’ve been listening to a huge range of voices from the Industry,” says Koyama, “which have been telling us that content creators are looking for tools that allow them to really express their creative visions, so we have continued to add features to our products that enable them to be more expressive. We’ll be at IBC to demonstrate the full range of Canon’s products and help visitors to identify and take their next creative step through the latest innovations in broadcast technology.”

It remains to be seen if Canon has a few tricks in store, like a mysterious new camera prototype that has somehow flown under the radar. It would make sense, given the importance Canon has heaped onto IBC 2013. But surprises aside, why would Canon need to go big? Everyone already knows the Canon name and the company receives huge press regardless of the size of its presence at any particular trade show. While its IBC presense could be taken as a sign of insecurity in the face of a cluttered and uncertain market, I would argue the opposite. With the change to 4K, the film tech market is in a state of upheaval, with plenty of rivals and upstarts vying for the 4K crown. This isn’t a conciliatory gesture; it’s an example of Canon aiming at 4K leadership (and strutting its stuff in a way that only only an industry giant can).

Canon is offering a free IBC registration (regularly 60 Euros after August 21st) by visting http://www.ibc.org/register and using the Discount Code 4201 upon registry.

Here are some IBC bullet points from Canon to get you pumped before the show: