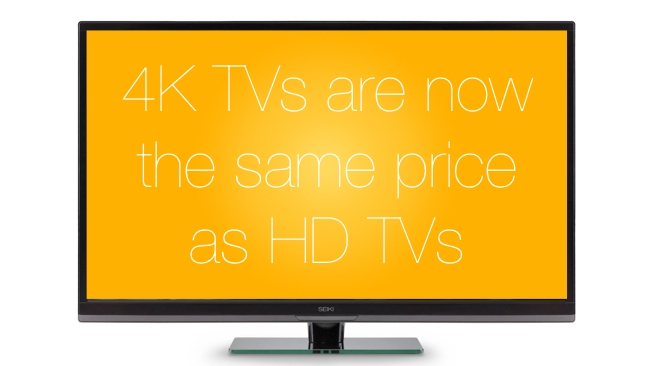 When people said 4K will never catch on, we disagreed. When they said that 4K televisions will be unaffordable for years, we begged to differ

And what better proof do you need that 4K is catching on than a perfectly decent 39" 4K TV (which is also a viable computer monitor) that's on Amazon for only $699? At this price, if you're in the market for a new TV, it's virtually an impulse buy.

Seiki was the first manufacturer to release an "affordable" 4K TV that wasn't just OK - it was really quite good. On their website they explain that they are one of the biggest TV manufacturers in the world, and it is the fact that they build in such huge quantities that means they are able to keep their prices down.

This is not to say that there aren't better TVs. There undoubtedly are, and the ones from Sony and its peers are looking at a "premium" buyers who don't mind paying for the ultimate TV experience.

But for those of us who just want some extra resolution and a bit of "future proofing", this would seem to be the sort of telly that makes a lot of sense. It may not come with all sorts of Smart features, but for $35 you can buy a Google ChromeCast. It's not 4K but neither is most of the available content yet. And there's nothing to stop a 4K TV being a good 1080p TV as well.

The point is that to see all this resolution, you're going to have to sit closer.

What many people fail to understand about 4K is that if you cram all that extra resolution into your existing screen, it probably won't make much difference, but if you move to a screen that's four times the size, it's just like HD, but over 4 times the area - and that's a good thing.

If you want to see 4K properly on a smaller screen, you just have to sit closer. It's that simple.

Finally, as one reviewer on the Amazon page for this Seiko tv commented - it makes a great TV monitor. See his full review on the next page.

(By an Amazon user)

Ok. I got this in the mail today and wasn't sure if it would work with my hp dv7 laptop with an intel hd3000 graphics card (HDMI only out). When I first opened and connected to this monitor the resolution defaulted to a maximum of 1920x1080 @ 24 Hz. It was pretty sharp but the last TV I had was just as sharp at that resolution.

So I spent all day working with different modelines to try to manually get the resolutin right. The monitor was impressive and would display all kinds of modes between 1920x1080 and 3840x2160. BUT. They were all kind of blurry and would not have worked to program all day on.

I cannot think of anything I have ever bought that deserved all 5 stars any more than this product. My monitor prayers have been answered.