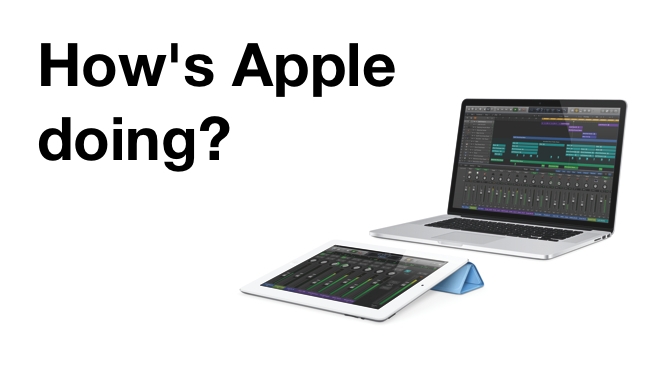 Apple makes quarterly statemements on its commercial progress during the year. There are often hints about future directions contained in these legally-necessary announcements. Keith Stewart reports

Since September 2012, Apple's share price has fallen about 40% from a high of $705.07. However, Tuesday's Q3 earnings report provided some respite from Wall Street's pummelling with a 4% rise in after-hours trading due to the company meeting the higher end of its own guidance and exceeding Wall St. expectations.

In the subsequent earnings call, CEO Tim Cook and CFO Peter Oppenheimer unsurprisingly refused to confirm any new products, but their answers certainly provided some insight into where the company is going, as well as what it actually achieved financially.

This was the principal pre-occupation of the analysts and, given supply chain leaks of plastic iPhone parts, seems all but confirmed. Apple is already in the (relatively) low-cost game with the iPhone 4 and 4S, of course, and Cook was keen to emphasise how interested Apple is in this market. The 4 is selling significantly better than the 3GS at a similar stage of life and Cook did nothing to dissuade analysts from believing a new iPhone specifically targeting this market is imminent. Perhaps the most surprising thing wasn't the cheaper iPhone, so much as it was Apple's repeatedly stressing how the 5 is by far the bestselling iPhone - perhaps too much so? The Wall Street Journal reported that Apple suppliers have been asked for larger screen iPhone prototypes to test, so while this year's 5S won't change the form factor - 2015 may.

Also of note, asked about the much rumoured iPhone trade-in program, Cook pointed out nothing had been announced but sounded positive about the win/win business model and environmental benefits. Obviously, if a cheaper iPhone is about to arrive, Apple would prefer to get as many of those sales itself rather than see reduced profits shared with other retailers.

Whether or not smart phone growth is about to level off - and Cook isn't convinced of this - there's certainly a hunger for the New 'New Thing' from Apple. iTV? iWatch? No confirmation from Cook, other than to insist more is coming; “We are laser-focused and working hard on some amazing new products that we will introduce in the fall and across 2014.”

Wearable computing is a popular topic, Google Glass keeps making headlines, of course, and Sony's NFC-enabled Smart Watch 2 ships September. The rumour mill churns with talk of Apple aggressively hiring engineers to develop its own iWatch and that name is being trademarked by Apple across the world.

iTV rumours have cooled somewhat recently - however Sony's Video Unlimited 4K service is also set to launch in the Autumn, so maybe a coincidence, maybe not. What's confirmed is that Apple's iTunes revenue rose 25% to a new record of $4.3 billion - this also covers Apps of course, but Oppenheimer took care to note over 1 billion TV episodes have been downloaded since launch and there's now 800,000 shows and 350,000 movies downloaded each day. More anecdotally, it seems like iTunes UK is (finally) getting more competitive on video content pricing and release dates occasionally ahead of Blu-ray, so the eco-system necessary to support something more ambitious than the current Apple TV is definitely strengthening.

For the analysts, the obsessive interest in a new product category is principally sparked by profits which, while still immense, aren't growing in the way they used to. For Q3, Apple posted quarterly revenue of $35.3 billion compared to $35 billion last year, or $7.47 per share which was at the high end of its expectations and beat Wall Street's expectation of $7.32 per share. While quarterly net profit fell to $6.9 billion compared to $8.8 billion, the overall picture was better than expected.

The main reason for the relatively good performance was the iPhone business. For all the talk of a weakening smartphone market, Apple set a new record for 3rd quarter sales - 31.2 million iPhones compared to 26 million in the same quarter last year. The mix of iPhones, of latest model versus older models is shifting but, if anything, the gross margin was ahead of Apple's expectations - although Oppenheimer indicated it will likely decline as new products arrive this Autumn.

The Mac business is down 7%, 3.8 million compared to 4 million last year, however the decline was far less than the 11% fall in the PC market generally and revenue was down only 1%. Also bear in mind, the new MacBook Airs only arrived in June, so their impact was limited, while the Mac Pro received a lengthy mention in the introduction with CFO Oppenheimer carefully listing all the key features such as support for 4k video.

iPad sales were also down, for the first time year on year, with just 14.6 million this quarter compared to 17 million last year, but Cook cautioned into reading too much into that due to inventory handling accounting for 80% of that difference and the fact the first retina iPad hit last quarter. More broadly, Cook defended against any notion of Apple's tablet dominance flagging by pointing to figures showing an astonishing 84.3% of US/Canada tablet web usage is iOS. The mix of iPad vs iPad mini sales wasn't made clear, but iPad revenue in total fell 27% and that's likely in part due to the iPad mini's (somewhat) lower cost and the lower margins on a no-compromise (no plastic) design.

Overall, then a solid quarter which sets the scene for a very interesting Autumn. Aside from the Mac Pro, we can regard an iPhone 5S and cheaper, plastic iPhone 5-type model as inevitable around September. An iPad refresh is expected with a thinner bezel to mimic the iPad mini, which itself may not be updated until 2014 depending on how Apple engineers resolve getting a retina display (and good battery life) into such a small chassis. A refresh of the retina Macbook Pros is looming and let's not forget iOS7 and Mac OS Mavericks. Apple will have to deliver on talk of a new category product soon, but including it within the 'busy' Autumn period may be a bit optimistic.