Creative Cloud: Was Adobe right to move to subscription? 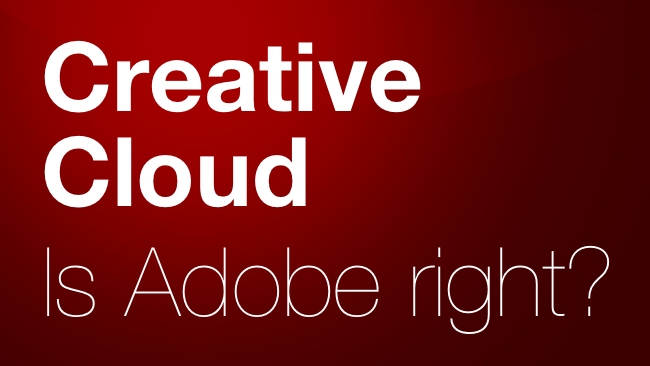 What’s the value of software?

I’m writing this with some software called Byword. It’s designed for professional writers and it’s probably the simplest idea ever for software. It gives you a completely blank screen, a choice of white or black backgrounds, and if you run it full-screen it gets rid of all the “noise” that can distract you or cause you to lose a train of thought.

Best of all, it highlights the paragraph you’re working on and dims the rest, so your eyes always know where to go and you focus on the area you’re working on. It really does make me more productive.

So, what’s it worth? It costs so little in the Mac store that it’s an impulse buy. But if you took it away from me - what would I pay to get it back?

Actually it’s not hard to work out. This software makes me around 25% more productive. It’s that simple. I would probably pay around $500 for it if I had to.

It's not just the number of features

Now, notice that this is nothing to do with the number of features in the application. There are just a few core things that I absolutely must have. Without them, I have vital tools missing from my kit.

So if I have relatively simple demands as a software user, what about content creators? They have needs that are almost exponentially more complex, especially with the modern trend where one person takes the pictures, post produces them and then puts them onto YouTube or a corporate client’s site.

The reason I’m talking about this in the first place is because of the furore over Adobe’s Creative Cloud subscriptions. I’m not taking sides on this. I can see valid arguments on both sides,  Here’s how I see it.

Unless it’s truly open source, then the organisations that develop software are businesses. They own the rights to their products (except for any code that they’ve licensed from other parties) and can, by and large, charge what they like for them.  They’re under no legal or moral obligation to maintain previous pricing and there is nothing to stop them changing their charging method completely. It is for them to set the prices, and for the customers to decide whether they want to buy from the developer any more.

While the above is simply a fact, no manufacturer in its right mind would completely disregard the needs and wishes of its customer base, especially when there are alternatives that they might go to.

Do software vendors really have no moral oblication? It depends on your stance on this, but at least in one sense they possibly do. If, without warning, and without giving a credible means to preserve their customer's work, a company switched off the means by which customers could access their creations, then that would, in my book, be reprehensible.

So, strictly, apart from this narrow moral sense, customers are not entitled to any sort of continuity with the way they pay for the right to access their software.

My view is that if customers want to complain about prices they should do so not  from any sort of percieved entitlement but from the angle of commercial viability. The threat to vote with your feet is a real and powerful one.

I think my reaction to the Adobe Creative Cloud announcement might have been different to most. I thought it sounded quite expensive but nevertheless reasonable value - for professionals. I have very specific reasons for believing this.

As an online publication editor, I spend a lot of time cropping pictures. If I didn’t have a cropping tool I don’t know what I’d do. I would be willing to pay quite a lot of money for one. As it happens, I don’t have to because virtually all photo editing software has such a facility. And there’s no good or bad when you’re cropping: a crop is a crop.

But what about other tools? Sometimes to get to the 16:9 aspect ratio we use for our headline pictures in RedShark I have to stretch images, and the best way to do this that I’ve found is to use Photoshop’s Content Aware Stretch. It doesn’t always work because of the material, but when it does, it’s almost miraculous. I’m going to find the new Motion Blur removal tool pretty handy too. I would pay quite a lot of money to buy these tools if they didn’t come bundled in Photoshop.

For other people doing other things, there are other tools that are just as essential. If you add up the sum of the parts, it comes to very much more than the total price for these tools and dozens of others which all come in the package.

I know there are plenty of arguments around fixed pricing versus subscription, and about what happens to your content when you stop your subscription and no longer have access to the software. I’m not talking about that here. What I’m talking about is the value of the software as opposed to its price.

I personally like the idea of software as a service. I like getting constant updates and new features and fixes before having to wait for a major new release. There is enough value in this idea for me that I don't mind paying more for the software if it's available like this. I don’t like paying a lot for software that simply gets old and I don’t like paying a large sum when the time does come to upgrade. Some people pay more for their satellite TV channels than it would cost to have the full Adobe Creative Cloud suite. In fact, some people pay more for their decaff lattes every month.

So, it is a matter of choice. I seem to be in a minority here, and I’m not saying anyone’s right or wrong. It is a matter of opinion and what does or doesn’t suit you. Time will tell whether Adobe has made a good strategic move here, but I do think we’re seeing a trend toward subscriptions. What is yet to be established is what constitutes value for money in the eyes of the users.