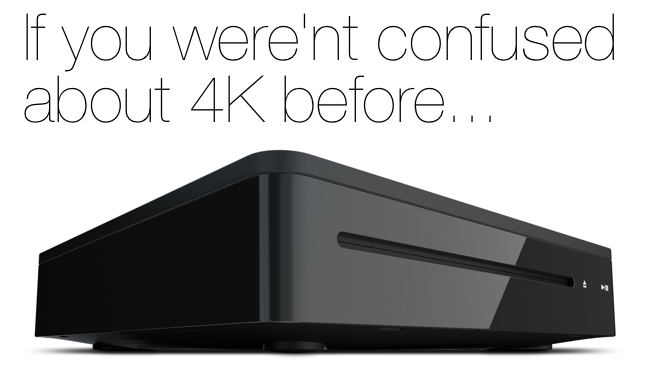 If you were'nt confuced about Blu Ray before

The whole thing around mastering Blu Rays from 4K source material and then upscaling from the HD disk to 4K on the television has reached a new peak of obfuscation, confusion and - honestly - absurdity, with a press release from Toshiba about their 4K upscaling Blu Ray player that throws an opaque layer of mud over what exactly it does. We're not blaming Toshiba for this - it was probably just someone in Marketing who wanted to push the 4K vibe but this type of thing really doesn't help to promote 4K adoption at all.

Anyone reading this is going to be really, really confused. Have a look:

"Toshiba's Digital Products Division (DPD), a division of Toshiba America Information Systems, Inc., today announced it is the first Blu-ray player manufacturer to be awarded 4K Image Certification by Technicolor, a worldwide technology leader in the media and entertainment sector. Technicolor is leveraging its expertise in Hollywood color and imaging science to certify that Toshiba's BDX6400 Symbio® Media Box and Blu-ray Disc™ Player will deliver improved viewing experiences for consumers at home."

To my excitable mind that read like Toshiba was announcing a 4K Blu Ray player. But of course, they're not, because there's no such thing: if it's Blu Ray then it's HD - by definition.

The next paragraph hardly helps, although it does perhaps start to hint that this isn't really a 4K player:

"Today, native 4K content is used for production of Hollywood movies, but it is ultimately reduced in resolution for the home to fit accordingly with existing HD disc formats and display panels. While the industry transitions to native 4K content, it is important that consumers are able to enjoy the high-resolution display of UltraHD 4K TVs with their current HD content."

And then , just when you were starting to think that the whole thing might be getting reasonable, you get this:

"It is an honor to have our 4K media player officially certified by Technicolor," said Scott Ramirez, vice president of product marketing and development, Toshiba America Information Systems, Digital Products Division. "Passing Technicolor's thorough certification process is a testament to Toshiba's goal to create the highest quality consumer electronics that are ahead of the curve. Technicolor's 4K Image Certification will be a key differentiator in the market to help consumers discern and identify the best 4K media players."

It's only when you get to the penultimate paragraph that the mist starts to clear, although most people will already be too confused for it to make any difference:

"With Technicolor 4K Image Certified products, consumers can be confident of a 4K source device's ability to deliver a stunning 4K Hollywood movie experience in the home from existing HD content. Technicolor has certified Toshiba's 4K image processing technology that up-scales "less than 4K" content to near 4K quality without inserting image-damaging artifacts."

Well, it took a lot of confusion and multiple re-reads to get there.

I like Toshiba. They're a great company with very nice products, but I just wish that - intentionally or not - they hadn't made us think that they sell 4K Blu Ray players. What they actually do is make HD upscaling Blu Ray Players, because that's all anyone can do until there's a new type of Blu Ray.

This was a good opportunity for clarity instead of doubt. They could have said something like

"Right now, there's no such thing as a 4K Blu Ray disk, so what we've done is take the pristine HD content from your player and upconverted it to 4K the best way we know how. And the result is so good that we've been given an award by Technicolor".

Now that might make me want to buy a Toshiba Blu Ray.