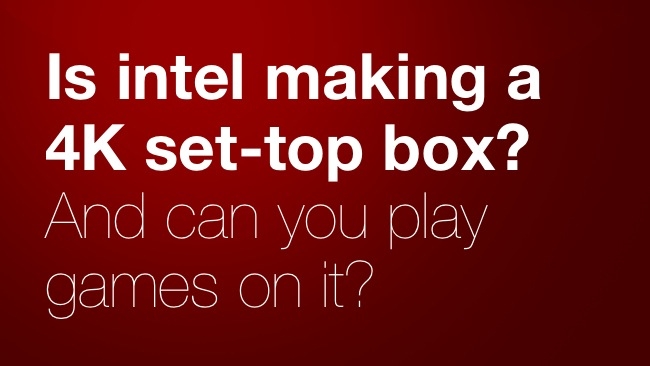 Is Intel making a 4K STB

Wired has just published an article about Intel's set top box and speculates whether it might be capable of 4K.

Well, it's actually more than speculation. It seems likely to us that at least one version of the STB (and perhaps there will only be one version) will sport a 4K capability.

Intel's new Haswell processors are not only faster, not only capable of 4K output, but have much more powerful graphics as well. In a step-change from the previously rather limp on-board GPU performance we've come to expect from Intel's chipsets, the Haswell generation promises graphics capabilities at least on a par with a mid-range dedicated graphics card.

Powerful graphics in a set top box? What could that possibly mean? Games, perhaps? While it's too early to speculate that games developers might take to this new Intel box, that hardly matters initially because games engines like Unity run on virtually anything these days and that includes, of course, a browser.

And, as Wired points out, Sony's $699 4K media player only works with Sony TVs (why, we don't know yet - could it be a proprietary connector?), so it absolutely makes sense for Intel's offering to facilitate 4K playout.

There's still no final word on what sort of infrastructure and ecosystem that Intel is proposing around its STB, but there have been rumours of a pay TV system where you can create your own bundles; in other words, you only have to chose the channels you want to watch.

But even this, if it's true, and we don't know that yet, seems slightly quaint and old fashioned with the recent announcement, for example, from YouTube that they are setting up their own paid-for channels, and the general drift away from linear TV programming towards a la carte non linear viewing.

Whichever way you look at it, though, all the ducks are lined up for 4K non-linear content delivery in the very near future, and games on everything with a web browser and decent graphics.