Blackmagic: the advantage of having a strategy 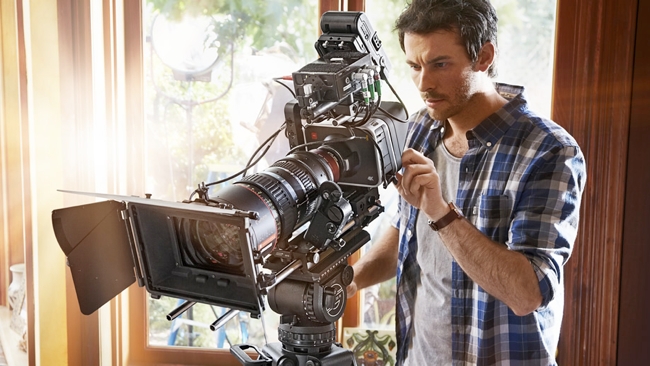 This morning, I woke up in my Las Vegas hotel room unspeakably early thanks to persistent jet lag. In my email was a note from RedShark contributor Freya Black saying "Here's the article on the two new Blackmagic cameras"

This was surprising as Blackmagic are noted for their secrecy, and last year, absolutely no-one guessed that they were about to launch a camera. I wasn't expecting to see anything before today's Blackmagic press conference.

I had thought that there might be a new camera - possibly a 4K one, but this was by no means even likely, given that the original Blackmagic camera has only recently begun shipping in quantity. But two cameras?

Anyway, although I was tempted to publish Freya's original article, which was based on the (correct) rumours bouncing around the web, I wanted to check the facts, so I asked her to wait until after the Blackmagic press conference.

Being first is less important to RedShark than being right.

So, I went to the press conference, and, sure enough, the cameras were announced. You can read about them here, and I've reproduced the press release in full below.

We'll be writing a lot more about the new cameras and will be testing them as soon as possible. But I just wanted to mention a few things that stuck me during the press conference.

Out of the blue

First, a technical point. Seemingly out of the blue, all of a sudden, Blackmagic has a complete 4K production system. End to end.

The new 4K "Production camera" has a special kind of SDI output. It's called 6G SDI, where the "6" is approximately the number of gigabits of information it can carry. 6G is not a ratified standard yet but is certainly on its way, so I would hope that it's not going to be a "standard" that is proprietary to Blackmagic.

Also sporting a 6K SDI interface is the Blackmagic ATEM Production Studio 4K. It has multiple inputs for SD, HD and 4K, and all the transitions and effects you'd expect from a powerful switcher. And it costs $1,995. That's about what a couple of days training on a more expensive switcher costs.

So now you can make live productions and display the output on giant screens for conferences, events, etc, or you can record them to the Hyperdeck Studio Pro, which also sports 6K

All part of a plan

When Blackmagic bought Davinci almost 4 years ago, everyone wondered what an I/O company was going to do with a colour correction application. But it was all part of a plan - and is now a critical part of the raw workflow for all three of Blackmagic's cameras.

Almost as if it had emerged suddenly out of a bank of fog, Blackmagic has transformed into a company that has an end-to-end 4K production solution; so cheap that it almost defies belief.

Hindsight is an astonishingly useful tool, and you can see now exactly what Blackmagic' strategy has been. It's been to built this ecosystem - not only for 4K but for handling raw files from the cameras. The value of each individual component would have been massively diminished without the presence of the others.

Foresight is a much better tool though, and Blackmagic clearly has it in abundance.

Read about the 4K and Pocket Cinema Cameras here

New compact Super 16 digital cinema camera with 13 stops of dynamic range, allows shooting with a professional film look in a beautiful design that fits in your pocket!

Blackmagic Pocket Cinema Camera will be demonstrated on the Blackmagic Design NAB 2013 booth at #SL218.

Since the original Blackmagic Cinema Camera was launched at NAB 2012, it has been celebrated by industry professionals for its amazing film look and accurate and cinematic color. The new Blackmagic Pocket Cinema Camera has most of the features of its bigger brother, including its feature film look, but has been redesigned with a dramatically smaller size that is less than an inch thick and can be held easily in your hand.

The Blackmagic Pocket Cinema Camera features an industry standard Super 16 sensor size, so it’s perfect when using Super 16 cine lenses via MFT adapters, as the shooting experience is the same as using the same lens on a Super 16 film camera. The 13 stops of dynamic range look of the Blackmagic Pocket Cinema Camera is almost identical to shooting on a professional Super 16 film camera. The Micro Four Thirds lenses offer a wide range of low cost lenses with amazing image quality, and they are compatible with mount adapters such as PL mounts for large lens and professional motion picture film rigs.

One of the most important features of the Blackmagic Pocket Cinema Camera is its super wide dynamic range of 13 stops, allowing feature film quality images. A common mistake in the television industry is the assumption that more resolution means higher quality. Most cameras, even ones with higher than HD resolution, can produce"video" looking images that suffer from highlight and black clipping that limits details. Blackmagic Pocket Cinema Camera's wide dynamic range eliminates this problem and provides film quality with dramatically more detail retained in black and whites in the image. Once the shoot is complete, DaVinci Resolve Lite color correction software can be used to adjust images and take advantage of this extra range in the images.

To eliminate the damage that low bit depth and high compression video storage creates, the Blackmagic Pocket Cinema Camera includes a easy to use SD card recorder that allows the full sensor dynamic range to be recorded in professional ProRes 422 (HQ) format, as well as 12 bit Log RAW lossless compressed CinemaDNG format. These files can be read by high end video software as they are all open standard. In addition to the regular CinemaDNG RAW format, Blackmagic Design will also be implementing a QuickTime wrapper for the open standard CinemaDNG and companion codec, allowing the camera to record in a format that allows RAW editing in popular editing software.

Blackmagic Pocket Cinema Camera has been designed as the perfect companion to editing software such as Final Cut Pro X and Avid Media Composer. Unlike other cameras, which require the use of custom video file formats, the Blackmagic Pocket Cinema Camera includes absolutely no custom video file formats, and every file type included is open standard.

"This is an extremely exciting camera and its been amazing to work on. Our original Blackmagic Cinema Camera was small, but this new model is so much smaller than the original, we almost cannot believe it features very similar image quality," said Grant Petty, CEO, Blackmagic Design. "We think customers are going to really enjoy this new model and use it both personally and professionally. It’s going to allow shooting in situations that could never have been achieved at this quality level previously. It’s also going to be the camera that thousands of new up and coming cinematographers use as their first camera for their independent films. It’s going to be exciting!"

Blackmagic Pocket Cinema Camera is available in July for US$995 from Blackmagic Design resellers worldwide.

Product photos of the Blackmagic Pocket Cinema Camera, and all other Blackmagic Design products, are available at www.blackmagicdesign.com/press/images.