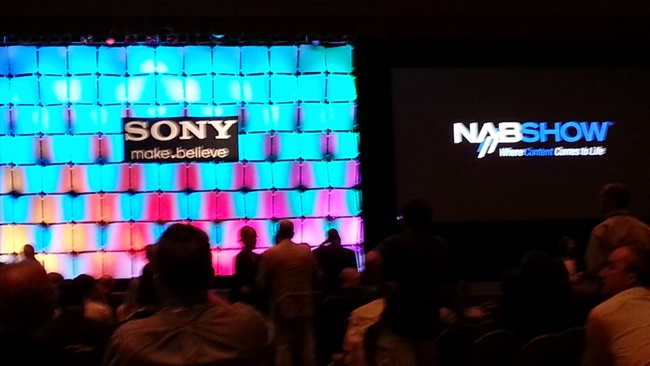 4K is the future of home viewing

Sony was in a difficult position when they presented their press conference today at the Mirage Ballroom in Las Vegas. They've already announced their F5 and F55 4K cameras in October last year (they've already sold 2000 of them) , and no-one was really expecting any ground-breaking news from them today. But that doesn't mean that the content of the news conference wasn't important, because the underlying seismic movement towards 4K was solidified by a few of the more subtle comments

You can sum up the overall theme of this press event in a single, admittedly rather repetitive sentence:

You can see that Sony is, subtly, saying that, at least in some sense, 4K might be important to them.

The whole tone of the presentation was that Sony has claimed 4K as their own. They have the definitive 4K ecosystem, and have credible evidence to back this up.

Alec Shapiro, Senior Vice President, Sales and Marketing, Broadcast and Production Systems Devision was first up and dived straight in with

4K is the future of home viewing

4K isn't everything (nor indeed is 8K for that matter)

Just so we don't get too transfixed with 4K, he went on to stress that the real focus for Sony is a concept called "Beyond Definition', which is to say that all content, whether it's HD or beyond 8K, any time, any place is what Sony is now all about.

We were treated to a preview of Oblivion, filmed with Sony's F65 camera. DOP Claudio Miranda came onstage to talk about making the film with this device:

We loved the way it looked. Very clean. You could tell by looking at the scenes that the camera could do things you couldn't do with other gear. There's a big shot where it was 95% lit by a flashlight.

With explosions, we captured the highlights because of the dynamic range

Iceland was one of the main locations were we shot. It's covered in volcanic black sand. It was really something to be able to capture all the gradations in the black sand, and all the little colours that the extra colour gamut in the F65 was able to cope with. These were difficult shots in terms of dynamic range.

DIT on Oblivion, Alex Carr, was asked about F65 workflow:

Working with 8K raw, you don’t need any special equipment to work with the camera files - just an average CPU. We shot up to six or nine terabytes per day. Every kilobit was worth it. Data size is nothing to be afraid of.

Outside of film, 4K is gaining a foothold in TV and Sports production. in the UK, Sony is building a 4K truck for Telegenic, and they're understandably pleased with their 8K stitching system that takes two 4K cameras aimed side-by-side at a football pitch, and allows directors to zoom into even a small area of the pitch and still output at HD. The system takes care of the geometry and produces a smooth-looking full HD output. This is perfect if the conventional cameras missed a piece of action. It's like - well, it is - being able to retrospectively direct the cameras.

Anyone who buys a 4K TV can purchase a $699 media player that comes bundled with 10 4K films. This - still unnamed - device can be later modified for downloading films as well. Details about this device are emerging slowly, but at least we now know the price.

Still talking about consumer electronics, Sony revealed that there will be a format called XAVX S for consumer 4K cameras, of which there was no specific mention.

Other products announced include two new 4K OLED monitors (still in prototype form), and the Anycast Touch - a successor to the original Anycast system that is essentially a live production and streaming studio in a portable box, but with a modern touch interface.

Finally, Sony has started a "company within a company" to create and promote media cloud services. Few specifics were given but this side of things does appear to being taken very seriously. Here's what their press release had to say:

"With the Cloud, the sky is the limit" said Sony.