Samsung bucks the predicted pricing trend with their $39,999 4K TV 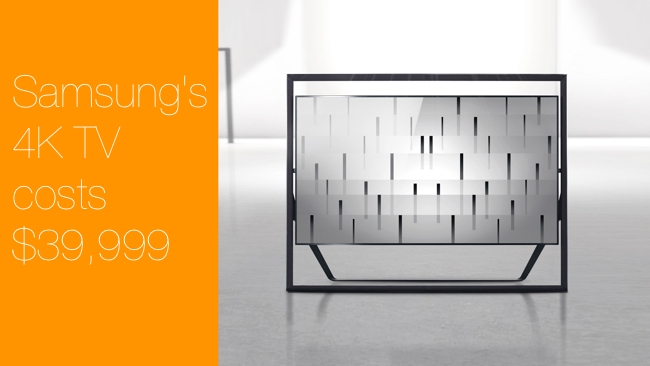 With a price that makes Sony's 84" 4K Bravia look like an absolute bargain, the memorably-named UN85S9 from Samsung is as much modern art as it is a 4K TV.  We're not sure why it costs as much as a mid-range Audi, but the specs, including localised LED lighting, look pretty good. Even if not many people buy it to use in their living rooms, we're pretty sure it will be popular as an electronic "roadworks" sign

Here's Samsung's own description, which doesn't do much to justify the price, not least because it makes it sound like there's one of Samsung's own mobile phone chips inside:

With brilliant picture quality in ultra high definition resolution, the breathtaking S9 is the future of home entertainment viewing. It also provides 2.2 channels of powerful 120 watt sound to complement the UHD picture and a quad-core processor for true multitasking between content and apps.

Joking aside, we'd imagine that the picture from this set is pretty amazing as Samsung has proved in recent years that they really know what they're doing with televisions.