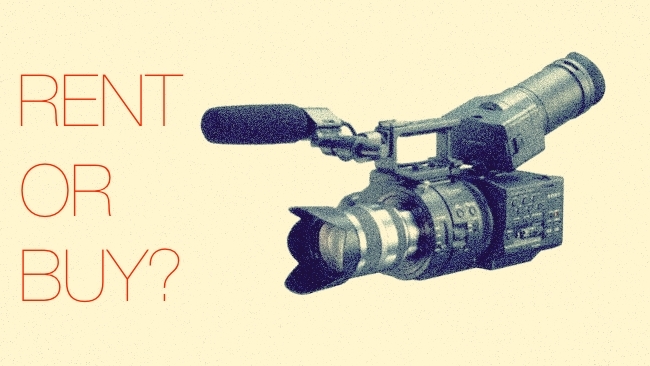 Rent or buy? Phil Rhodes finds that renting might not be the most expensive option

Recently, I've had more than a few conversations with filmmakers – perhaps more often from fairly new filmmakers – about the affordability of camera equipment.

On the face of it, this is absolute horsefeathers. The price-performance ratio of camera equipment has never been better, and the availability of grading equipment capable of recovering greatness from the direst inadequacies of lighting and production design is unprecedented. On the other hand, much as the quality of equipment has risen just as its cost has fallen, the ubiquitousness of HD and the increasing sophistication of the audience means that a prosumer cameras you can reasonably call “decent” will still cost several months' wages to buy, depending on your definition of “decent”. And your definition of “wages”.

So, it's obvious that not everyone is in a position to constantly own the best and latest camera equipment, especially not at the moment when the latest thing becomes the old thing in, probably, less than a year, and the pay-back period on new gear must therefore be considered in mere months. How can anyone possibly afford to own this stuff? Well, easy. They can if they're a rental facility.

Yes, it seems expensive to end up paying, say, ten percent of a camera's value for a couple of weeks' hire, and finish up with nothing but footage to show for it. Delivery costs can stack up if you're even slightly outside a major production city, and especially if you're doing lots of individual days here and there. Adding things to production insurance – which you did have anyway, right? - can be a hassle, and buying insurance from the rental house (an option which they increasingly offer) can be an expensive convenience.

On a technical level, it can be difficult to ever really get to know a camera without a level of access to it that can be difficult to achieve if you don't either own it or do very big shows that allow you prep time. Because you'll almost never get absolutely everything from one place, you also need to make sure the rented equipment is compatible with all of the other bits and pieces you'll have around it, such as lenses, lighting and grip equipment that you may own, or be renting in from elsewhere. The lack of relatively trivial interfacing equipment – typically cables or mounting adaptors, clamps, brackets and other minor bits of hardware which are inexpensive but often a special-order item outside major markets – can be a serious problem.

You get the accessories

Of course, accessories can also be an upside, at least within the rental kit itself. I recently rented a Sony FS-700 camera, which was supplied with no less than five (yes, five) NP-F970 batteries. Genuine Sony F970 batteries are well into the three-digit range in most currencies, making a pack of five, and two chargers, a very significant additional value. Almost all FS-700s, which have the relatively obscure Sony E lens mount by default, seem to come with the Metabones EF adaptor, which is another few hundred notes' worth.

But the major advantage of renting is your complete immunity to depreciation and obsolescence, at least beyond the fact that you're paying for a notional amount of the equipment's depreciation as part of the rental fee. This is after all the economic purpose of rental; to spread the cost of ownership. Naturally, there will always be pieces of very capable equipment at the cutting edge of technology which are so incredibly expensive that they'll always be hired, and likewise there are things (like a lot of cheaper DSLRs) – that make more sense to own in most cases. It's a straightforward economic decision at some point, the details of which will vary depending on the production. Either way, whether rental is a way to access unaffordable gear, a way to avoid depreciation on infrequently-used cameras, or simply a way to try before you buy, I find that smaller, independent shoots tend to be a lot less ready to rent than perhaps they should.