Frame.io raises another $20m - will build Machine Learning into software 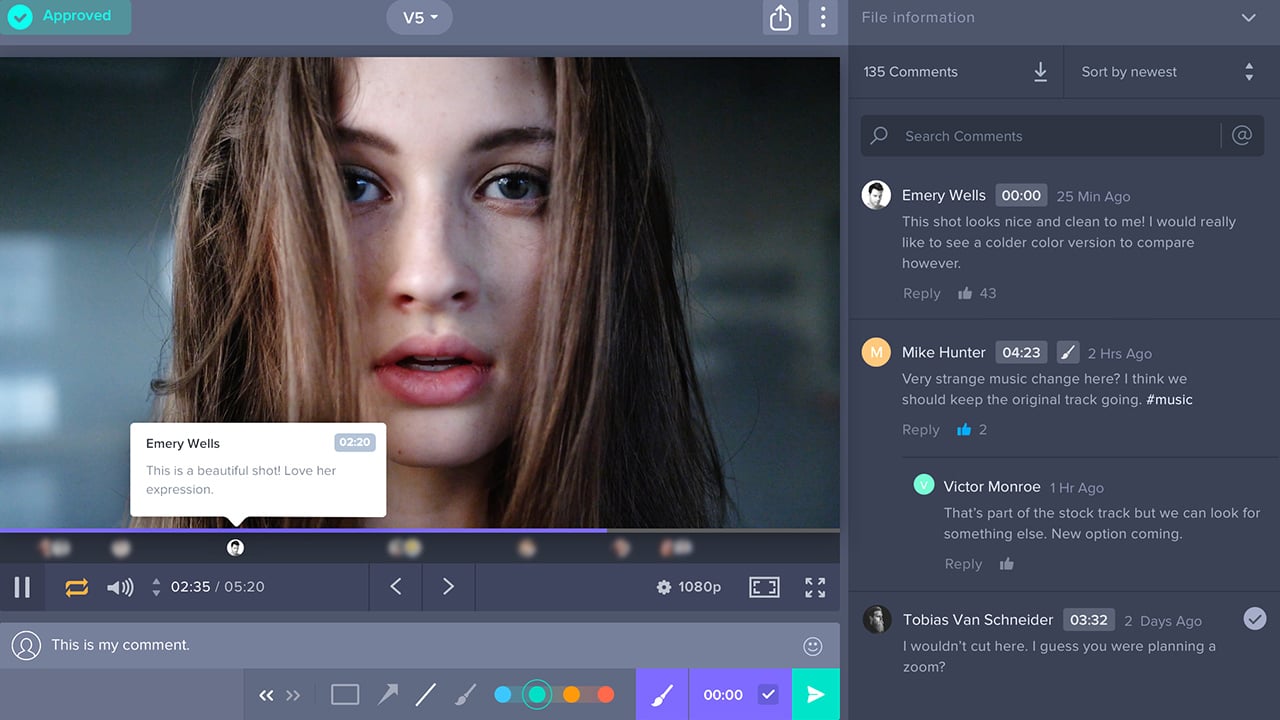 New funding will allow Frame.io to considerably expand its capabilities

New York-based Video Review and Collaboration company will spend the funds on incorporating new technology including AI into future products. By Nicole Caetano.

What do you do if you need to point out a issue in the top right-hand corner of the 4875th frame of a video?

You either send a long email including timecode and possibly a frame grab from an NLE and an arrow you’ve inserted in Photoshop - or you can use a service like Frame.io, that lets you review the video frame-by-frame, allowing you to draw on the images if necessary.

In essence, Frame.io takes everything that’s bad about email for video review, and makes it good.

Building on its momentum over the past year, the NYC-based company has just raised another $20m in Series B funding, led by FirstMark Capital, and bringing their total funding to $32M.

Frame.io intends to use the money to double-down on cloud services and infrastructure, as well as new technologies like Machine Learning.

AI and Machine Learning are suddenly at the top of many media management companies priorities as the ability to search using image matching and voice recognition is becoming a reality.

You can read the full press release on the next page.

Frame.io Announces Series B Growth Round of Funding Led by FirstMark Capital
Frame.io reimagines postproduction and the business of creating video with $20 million in Series B financing. FirstMark Capital led the round with support from return investors Accel Partners, SignalFire, and Shasta Ventures.

New York City, NY – Frame.io, developers of the video review and collaboration platform for content creators, has raised $20 million in Series B growth funding led by FirstMark Capital. The latest round of funding was also supported by return backers Accel Partners, SignalFire and Shasta Ventures. This latest infusion of capital brings Frame.io’s total funding to date to $32 million, which the startup will use to develop in key areas including the core video review and collaboration product, cloud and content security, and the Frame.io developer ecosystem. Founded in 2014, Frame.io is also backed by Hollywood heavyweights Jared Leto and Kevin Spacey.

“We’re excited to continue to work with our existing partners at FirstMark Capital, Accel Partners, SignalFire and Shasta Ventures,” states Emery Wells, co-founder and CEO of Frame.io. “The round is an exciting milestone for our team, and more importantly our community, and will help us in elevating our mission from reimagining video collaboration to reimagining post production itself.”

“In today's digital ecosystem, video is becoming an integral part of nearly every company's media and content strategy,” said Amish Jani, a founder and Managing Director of FirstMark Capital. “Frame.io is transforming the way companies approach the business of creating video. This latest investment will help Frame.io scale and continue developing a world class product for a creative community that has traditionally been underserved by technology.”

Frame.io makes the process of sharing and collaborating on video projects incredibly simple, through an intuitive user interface where users can upload and organize projects, then share internally or with clients to review and add feedback. Used by leading media and entertainment companies including TechCrunch, BBC, Vice, The Onion, Facebook and many more, Frame.io has helped countless organizations in the transition to video, as more and more companies implement video into their branding strategies.

With the Series B funding, Frame.io will be making a sizable investment in iterating the core product, with a significant focus on cloud and content security. Trusted by some of the world’s largest media corporations, security is top of mind for leaders in the industry; as such, security has become a core pillar of the Frame.io product offering, and will continue to expand with features such as watermarking and a host of new security/compliance certifications including MPAA. This investment in security will also extend to the inclusion of artificial intelligence and machine learning into the core and enterprise product roadmap.

“Artificial Intelligence is going to play a huge role in Frame.io's future,” states Matthew Ruttley, Head of Data at Frame.io, who spearheads the company’s Data Science initiatives. “Enterprise customers will benefit from a whole host of powerful, proprietary Machine Learning systems. These apply to everything from streamlining video review workflows, to robust, all-important security features.”

Read Emery Wells’ blog for more details on how Frame.io will use its latest round of funding to continue to build a hyper-secure, cloud-based platform that centralizes all tools and services needed for the creation of world-class video. Join the growing community of video creatives who are collaborating every day by signing up at Frame.io.

2017 has been a year of milestones for the New York City-based Frame.io, with the release of Frame.io 2 followed by the official launch of Frame.io Enterprise – the company’s enterprise-grade product designed to help the largest media clients, including Turner Broadcasting Systems and Buzzfeed, collaborate at scale. With over 370,000 users (and increasing every day) in over 170 countries, Frame.io will be using this investment to double down on strategic product innovation, offering content creators a platform that connects the many different creative tools, publishing tools, stock services, asset management and storage systems, and many other specialty products involved in the business of creating video.

The new funding will also help Frame.io expand its rapidly growing team, which has doubled in the past year, across the board. For more information on open roles, please visit the Frame.io careers page.