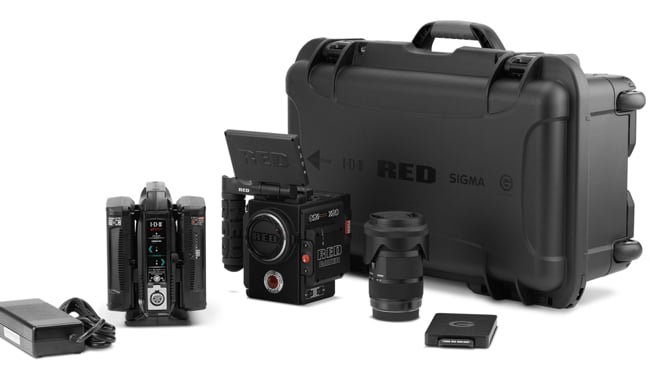 Apple, it seems, is going to start selling RED cameras. Specifically, the RED RAVEN in the form of a comprehensive kit

We've just recieved news is that Apple is going to be selling RED cameras. Not all of them, and not even just one of them, but, as we interpret it, the RED RAVEN 4.5K camera with a specific, pretty comprehensive kit of parts. Here's the list of what's in the kit:

You can see the full press release below but meanwhile, we think this is a great idea and a big achievement for RED. The RAVEN is pitched as an affordable high quality cinema camera at a price that will appeal to small production companies and all kinds of creative agencies that don't necessarily need the mighty higher-end RED products. By putting a package together and having it in the store of the world's most sucessful computer and electronics company, it's going to be seen as accessbile option by a very large audience of professinal creative buyers.

Irvine, CA — August 1, 2017. RED Digital Cinemaâ announced today that its RED RAVENâ Camera Kit is now available exclusively through Apple.com and available to demo at select Apple Retail Stores. This complete handheld camera package features a diverse assortment of components from some of the industry’s top brands, including:

The RED RAVEN Camera Kit is available for $14,999.95. Customers can buy this package or learn more at Apple.com and select Apple Retail Stores.

“We are very excited to work with Apple on the launch of the RED RAVEN Camera Kit, available exclusively through Apple.com,” said Jarred Land, President of RED Digital Cinema.  “The RED RAVEN Camera Kit is a ready-to-shoot professional package that gives content creators everything they need to capture their vision with RED’s superior image capture technology."

The RAVEN 4.5K is RED’s most compact camera BRAIN, weighing in at just 3.5 lbs. This makes it a great choice for a range of applications including documentaries, online content creation, indie filmmaking, and use with drones or gimbals.

All RED cameras feature a modular design that empowers customers to dial in their ideal configuration for any production environment. Customers looking to outfit their RAVEN with additional accessories should go to www.red.com.   About RED Digital Cinema  RED Digital Cinema is a leading manufacturer of professional digital cameras and accessories.

In 2006, RED began a revolution with the 4K RED ONE digital cinema camera. By 2008, RED released the DSMC (Digital Stills and Motion Camera) system that allowed the same camera to be used on features like the "The Hobbit” trilogy and “The Martian”, Emmy-winning shows like "House of Cards”, and magazine covers such as "Vogue" and "Harper's Bazaar”. The cameras of RED’s DSMC2 line — RED RAVEN, SCARLET-W, RED EPIC-W, and WEAPON — combine compact and lightweight design, superior image quality, incredible dynamic range, modularity, and cutting edge performance — including up to 8K resolution. In 2017, RED's newest 8K sensor, HELIUM, set the new image quality standard with the highest DxOMark score ever.