What's going on at Canon? To understand, look at the EOS C700 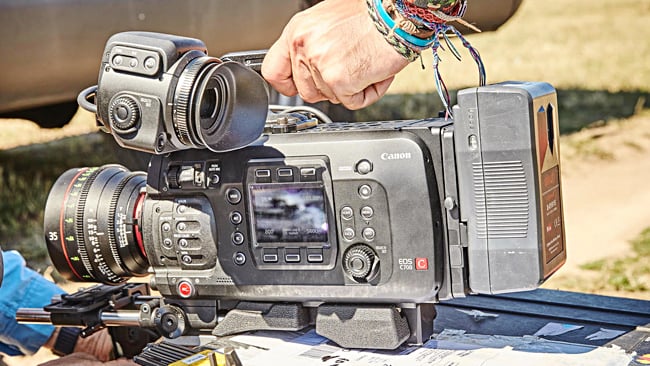 What are Canon's priorities with video? Why hasn't it put more effort into making the 5D MK 1V a better video camera for shooting video? We think we know why.

To understand Canon, it really helps to visit the company and talk to the people who work for it. We’ve done this twice recently. Both times we went to its US headquarters in Long Island.

It’s an impressive building - very modern and surprisingly large. Why surprising? Because it’s easy to forget that Canon is about more than just photography. Canon’s business extends way beyond professional and enthusiast cameras; medical and scientific imaging are important to the Japanese giant as well as printing on a large and small scale. 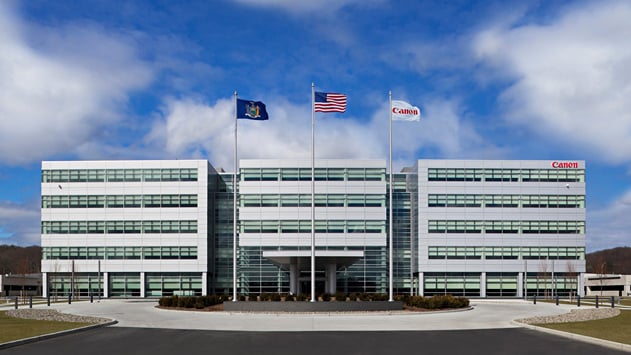 We were shown round Canon’s “museum”. It’s a huge area where every important product in the company’s history is on display. I spotted all the cameras that have been important to me in the past. The AE1 was there - this was one of the first automatic still cameras and a massively popular model. Canon showcased their printing technology too: printouts from their 50 megapixel 5Ds were very impressive.

As we left our tour of Canon’s historical showroom, one thing was clear: this is a company that makes images. Every product that it makes exists to make the best possible image within technical and cost constraints.

What you don’t see at Canon’s headquarters is any indication of how many of each category of product the company sells. We can only guess at that. But we do know a few things.

First, Canon sells many times more still than video cameras. There are several reasons to believe this. Canon’s booth at the recent NAB show in Las Vegas is pretty big, as is their stand at Europe’s IBC. But their space at Germany’s PhotoKina is maybe ten times the size. Still photography is much more important to Canon than video in terms of volume of sales. It’s not really surprising. Professional and enthusiast photography is a huge combined market. Even though smartphones have practically obliterated compact camera sales, bigger, better cameras continue to sell to hobbyists and those who make living from photography.

This doesn’t mean that video is a second class format for Canon; the company is clearly very serious about moving images, but their priorities are different from what video practitioners might expect.

When the Canon 5D Mk II burst onto the scene in September 2008, it was eagerly embraced by the filmmaking community. This didn’t happen because it was the best way to make cinematic video on a budget: it was the only way (with an honourable mention to Nikon here for making the first video-capable DSLR in the form of the D90, announced in August 2008). The full-frame video from the Mk II looked gorgeous and started a wave of DSLR video making that launched the careers of many of today’s filmmakers.

But the 5D MK II was far from perfect as a video camera. It was never intended to be. There was always going to be something better.

The 5D MK III was indeed better and kept the DSLR video going for a few more years. The 5K MK IV has been roundly criticised because while is able to shoot 4K, it does so at less than the full sensor size, losing the full-frame effect.

Meanwhile, in the nearly nine years since the 5D MK II arrived, a lot has happened. Enough, in fact, to change things completely.

There are now affordable, large-sensor dedicated video cameras from the likes of Sony (FS5, FS7), Blackmagic (Ursa Mini/Pro), not to mention Panasonic’s DVX2000 and JVC's LS300. We’re even seeing video makers who started out with a 5D MK II moving on to RED cameras and other top-end devices.

Canon’s DSLR offerings are still used for video by people like me who shoot a combination of stills and video. In fact my favourite camera of all time remains the Canon 1D C: the first DSLR to shoot 4K. Canon has been criticised for its use of MJPEG in its 4K-capable cameras. In my view this is a capable codec (after all - JPEG is still almost universally used in still cameras) that’s almost highly compatible and which delivers pictures that don’t need grading right out of the camera.

But the focus of Canon’s video strategy is now elsewhere, in their dedicated cinema cameras.

And this is where I think we should be looking for clues to Canon’s future plans.

The Canon C700 is a high-end camera at a high-end price. We’ve recently featured footage from Brett Danton that suggests it’s a very capable camera indeed. When we talked to Canon at NAB last week, it was obvious that this is a flagship product and very important to the company.

We’ve featured footage showing the the camera hardly suffers from rolling shutter at all. It’s robust and - at last - a sensible shape for attaching accessories. Apparently it’s very good in low light, too.

All of which is of only minor interest if you can’t afford the price.

But that’s not the point - at least not the main point for Canon’s video future.

I have no tangible information on this - I’m only extrapolating and guessing; no more than that.

But I have a feeling that the Canon C700 will form the basis of the next generation of Canon Cinema cameras, and that we will see lower cost cameras in the same line. I think the C700 tech will filter down.

Some people are saying that the C700 is too little, too late and too expensive. I don’t think any of those is true. The information I have is that it’s an extremely capable camera with exactly the qualities that are important to today’s working production companies. Don’t forget what we said earlier in this piece: that image is everything for Canon. It’s very rare for Canon to be criticised for image quality alone.

Just to reiterate: Canon sells many times more stills cameras than it does video devices. That’s not to say it’s not serious about video. But there’s a reason why Canon doesn’t spend a higher proportion of its R&D budget on video DSLRS: they’re a small part of the overall picture for the camera company. It just doesn’t make sense. What makes far more financial - and technical - sense is to gather all of the cinematic video expertise into a division that makes dedicated movie cameras. I suspect that we’re nearer the start of this strategy than the finish, and that we’ll see 8K and more 4K cameras in the “Cinema” line.

What do you think? Let me know in the comments.