If you thought Digital Bolex was radical, wait until you see their lenses… 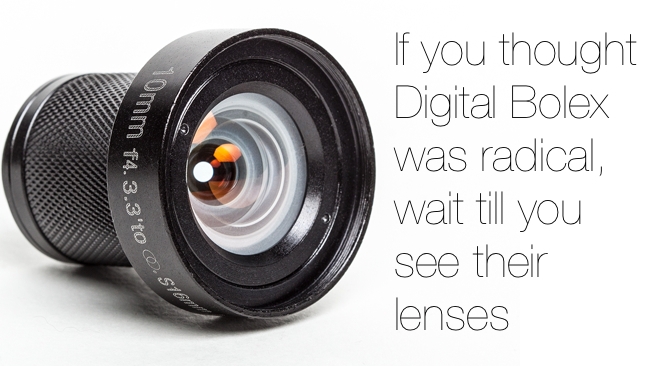 We're giving a lot of space to the Digital Bolex project because it's genuinely different and original. And the news keeps coming, and it's getting weirder, but still plausible. In fact there are such dramatic ideas coming from the little Kickstarter company that you have to begin to wonder how much it's going to change the world of video

The new lenses are designed to be cheap, but of the highest quality. These two attributes are normally opposites but by introducing a fundamentally new lens topology, complexity is reduced, and the money saved can go back into the optics themselves.

We won't go into detail here because it's a complicated subject and Joe Rubenstein covers it nicely on the Digital Bolex site.

What's radical about these lenses is that they come with a fixed focus and a fixed aperture. The lenses are kept simple by having no independently moving elements. If one part moves, they all move. Of course, having a fixed focus is a pretty big downside, but there's more to it than that. Need different apertures? Buy more lenses.

In fact, there is a focus mechanism, and it's built into the lens mount, not the lens itself. This, to put it mildly, is pure genius, because it means that you only have to buy one lens mount mechanism and it will work for all Digital Bolex lenses. The complexity is taken out of the lenses and because you only need to buy the lens mount once, all the lenses become cheaper.

The focus is electronically controlled and is initiated by the camera's crank.

Because the lenses are so small, and because they share a lens mount, it's possible to fix several of them at once on a rotating turret. You'll be able to change lenses in seconds, without exposing the sensor to dust.

Rubenstein goes into detail about crop factors etc, and you can read about it in detail here.

We may be wrong, but we wouldn't be surprised if this announcement about lenses quadruples interest in the Digital Bolex Project.