UK sees the biggest ever order for 4K hire equipment 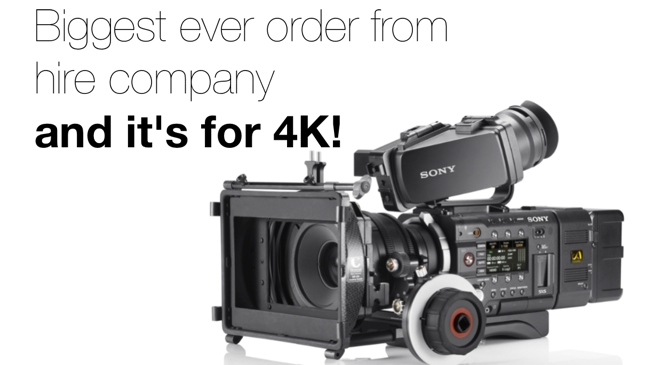 Procam, a UK-based hire company, has shown a huge commitment to 4K by placing the biggest ever order for equipment by a hire company with Sony

How long is it until you have a 4K television in your living room? It's anybody's guess at the moment. My TV is already six years old, but it was top-of-the-range when I bought it, and it's capable of 1080p, so Blu Ray looks lovely on it, and I'm resolved not to change it until I can buy a 4K one. Before that, I will have to buy a bigger house, but that's another matter

But if the timescale for 4K being mainstream in the home is uncertain, there are two things about 4K that are definite.

One is that it WILL be adopted in the home: we just don't know when.

Two is that all types of productions will be made in 4K, in the very near future, if not already.

Last week, we saw irrefutable evidence for that in the form of the biggest-ever order for 4K cameras and equipment from UK-based hire company Procam TV.

Procam is the UK's largest broadcast hire facility and is based in London and Manchester. Their order, worth £500,000 ($783,100; €584,060) is the largest single purchase in the broadcast hire industry. The first 12 cameras including Sony PMW-F5s and PMW-F55s, will be available for hire in early this month.

Procam's Managing Director said of the adoption of 4K:

4K is undoubtedly the hottest topic in the broadcast industry right now and by making this significant investment, we are leading the way in driving more professional 4K production.

As evidence of Procam's commitment to 4K, they're holding an event called "4K or not 4K" on Thursday 13th February in London. You can book here for the event.

Redshark will be attending and reporting. And don't forget RedShark's own 4K seminars at the BVE in London on 26th-28th February.