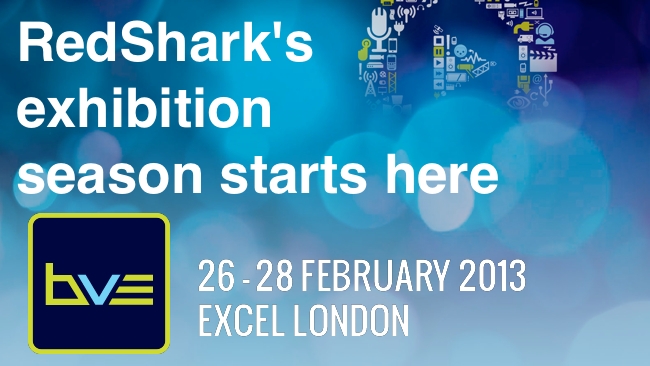 RedShark is the website for the Moving Image Industry, and we're growing fast. We want our readers to have the best possible coverage of events and issues. And that's why we're not just attending the big industry shows around the world, we're taking part in them

The first important show since we started in October last year is the Broadcast Video Expo in London.

Falling in between IBC and NAB, BVE is often the first opportunity to see and touch real products that were announced at IBC, and it's where manufacturers often hint at what's coming up at NAB.

For Europeans, it's pretty close

But more than that, it's a real hands-on show on a manageable scale, and it's a two hour flight from most countries in Western Europe.

We're Media Partners for the Canon 4K Digital Cinema, and we have a booth right outside it. Inside, we're hosting three seminars, all with a 4K theme (the titles and content of these might change slightly). All three start at 10:30 and last for 45 minutes.

We'll let you have more details soon but meanwhile if you want to register for the show, just click on the adverts at the top and side of RedShark.

And if you can't get there (because you're not in Europe, for example!) then watch our coverage of the show to see what might be coming up at NAB. We'll also be recording our seminars so that you'll be able to see them wherever you are.