Should camera people be above the line? 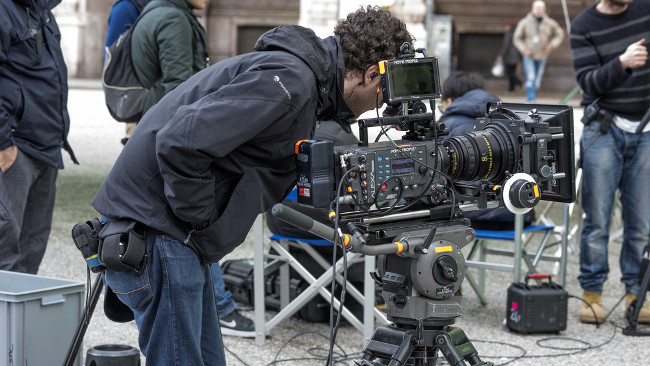 Imagine camera people and departments sharing in the residual income of projects. It's a reality for the German Society of Cinematographers, but can it happen further afield?

Film and television camera people traditionally get an absolutely terrible deal. Consider stills photographers, writers, composers and actors, all of whom can and often do receive additional fees if a production is successful, whether that's a commercial that runs for longer than was originally anticipated or a film that does enormous business. Comparatively, camera people get absolutely stiffed, receiving no royalties or repeat fees – no authors' rights, essentially – regardless of the level of success achieved by a production.

Whether or not Zoe Saldana would have agreed to be painted just that shade of green if they hadn't promised her a percentage of the action figure sales is, of course, a matter for conjecture. I have no idea if they did that or not. I'm making it up. I do know that I've never heard of a posable Director of Photography Figurine with Action Light Meter and the ability to bark pre-recorded phrases about losing the light.

Line in the sand

It is completely reasonable to debate the contribution anyone in particular might make to a show. There are, according to dubious tradition, above the line crew, who, broadly, have either a significant managerial or creative responsibility and, therefore, a financial stake in the production, and below the line crew, who don't. As Barry Ackroyd, BSC, recently made clear in a piece on the society's website, that separation is plenty dubious, but it's often been said that the director of photography often is the line, even on very big shows, where there's clearly a creative contribution from all areas of the camera department. On productions other than internationally-released feature films, the question doesn't even arise. A camera person is hired, the work is bought and it's owned by the production company and, until recently, there was very little thought of things being any other way.

On an international level, it's a very small change, but the German Society of Cinematographers (Berufsverband Kinematografie, the BVK), who have struck an agreement with exactly one satellite channel to pay fees based, via various formulae, on the success of the production. Much of this apparently stems from the actions of cinematographer Jost Vacano, BVK, who shot the incredibly successful Das Boot. The production has existed as both a television miniseries and a feature film and has doubtless accrued vast piles of gold for the people who produced it – but not, until now, for Jost, whose camerawork made such a huge contribution to its watchability.

In some sense, this sort of thing is hard to argue with and there's no point in trying to argue money away from people. This notwithstanding, there are essentially two objections. The first is practical: the grief and hassle associated with using music in film and TV productions, especially non-traditional productions of the sort that find their way to YouTube, is epic in scale. The system of music licensing has failed miserably to keep up with the modern world – in fact it's failed to keep up with even quite historic things, now – and this sort of nightmare absolutely must be kept away from camerawork.

It's early days, though, and if the situation with licensing camerawork ever gets to the point of causing that sort of inconvenience, quite a lot of money will be made out of it. Or at least, quite a lot of money will be made out of it by some people, which is the other objection. If anyone's going to benefit from this sort of arrangement, everyone should. Right now, it's a scheme which, to be frank, is mainly likely to benefit people who are already being paid very good rates to shoot high-end productions. Given the relative ease with which exhibition facilities like YouTube can count viewers and assign credit, and given the amount of money that organisations like Google make out of it, it would be reasonable to ask for the love to be spread a little. After all, they do it for musicians.

Of course, that's likely to be the source of significant resistance; big business will naturally prefer not to pay fees to anyone, especially on an ongoing basis. Capital expenditure is one thing; a rental agreement is quite another. It's difficult to imagine the current music licensing situation being established now, given the amount of corporate resistance it would create. This highlights the achievement of the BVK in this matter. What's important now, should this go any further, is that it's done in a way which doesn't create the sort of complexity that stops people using services, and that the trickle-down effect beloved of dedicated capitalists actually benefits people working on smaller shows. Too often it doesn't.