How to complain effectively 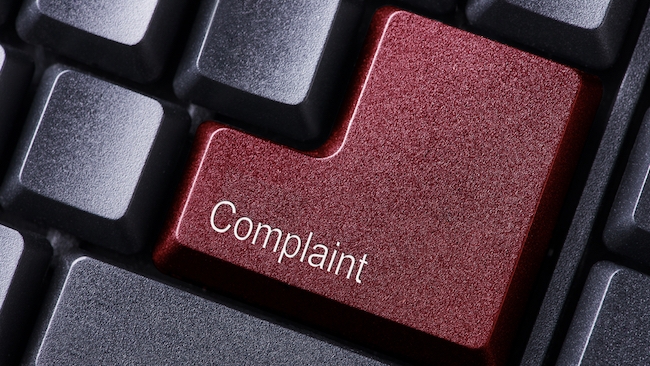 In case this seems like a really downbeat title for an article, please let me reassure you that it’s not. In fact it’s more of a tale about a really nice world where nice people say nice things to each other, and, ultimately, get their broken cameras fixed. Or something like that....

I’m a big complainer. That doesn’t mean that I like complaining, but I do enough of it to know a bit about what works and what doesn’t. And just in case you think I’m a bellicose maverick who just tries it on for the sheer pleasure of it, that really isn’t the case. I don’t like conflict, but what I do like is value for money, and goods that work (and food that isn’t mundane, mediocre or otherwise poor enough that it has to be sent back).

It’s hard to write this without sounding preachy. Please, therefore, understand that I’m not writing this from a particular moral standpoint, but out of sheer pragmatic, empirical experience about what works and what doesn’t when you complain.

First, let’s deal with the nature of the world “complain”. It is, I have to say, rather loaded. It sets you up for conflict. There’s nothing positive-sounding about the phrase “I’d like to complain”, is there?

Depending on your grievance, there are much better ways to put it.

For example: let’s say you’ve just been served a meal in restaurant, and that it’s not hot enough. Time to complain!

“Is everything alright with you meal, Sir (or Madam)?"

“Well, actually, I’d like to give you some feedback”.

Believe me, this is just as effective as saying that you have a complaint. It’s just that it seems much more constructive.

How this applies to cameras

So, what happens when you buy a camera - or some other tech-based product - and it doesn’t seem to be working properly.

The first thing is to make absolutely sure that it really isn’t working properly. Sometimes new users misunderstand products, especially new, innovative ones.I’ve done it myself!

With products like cameras, it’s all about the image quality. If you think there’s something not right about it, try to isolate the issue. Is it repeatable? Could you, for example, reliably show the problem to a friend? Can you take a screen grab that would illustrate the problem, or can you make a file that you could send to someone who would be able to see the issue too? (try to avoid transcoding it or putting it on Vimeo or Youtube - these degrade the image and you can’t make valid quality assessments from them.)

Evidence is your friend here. If you and your friends and colleagues think there is something wrong, and this is not a performance limitation you would expect from the marketing literature or the camera’s manual, then you probably have grounds to complain.

It’s also definitely worth checking with other people on the internet, although you can’t always rely on this.

Normally, if there’s an issue with a product, other people will have seen it and written about it. But this is not scientific. Here’s an example. Someone sent me a frame grab from an image he’d taken with a new camera. You could see banding in the clear blue sky. This was typical of the type of artefact you see with 8 bit video. You could take the very best images from the most expensive cameras in the world, and if you reduced them to eight bits per colour channel, you would see the same thing. It’s what 8 bit video looks like. The blue sky illustration is probably the worst possible case, because it really stretches the format to breaking point. But it’s not a camera fault: it’s a feature.

So in this case, you’d have no cause for complaint, unless the camera had been promoted as giving 10 bit resolution.

It’s really hard to complain on the grounds of quality, unless you can supply consistent evidence. Is your camera too noisy? That’s incredibly subjective. What you would have to do is make some footage that you would expect to be fairly noise free, and show that it was noisier than most people would reasonably expect. Make an exact note of the circumstances and of the camera settings. Ideally, you’d do this with charts and under controlled conditions, but that’s rarely possible. Again, see what other people are saying about the issue.

Also understand what the natural limits are for your camera. There are, for example, things you can do with an aircraft that will make it crash. That’s not a sign of a faulty product. If you try to fly any plane at 25 miles per hour, it will not survive.

So if you have a camera with a rolling shutter, don’t be surprised if you get a slanty picture when you wave it around wildly. And don’t be too surprised if you get an occasional compression artefact when you shoot a very complex moving background. These days codecs are remarkably resilient, but there are times when you can break them, normally right at the edge of the camera’s performance envelope.

Let’s say, then, that you have evidence that your camera is underperforming. What do you do with it?

Ideally you’d take it to the product manager of the manufacturer that made the product. But this isn’t going to happen. With mass market products (which these days includes many, if not most, professional products) it’s very hard to speak to the manufacturer directly. Instead, you have to deal with your reseller.

This should not be a problem. Remember that no one wants an unhappy customer. Your reseller should be able to report the issue to the distributor that supplied them. Distributors will have specialists, trained to have a detailed knowledge of the products. They will also have direct access to the camera manufacturers.

The key thing throughout this process is getting everyone from the reseller to the manufacturer to agree with you. That’s why the evidence is so important.

This matters whether you have a camera that is individually faulty, or, in very rare cases, where there is either a design fault or a bug in the firmware.

This should go without saying, but try not to get angry at any stage. Staying focused on the issue, and getting your point across should be the priority. Remember that even if you’re dealing with a big company, your interactions are with people. These days, although consumer law varies from country to country, it’s unusual to be fobbed off. If you have the evidence, and you explain your grievance properly, there’s every chance that you’ll find a resolution.

To be honest, your biggest potential source of frustration is a lack of communication. Sometimes, even for distributors, it’s hard to get the attention they need from manufacturers. This is not necessarily the manufacturer’s fault (or at least not of the people who work there).

As high tech products have got cheaper, there are fewer and fewer people working at the companies that make them. As employees are laid off, the ones that remain are expected to take on more responsibilities, and this inevitably stretches them to the extent that communication suffers.

It’s important to be firm and persistent (and always polite). What might seem to be indifference on the part of a distributor or manufacturer may actually be a failure of communication. Insisting that the right people know of your complaint is an effective approach.

Manufacturers are not indifferent

It is a big mistake to assume that a large manufacturer doesn’t care or is indifferent to your problem. As a magazine editor, I have some insight into this. Almost inevitably, if there’s a problem with a camera, manufacturers want to hear about it, and want to fix the problem if possible. Sometimes, this is not apparent immediately to end users, for the simple reason that if there’s a problem with a product, it’s difficult for a manufacturer to comment on it until they have all the facts. That’s why you might see frustratingly non-comittal statements like “We are looking into the situation and will report back later”. At this stage, they’re just trying to gather the facts.

If you follow the guidance I’ve given here, it will maximise your chances of getting a resolution to a problem. Above all: remember that you’re dealing with people. Stay polite, reasonable but firm, make sure you have good evidence of the issue, and the chances are you’ll get a quick resolution to your problem.