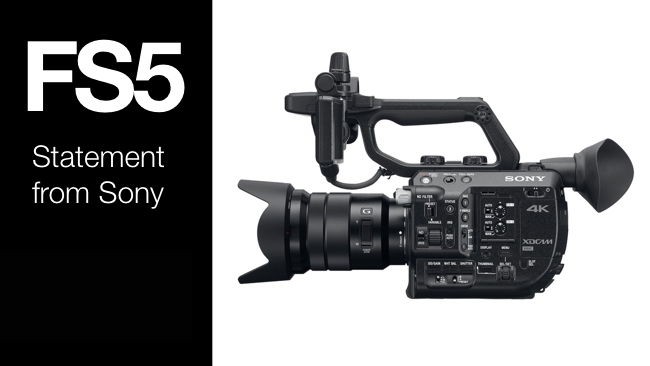 Some users have reported issues with the Sony FS5. We spoke to Sony about it

You've probably heard about the reported issues with the Sony FS5 camera, where some users have mentioned problems with noise and compression artefacts. One of the really confusing aspects of this has been that different users are reporting different things.

Meanwhile, others are using the camera with no problems at all. Several experienced camera operators have suggested that these are not "issues" but simply the result of what happens when you shoot in poor conditions with certain settings. This was the view of our own Phil Rhodes, who's just reviewed the FS5, and whose report you'll see soon. Phil also made the point that this was never intended to be a camera for making cinema films, and that it should be seen more as an affordable, lightweight large sensor camera that you can "pick up and go".

We had a conference call with Sony in the US. As a result of that, they've provided a statement to us. Before I show you the statement, let me just comment on a couple of things:

1) Because of the varied reports coming in, it's not clear to anyone, including Sony, where the fault might be, or even if there is a fault at all.

2) Sony can't really be expected to say more than this at the moment, because of the point above.

I just want to say that everyone I spoke to at Sony in New York was open and eager to resolve this situation. They don't like it any more than users do when something is perceived as not being right.

“Sony is aware of this reported issue with the PXW-FS5’s performance. Our engineers are working to understand the specific issue that users are facing, and then we will determine the root cause and provide a solution.”

Sony is clearly looking to resolve the situation, and I think it can be commended for that.