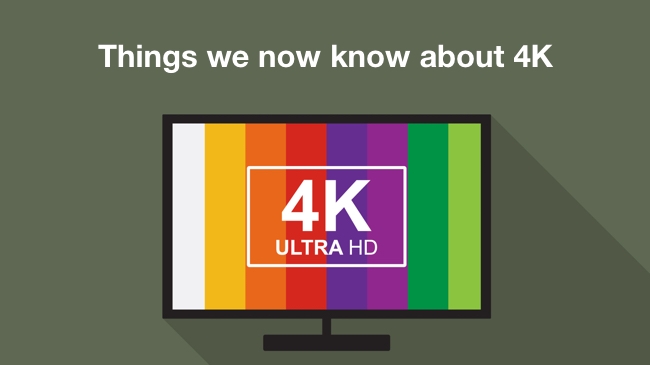 A quick look at just how far 4K has come since RedShark News first debuted.

Three years ago, when we started RedShark, we were amongst the first to give proper coverage to 4K. At the time, the first - expensive - 4K sets were appearing and there was little indication how those ultra high-end TVs would receive their pictures. There was still less idea about how anyone would afford them, because their starting price was around £15,000.

Things are different now and we've learned a lot since then. Here are some current facts, in no particular order.

This is a staggering statistic and it's important to understand how we came to it. Our methodology was simple. We just went into a few high end TV stores and counted the sets on display. Our benchmark in the UK for mass adoption of a new standard is John Lewis. For those outside the UK, this is a chain of department stores that are perceived as 'upmarket', but are nevertheless frequented by a wide demographic with widely varying incomes. Part of the reason for this is that the stores have a 'never knowingly undersold' policy. They will refund the difference if you find anything cheaper. That, together with their 2 year warranty on all TVs, means that they're a popular choice if you're buying a mid to high-end set.

John Lewis always has a formidable range of sets on display. And this is what we base our statistic on. The mix of sets in other shops will vary, but this chain of stores rarely gets it wrong.

We counted all the sets over 40". There were thirty different models. Twenty four were 4K. We make that 80%. It won't be long before you can't buy a large HD set.

2. Nobody asks for a UHD television

There's nothing scientific about this. It's just that nobody talks about UHD. I listened to customers talking to salespeople. It was all about 4K. Nobody mentioned UHD. Not once. Ever. Except to say, "What does UHD mean on all these 4K TVs?"

3. You absolutely can tell the difference

It's chalk and cheese. There's no question that from a suitable viewing distance (everyone knows you have to sit closer to 4K sets to appreciate the detail), there is a significant difference between HD and 4K. Ignoring the inevitable over saturation and excessive sharpening that's endemic to TV demonstrations, 4K simply looked better.

4. They are much cheaper than everyone (except us) said they would be

We've always said that 4K TVs would plummet in price and, effectively, they're the same price now that quality HD TVs were three years ago. You can even find absolute bargains. A few months ago, we saw a 40" 4K set for ¬£279. How bad would it have to be not to be worth that? (Specifically, it was only equipped with HDMI 1.4, which restricted its framerate to 24 or 25 fps - probably OK for movies, but horrible for sport). Higher end  4K TVs go from around £600 to £2,400, with OLED TVs ranging from roughly £2,400 to £4,000.

5. People are searching out 4k content (because they're buying the TVs)

Now that people are buying 4K TVs (indeed, now that 4K TVs are the default choice!), there's an actual demand for 4K content. Mostly - just anecdotal evidence - the choice is Netflix, not that there's much of a choice. In the UK, BT Sport has a 4K offering that is being heavily promoted in the TV stores and the new SKY TV box has a 4K output. So, it's on its way and it can't come too soon, seemingly.

6. 4k cameras are everywhere, even in phones

A new non-4K camera is a rarity. Before long, 4k phones will be the norm. But what the abundance of 4K TVs really means is that there will be an insatiable demand for 4K content. This might be the time for those shooting in HD to at least consider moving to 4K acquisition, if only as a future-proofing exercise for their material.