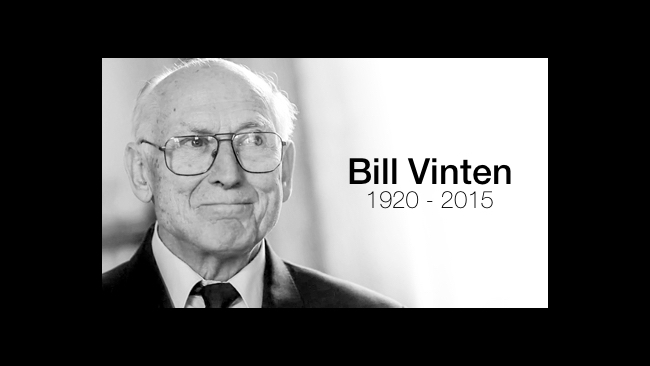 If your surname was "Vinten" there's an almost one hundred percent chance that people would associate you with Tripods. Sadly, Bill Vinten, son of Vinten founder, William Vinten, has died, aged ninety five.

Bill was a well-known cinematographer and was instrumental in camera support design.

Vinten is now part of Vitec Videocom. They've written a tribute to Bill which we've reproduced below.

A Tribute to Bill Vinten
On Sunday, November 8, 2015, we lost a man of vision whose achievements shaped the broadcast industry worldwide.

Bill Vinten, son of founder William Vinten, was one of the key influencers for The Vitec Group and instrumental in what it is today.

As a renowned cinematographer during and around World War II, Bill understood the needs of camera operators, translating his knowledge into remarkable products that transformed the industry.

His achievements include the design of the first camera pedestal that allowed cameramen to track and jib simultaneously without losing sight of the viewfinder, along with the first pan and tilt head to meet the BBC's specifications for manoeuvrability. With further enhancements throughout the years, these designs laid the groundwork for today’s flagship products, becoming internationally recognised by broadcasters around the globe.

“Bill’s incredible dedication to our business spanned a long life of service that continued well beyond retirement,” said Stephen Bird, CEO of the Vitec Group. “The Vinten name remains one of the most respected in the camera support industry with over 240,000 units in circulation. We are truly indebted to this remarkable and lovely man.”

For more details on the Vinten story, please visit the Vinten timeline and the Vinten YouTube channel.