So, where's all the new stuff? 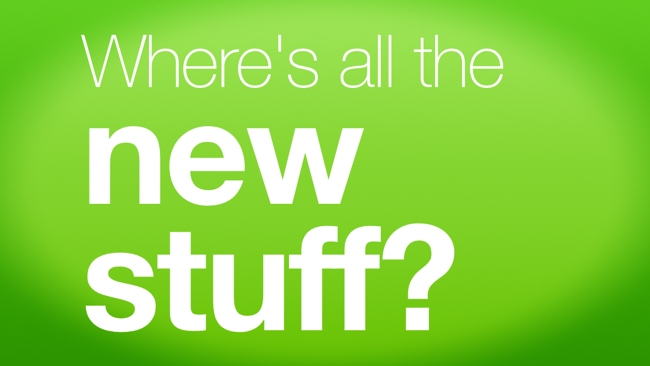 Last month's IBC in Amsterdam was a great show with a record attendance and a decent buzz to it, but where were all the new products?

IBC in Amsterdam is the world's second most important exhibition for the film, TV, video and broadcast industries, and by far the biggest in Europe.

It's easily big enough to be the platform for some big product launches.

This year's show was busy; you might even say thriving, but there was one thing conspicuously missing: new products.

Let me clarify this.

There were actually lots of new products, if you knew where to look, but there just weren't any, you know, headline grabbers.

Except for one. This was interesting. Whenever you asked people if they'd seen anything good, they'd say "well, there was the Sony FS5, but not much else". And it was true: there was very little new at the show that hadn't been seen before. Lots of products that had been announced at April's NAB in Las Vegas were now shipping (like Blackmagic's URSA Mini), but, really, there was very little substantial news.

Why is this? Does this mean that the pace of innovation is slowing down?

No, I don't think so. But I do think we've reached a point where apart from making existing things cheaper, it's hard to know where to go next with new products.

But this may not be a bad thing.

In the rush to bring out new products with more resolution, better codecs, more features etc, what sometimes gets left in the slow lane is usability. This is hardly surprising, because if you're set on releasing a new camera at a trade show, which is obviously a fixed point in the calendar, you're not in a position to say "if we just delayed it by a couple of months, we could re-engineer that grab handle".

Or, "if we missed out on IBC, we could change the menu structure so that you don't have to go three levels deep to change autofocus mode".

I don't for one minute think the pace of innovation is slowing down. Don't forget that releasing a product is the end of the development process. The bulk of development takes place behind the scenes and, mostly, in secrecy.

I think that we are now in a period of consolidation where the groundbreaking products we've seen over the last few years going to be refined and gradually improved. I suspect that many professionals have had enough innovation for now. Almost anyone can afford a cinema-quality camera. But what some people want is a stable platform so that they can save up and buy all the other stuff you need to make videos, like lenses, for example.

Do don't be too disappointed that we didn't see much new stuff last month. And, as I keep saying, continue to expect the unexpected. Real innovation is happening faster than ever. It's almost inevitable. Faster computers mean that we can design products and processes that are better than the previous generation. Occasionally we come up against physical limits, but we work round those with even newer technologies, and the upwards trend continues.

All of which makes it very difficult to predict when the next big development will come.

So keep watching out, and enjoy the ride to the future.