A 4K TV for one-hundreth of the price when sets first came out? Now that’s progress… 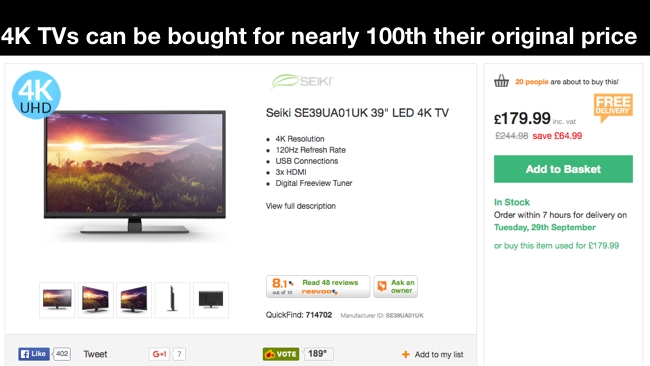 We've spotted an unbelievable deal for a 4K television that underscores just how far prices have fallen.

Every so often, there's a special offer that grabs our attention. Usually, it's a product that's being sold off at an unexpectedly low price and often that's because it has a specification that's beginning to look a bit out of date.

Well, that's exactly what's happened here with this 39" 4K television at an almost bafflingly low price of £179. It's around one hundredth of the price of the very first 4K sets.

It's hard to tell from the sketchy details in the advertisement, but it's likely that the biggest flaw with this television is that it only has HDMI 1.4, which would limit it to relatively low frame rates (ie below 30 Hz). While this would probably be OK for watching films, it's not so good if want to use it as a computer monitor, where you'd normally need 60 Hz to see a smooth movement of the mouse pointer.

But even so, it's hard to pick holes in an offer like this. The first 4K sets were literally a hundred times this price and a mere three years ago, it would have been hard to imagine you could buy a 4K TV of any sort for this money.

Admittedly, this is a pretty special offer and it probably won't be around by the time you read this, but the point is that another, similar offer probably will be.

And since 4K still seems pretty futuristic to most people, this does represent a quite incredible bargain: a full-sized 4K set that is almost an impulse buy!