Does this mean we’ll be buying cameras in Six Packs next? 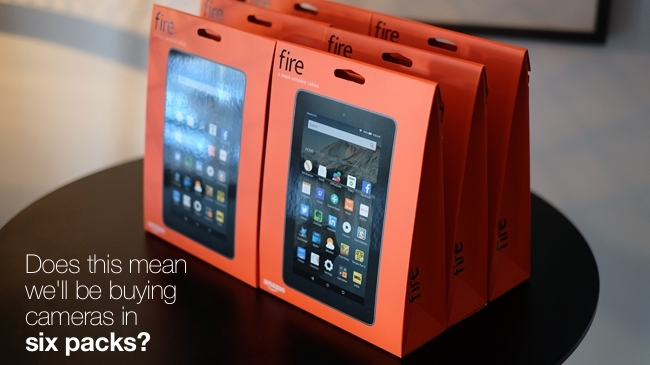 Buy one, get one free next?

You can now buy six of Amazon’s new colour Kindles (i.e. a fully-fledged tablet) for $250. It was eye popping enough to see the price for individual tablets, which is $50, but if you buy five, you get an additional one free. Is this degree of commoditisation about to happen to cameras?

That’s pretty amazing and starkly in contrast to the typical price of high quality tablets which is, well, five times that.

Of course, something has to give and that price, and in this case it’s the screen. Nothing wrong with the quality - it’s IPS - but just the resolution. At 1024 x 600, it’s lower than the average smartphone and might remind you of your last netbook, but it still won’t look bad on a seven inch display. Apparently it’s a better pixel density than the original iPad Mini.

The build quality is okay too.

There’s no doubt that the cost of making tablets has fallen, and there have been others at this price, but they have mostly been terrible. I’ve tried some. Mostly, you turn them on for just long enough to realise you’ve made a mistake. For around twice this price, there are some genuine bargains, though.

I suspect that Amazon is selling these at or near a loss, for the perfectly good reason that they want you to have zero barriers to downloading films from Amazon Prime. Buy a six pack and you can even have one in the restroom. And who cares if it’s not full HD if it’s got a small screen?

But cameras are different from tablets. For a start, they’re precision devices. Professional camera equipment is made to precise tolerances (not that iPads aren’t - but they are mass market products). Only professionals buy professional equipment, and that means there’s a built-in restriction on the number of units that are likely to be sold. Sometimes the global market is big enough to justify the expense of developing new sensors and new chips (typically ASICs) but each of these silicon items costs millions to develop. Without a mass market, they bump up the unit price of cameras. Lower volume products tend to use FPGAs. These are remarkable chips that work at hardware speeds but can be reprogrammed at boot-time with software. They’re not cheap, either, nor is the brain-power that goes into writing their software.

And then there’s lenses. If ever there was a product that you can’t make cheaply it’s professional optics.

So, no, you won’t be buying cameras in six packs any time soon (Unless GoPro has some ideas…) Even though it does sometimes (often, in fact) seem like there’s a “race to the bottom” underway.

The professional camera market is different to the consumer arena. It needs to be for manufacturers to keep up levels of quality and innovation in a small industry. And I would imagine that most camera manufacturers view Amazon’s six pack Kindle ploy with a nonchalant distain.