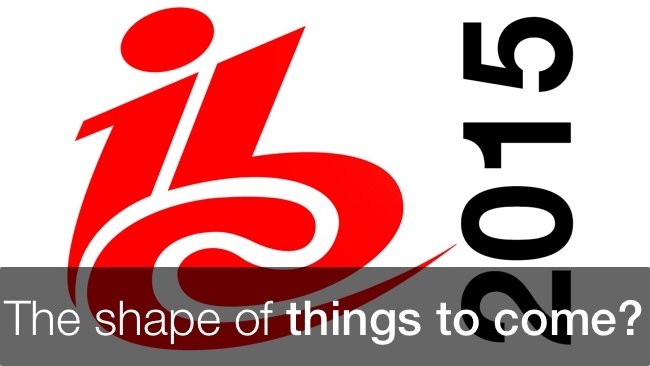 With Canon already having set the industry alight with its grab for the 8K high-ground, Phil Rhodes gazes into the depths of his crystal ball to see what news IBC2015 might have hiding up its sleeve.

The received wisdom of the film and television industry is that NAB is the biggest show where all the biggest announcements are made. Last year, though, Blackmagic announced their acquisition of the Fusion compositing package at IBC; it was also an early opportunity for hands-on with the JVC GY-LS300 and Panasonic announced shipping details for the Varicam 35.

This underscores two things: first, people tend to announce things at one trade show and release at the next, which stands as far warning to anyone who starts hyperventilating at the thought that a recent purchase is about to stop being the latest thing. The second thing is easily understood by a simple thought experiment: if you were a company, particularly a small company with a new product that could disturb the marketplace, would you really release in Vegas, against the vast promotional budgets of the big players?

That's no prediction, of course, but nonetheless we shouldn’t be surprised if something really interesting does pop up. The Fusion announcement, for instance, was as unprecedented as anything could be from Blackmagic, whose precedent for being unprecedented is now well-established, if you see what we mean.. Sony has already teased a new FS camera, and if it's as good as the FS7, that's no bad thing, marketplace congestion notwithstanding. Even so, much as cameras are, as described to me by one prominent first assistant cameraman, the centrepiece of the process, there are other fields in which simply making a good product cheaper would raise eyebrows. Reasonable-quality lighting, for instance, is currently still expensive, with the high power density of HMI unchallenged in its field and LED becoming progressively more competent, especially at 100 watts and below. There's nothing so outrageously complicated about an HMI that means it has to be as expensive as they are, unless you need the enormous build quality of Arri. One day, someone will show an affordable HMI at a major expo – or at least, I've been saying that for years, and I'm going to keep saying it until it happens.

Still, progress doesn't just have to mean greater cost-effectiveness, welcome though that is. The suit-wearing side of the industry seems to have decided that virtual reality is the next big thing, or at least the next thing they're going to try and make big. This sort of thing would be easier to take if there was any admission of the problems of transmitting spherical video to people at worthwhile resolution, which are many, or if there were many genuinely interesting ideas about content, which are few. Even so, expect to see lots of headsets on display, as well as an even more muscular presence from people like Nvidia, whose powerful position in the world of general-purpose computing on graphics cards can only be enhanced by the demands of real-time rendering for the combined game-movie hybrids that were proposed at Siggraph.

If VR manages to avoid the pitfalls of 3D – and bearing in mind it shares a lot of the same technological and production concerns – it could be quite interesting, although it's another matter as to whether it is in competition with conventional, silver-screen filmmaking for more than people's discretionary spending.

As the world begins to realise that “the cloud” is an interesting new way to sell “the internet”, we might be thankful to discover internet-dependent features on cameras and post production devices moving out of the headlines and into the conventional specification list, which is probably where they belong. Certainly JVC has done some fantastic work with live streaming and the features of the Sony PXW-X180 have application to those willing to go through the process of setting them up. It's hardly dangerous to assume that this sort of thing is likely to spread, but it should become more run-of-the-mill from this point on. After all, Forbidden Technologies have been doing it very ably with Forscene for a lot longer than the word “cloud” has been fashionable. When was the first “cloud email” service launched? Probably the mid-nineties. Let's get over this, shall we?

The other maelstrom of hype that should, with luck, be integrating with the mainstream is the world of drones: it's now tightly-enough regulated that it's really quite difficult to do professionally in many countries, and the vehicles themselves are relatively easy to make because all of the high-precision work is in the software. The combination of regulation and equipment makes it expensive enough to preclude all but the sort of people who could have afforded a helicopter, or at least a very big crane, in any case. Again, though there's likely to be some whirring noises at IBC this year, let's not get too excited by heavier-than-air flight. As the miniature-helicopter people of a few years ago will tell you, drones are really nothing new, either.

VR, then, is probably the growth area. Unfortunately, while we'll be able to confirm that in a week or so, working out whether it has long-term viability will probably require the next three to five years.