Is this how 4K is coming to the living room? 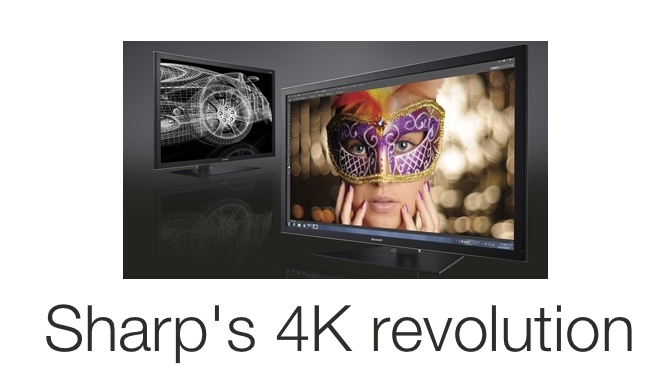 Is the first 4K device in people's living rooms going to be a computer monitor?

Back in October, as a result of our intensive research wild speculation, we concluded that not only will the highly anticipated (but so far invisible) Apple TV sport 4K resolution, but that the first instances of it will be in the form of a 4K resolution computer monitor, or as part of an iMac.

Well, our utter guesswork is proving to be uncannily accurate, with only one minor detail wrong. It's not going to be Apple but Sharp.

At the end of November, Sharp announced a 32" monitor wth a 3,840 x 2,160 resolution. The picture should be great as it uses Sharp's IGZO technology, and edge-LED lighting allows it to have "the industry's thinnest profile": 35mm.
No price is given by Sharp but we have heard rumours that it will be as little as $5,000. If that sounds like a lot, then how about this: just over a decade ago, Sharp had a standard definition 17" LCD television for that price, which makes the new screen, attractively named the PN-K321, an absolute bargain by comparison.

So this adds credence to our wild shot that 4K will arrive in the form of a computer monitor. And if Sharp can do this - what about one of those little-known but resourceful Chinese, Taiwanese or Korean companies?

We predict that you might just possibly see a 4K screen at this year's CES show in Janurary costing less than $3,000.