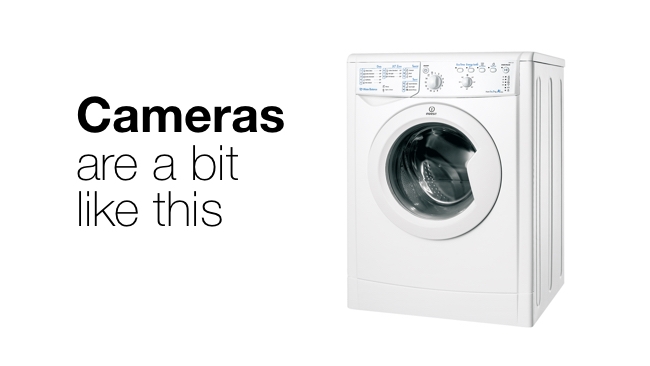 Of all the things you might know about cameras, their similarity to washing machines is probably not one of them. But both suffer from serious problems with their user interfaces.

There is one aspect of washing machines which I think is similar to cameras, and that is the way you control them. My view is that camera user interfaces generally aren't very good. And neither are those you find on washing machines.

Rattlesnakes don't have a friendly user interface either. They weren't designed for everyday use, but somehow some of their characteristics seem to have been acquired by washing machines, cameras, and, don't get me started on this, central heating controls.

All these things will bite you given half the chance.

Just to be perfectly clear about this: I'm not talking about a camera's primary controls. These are the elements in the camera's interface that have evolved to be efficient and ergonomic, like the shutter release and the telephoto zoom for example. These don't lie hidden beneath a nested menu system. Can you imagine if cars had their brakes hidden in a sub-menu called Velocity/Reduce/Now?

Sometimes the menu system in a camera can be a bit like this. You want to change the white balance? It's in a menu. Need to change an auto focus mode? It's somewhere else in the menu. Change recording formats? Good luck with that.

There are, of course, an awful lot of options. Far too many to have physical controls. I get that. But there is now a better way.

How to do it right

When the Blackmagic Cinema camera came out, one of the things I really liked about it was the user interface. Dedicated controls for fast-access, and an utterly simple touchscreen menu for everything else. Admittedly the menu system was sparsely populated at first, but as more and more upgrades came out, it was expanded.

Other cameras that have appeared recently are almost legendary in their inability to make stuff obvious. There is some validity in the argument that as a professional you should learn your equipment inside out and, by implication, not be bothered about the immediacy of the menu system. There's nothing wrong with thinking that but it's not going to help you when for budgetary, technical or creative reasons, you have to use a camera that you're NOT familiar with, the only option you have is to hunt around inside the menu systems until you find what you need.

I have this problem all the time. I see a lot of kit, and a lot of software. I don't normally do in-depth reviews but instead I write "first impressions", and while I don't necessarily report on this (because it seems so universal) my first impression is often "where do I start"?.

This is not like sitting someone in a helicopter for the first time and expecting then to fly a mission. I know what cameras are and I've been using them for nearly 40 years. I've used virtually every video editing package. But it doesn't seem to be getting any better.

The answer, of course, is to stick with one camera and one editing system. I can definitely see the sense in this. Back in the days when I was a working composer, I used a package called Voyetra Sequencer Plus Gold. It was a MIDI sequencer that ran like lightning on an 80286 computer. I knew every keystroke and could would incredibly fast. It was like touch typing for MIDI. It was a pretty hostile package - they all were in those days, but I worked at it and got to an amazing state of proficiency, and I can still remember most of the keystrokes now. Back then, if you wanted to become proficient in another package, it was like learning Mandarin, immediately after you'd mastered Navajo.

Things are a bit better nowadays, but only a bit, because although we now use GUIs like Windows or OS X, and there's a fair bit of standardisation in the menus. Video and audio packages are so capable now that it's almost inevitable that their features will get lost in a taxonomic tangle. Good luck if the thing you're looking for isn't in the File, Edit or Preferences menu. That means it's going to be somewhere utterly random.

Now, going back to washing machines: why is it that in the last twenty or thirty years, nothing has significantly improved their ease of use? I've just got a new one. I have instructions in eleven languages, but none of them achieve any sort of clarity. There are row upon row of buttons, each with tiny and indecipherable symbols written beside them. It's crying out for a more modern interface.

At my previous house, we had underfloor electrical heating in the kitchen and bathroom. You'd think it would be a matter of turning it on or off, and, perhaps, setting the temperature. No such luck. The controller had one button. You had to press it up to twelve times to select an option. You did that with a short push. To confirm the option you had to push it for a longer time. This is not a good system for anything.

So, what's the answer?

The answer is, I think, apps.

Remember that I'm not suggesting we replace the primary controls on a camera with an app on your smartphone - although this could be useful for remote use. I'd just like to see the possibility of using an app to control your camera more commonly available. I know this would improve the washing machine experience and I believe it would help with cameras too. What's to lose? All you'd need would be a BlueTooth connection, because you're not going to be sending any video over the wireless link.

With an app, you'd be able to select all the options in a camera, using a big, graphical, easy-to-understand display. No more squinting at a tiny menu on a camera viewfinder (a notable exception to this is the Blackmagic URSA, which has a screen the size of most tablets).

I think we may not have too long to wait. As the Internet of Things gathers pace, it's safe to assume that remote control apps will start appearing in greater numbers. I'd also hope that there would be a measure of standardisation between them, because - however complicated or illogical a camera's menu system, the app can re-map the options into a standard structure. Maybe this is something that third party developers would like to chip in to.

And of course, this is what I want with my washing machine too. No more accidentally tumble drying for long enough to turn the entire load to cardboard.

Maybe - and this is probably being recklessly optimistic - camera manufacturers could open up an API to their menus: they don't have to give away any secret sauce to do this, all they need to do is allow easy access to their menu structure.

This is a little bit like what happened with MIDI. So called "System Exclusive" messages - which were public - would change parameters on a synthesiser. This would enable synths (with and without keyboards) to be hooked up to "controllers" that would break out the functions into a convenient, easy to use control surface. The equivalent of such a control surface today would be an app.

The point of the app would be not just to replicated the menus on a camera - that would be fairly pointless. It would be to make the menu system better. It could group controls contextually. It would make it easier to move between controls and would give more precision and feedback for making adjustments.

It's not like Bluetooth adds much to the cost of things these days. And smartphones aren't exactly a rarity.

Oh, and this would by my dream interface for a washing machine too, although it's hard to get terribly excited about that...