Could you build your own camera? And would you want to? 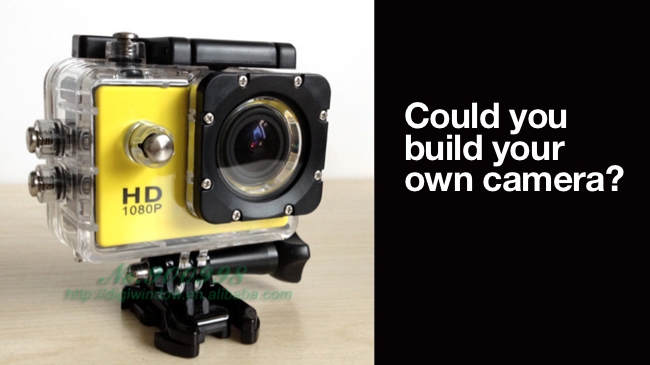 How much does it cost to make a smartphone these days? And does this mean you could build your own camera?

By "make a smartphone" I mean to design one with a unique body and with your company's own branding.

Well, just think about it. You'd have to design the circuit board, specify a screen, choose an operating system, write special drivers, test it, get it passed for worldwide regulations, design manuals and other documentation - and this is far from a complete list.

If you know anything about electronics and software, you're probably going to estimate that this would cost between $100K and $1M. It's not going to be cheap.

Well, those guesses are out by a factor of 100 and 1000 respectively. That's right - you can have your own phone designed an in production for as little as $1000, if you go to the right place in China.

And these phones won't be rubbish. They may lack some of the finesse of the larger manufacturer's phones, but they will look and feel essentially as good.

How is this possible?

It's because modern phones are largely made from commoditised components and software. While it's true that the supergiants of the phone industry - Apple, Samsung for eg - rely on their own innovations in design and spec for their flagship products, these quickly get cloned and made available for anyone who wants to make their own versions.

The parts that make up a phone are now so easily available that, according to a recent article in Bloomberg,

customers can pick and choose from a range of standardised components and put their own phone together for as little as $1000.

Now, there is obviously more to it than this. You have to market your new product and have some sort of distribution chain (although you could undoubtedly outsource this as well).

But the point is that all the parts are there, as well as the software, essentially available off the shelf.

So, are there analogies with this custom phone design service and maybe making your own camera design?

You can certainly imagine this happening at the very low ends of the market - in fact I'm pretty sure it's happened already.

Let's say you want to sell an action cam, not because you really want to be in the camera business, but because you want to have a quintessentially cool product associated with your brand. Do a quick search on alibaba.com and you'll find dozens of "no-name" action cams - some bearing a strong resemblance to the well-known names! You can easily imagine how you could have one of these designs make with your own branding. How good are they? Probably not bad, because they will have access to many of the same components you'll find in the top named brands. But they equally probably won't have the benefit of such focused research and development, nor the assurance of buying a "quality" brand. Remember that fashion is important in this sector.

But what about at the higher end of the camera market?

Well this is perhaps where the comparison with smartphones breaks down. There are some very important differences, the biggest being the focus on quality. The whole point of a professional camera is that it should be able to record great images. While there's no intrinsic reason why a camera put together with commoditised parts shouldn't take a good picture, it all depends on how high the level of integration is.

If there was such a thing as a commoditised image module that maybe had an SDI or raw data output to a recording device, and if that image module was finely tuned to give an outstanding professional quality picture, then, yes, of course you could build a high-end camera around it. But this is the point: components for cameras specifically don't come as finished imaging modules. Instead, you have to buy a sensor and then design your electronics to go with it.

So while it's quite possible to go to a sensor manufacturer and buy a component that is ultimately capable of giving a really good image, you will have to do a lot of hard work to turn that into a product. You'll have to program FPGAs (the powerful chips that you can configure to act like dedicated signal processing hardware buy loading up bespoke software) and you'll have to work out the colour science. There'll be all sorts of low-level routines to smooth out the natural irregularities in the sensor, and then you'll have to figure out a way to control the system via a user interface.

All of this is a big deal. It will definitely cost more like $100K than 1K.

And it's perhaps a good thing; because professionals need equipment that they can depend on, and that means they want to use well-known models from reputable makers. They need professional levels of support and reliability. Performance is largely more important than cost.

So, while the incredible level of integration in electronics is largely responsible for the rapid recent developments in professional video cameras, I don't think we're going to see a proliferation of generic camera camera brands posing a threat to the existing, well known, manufacturers.