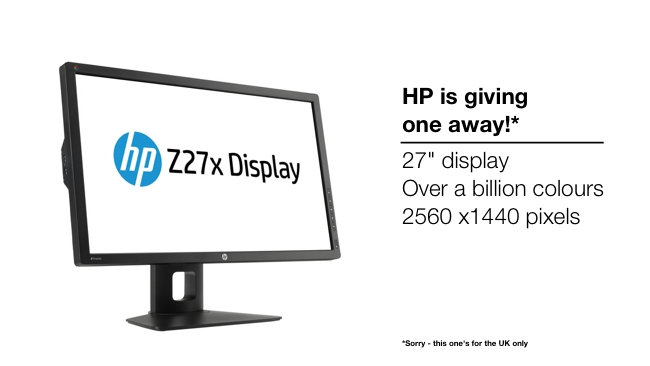 Write in and you could be the proud owner of an HP DreamColor Z27x precision colour monitor (UK only - sorry!)

We're delighted to say that HP is giving away an awsome HP DreamColor Z27x display for a lucky RedShark Reader. All you have to do is send an email to editor@redsharknews.com with the subject line "HP Giveaway" and confirming that your address is in the UK. You don't even have to give us your address at this point - if you are chosen to receive the monitor, we'll get back in touch with you. That's all. (We're really sorry, but this is for the UK only.)

This isn't just any display: it's an award winning one, with an enviable CV. Here's what HP says about it:

Earlier this year, The Academy of Motion Picture Arts and Sciences honoured the HP DreamColor Display and its developers with the Scientific and Engineering Award (Academy Plaque) for the impact it’s made in film, providing affordable, consistent and stable colour throughout the film production process.

The first generation HP DreamColor Displays were a result of an unprecedented technology collaboration with DreamWorks Animation and consultation with several other major studios. The first HP DreamColor display addressed the critical need for a highly accurate LCD display for animators and visual effects artists at a cost that would allow a studio to deploy it to a wide number of artists across the production pipeline.

Since the original product launch in 2008, the HP DreamColor Display has been used in the creation of blockbuster and award-winning films. HP DreamColor Displays helped bring color to life for a magnitude of award nominees and winners, including “Life of Pi”, “Hugo”, “Gone Girl” and all DreamWorks’ animated films from “Madagascar” and the “How to Train Your Dragon” series.

HP DreamColor Displays were used in a number of the films nominated for the 2015 Best Visual Effects categories and Best Animated Film , including: Weta Digital for visual effects on “Dawn of the Planet of the Apes” and DreamWorks Animation for Best Animated Feature Film, “How to Train Your Dragon 2”.

In 2014, HP announced two new HP DreamColor Displays, once again disrupting the color-critical display market by achieving new levels of affordability and color accuracy. The HP DreamColor Z27x and Z24x displays for PCs and Macs feature HP’s second-generation DreamColor Engine with unprecedented calibration control and accuracy so precise that animators and artists can trust that what they see on their desk matches what ends up on the big screen.

Why not have a go? You've got nothing to lose, and possibly a luscious 27" monitor with over a billion colours to gain. (Remember, this is UK only!)