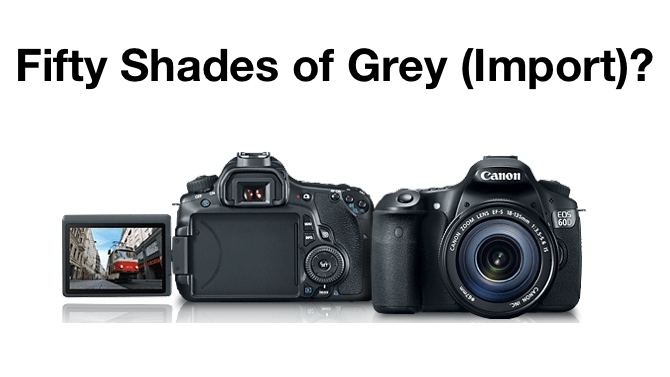 I recently encountered a thread on one of my favourite forums in which someone was asking for opinions on a Canon EOS-60D package he'd seen on ebay. This package included the 60D body and extras including three lenses including a battery, charger, flash cards, various filters and diopters, cleaning kit, tripod, and more. All of this was neatly photographed and posted for sale on Ebay by a vendor we'll call, in order to protect the guilty, Pretty Cheap Digital, based in New York

Probably half my audience is currently nodding sagely, knowing what's coming next, but if you haven't encountered this particular little machination before it's apt to blindside you, and our hero in this instance was foaming at the mouth to get his hands on a camera. I told him not to touch it with a ten-foot pole. Why?

Too good to be true?

Well, let's first get pricing out of the way – this package was up for about $1200, about $100 more than B&H asks for a 60D with a nice little kit of a few brand-named accessories. This is too cheap for a 60D body with a set of decent lenses, so we must assume they're not particularly decent lenses. But wait; the rot goes deeper. The battery and charger is promoted as an extra? All 60D packages from Canon come with a battery and charger as standard. What's more, the battery is referred to as a “starter battery”, which almost certainly means that it's a non-Canon clone of dubious reliability. I could go on, but the overall picture that we're forming is one in which the 60D body may well be the only really genuine and useful thing in the kit – and if it's a grey import, it probably doesn't have a warranty that Canon USA will have anything to do with. Suddenly, $1200 starts looking like a pretty poor deal, considering you could have had a considerably more reliable retail experience at somewhere you've heard of and got lenses that light can actually go through.

The really depressing thing is that this experience is far from the worst of it. Our hero in this case didn't buy, and is currently on his way to pick up a 60D starter kit from somewhere he can go back to and bang on the counter if it gives him any trouble. The internet is replete with examples of the real problem, though: people who have been sucked in by impossibly low prices and then told the camera was out of stock, or that only particular kits were available, or that the camera would be in Chinese, or otherwise blandished to spend more money. So much more money, in fact, that the company in question ended up taking a reasonable fee for the camera, and then a much less reasonable fee for the kit of feeble and poorly-made accessories. That's a bait-and-switch scam, pure and simple, and it is alive and well and feeding on camera enthusiasts.

This, therefore, is a public information announcement: be careful who you buy things from, especially if you're a freshly-minted film student with your last $1000 burning a hole in your pocket and eyes full of the latest DSLR. Do research. Look into it. Establish exactly what you're going to get, and exactly what it's going to cost you, and don't rely on fuzzy photographs in Ebay auctions which can obscure the true nature of that ripoff battery or Z-grade lens.

Of course, I don't mean to imply that all east-coast electronics dealers are the bad guys – after all, B&H is based in New York and they have an enviable international reputation - and anyone advertising in RedShark is a safe bet. Likewise, it's unlikely that these sorts of problems will afflict higher end cameras, which are generally sold to people with more than adequate legal clout to chase up any attempt at foul play. Given their crossover position between still photography and video, it's possible that what we're seeing here is simply the video DSLR field bringing the sharp practices of the still photography world into the realm of motion pictures. In cases of uncertainty, it's often worth running a Google search on the company name, possibly with the word “scam” after it, although it's worth bearing in mind that almost all companies will, at some point, have upset someone, and the density and consistency of complaints should be taken into account. The New York Better Business Bureau has been invoked in situations like this and there are occasionally snippets of information to be found on their site.

Either way, a camera body is a big investment for most people, and it's one well worth getting right.  Caveat emptor (Buyer Beware).