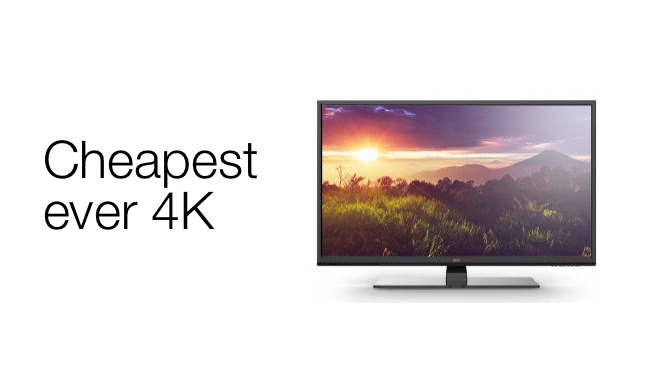 How low can they go? This is the cheapest 4K TV we've ever seen

Only two and a half years ago, the cheapest 4K TV you could buy was around $20,000 dollars. Now you can buy one for a sixtieth of that. To be honest, the former was a top-end luxury model and the latter is, shall we say, more basic. But it's still a fully functional 4K TV that might be useful as a computer monitor as well.

If you're outside the UK, you're out of luck with this particular offer, which is from Ebuyer.com. Here's the deep link in case you want to try your luck! (You will probably find that this link goes dead in a few days.)

But whether it's available to you or not, this is at least in some sense, news, because we were led to believe when 4K TVs first came out that it would be ten years before they dropped to affordable prices. We've always disagreed with this analysis, and we think prices will continue to fall, and that soon, you won't be able to buy mere HD sets at all, except in bargain basement stores and in supermarkets.

This particular model has drawbacks. It's only got HDMI 1.4, so, while it's capable of playing 4K, it won't be anything faster than 30 fps. It probably doesn't include an H.265 codec either, so you'll need an external box if you want to stream Netflix in 4K.

But what an incredible bargain. You can't expect the very best screen technology for this price, but Seiki sets really aren't bad. This might be ideal as a 4K computer monitor, and will certainly function pretty well as a TV. For heaven's sake, it's rare to find an HD set at this price, never mind 4K. We can only imagine that there is a lot of stock floating around that has to be shifted - but that itself is probably because new generations of TVs come out so quickly, so, with the warning that we haven't seen or tried this TV, nor have we heard any reports about how good it is, how bad does it have to be not to be worth £200/$300?

By the way, we've never been fans of calling any above-HD resolution TV "UHD". We're happy with any set that is either 4x full HD or "true" 4K to be called "4K". We're not being sloppy here - it's just that if the term is good enough for Sony and most other TV manufacturers, it's good enough for us. And for the consumer: why confuse them by making it look as if there's something called "UHD" which looks like it could be completely different to 4K, as opposed to being narrower by just a few pixels, and the same hight?