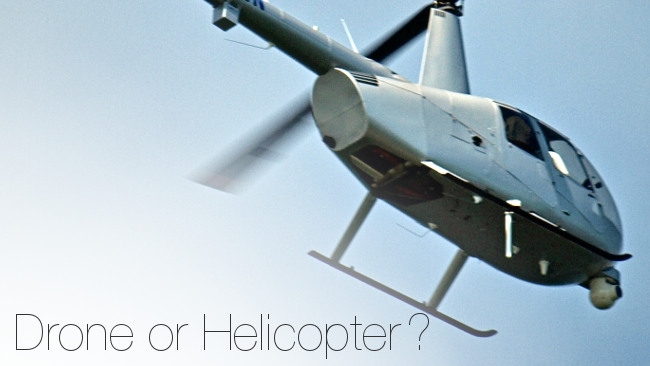 Drone or helicopter for aerial filmming?

Is the camera drone encroaching on the helicopter-based aerial film sector? According to Guest Author Willem Kootstra, there are signs it is, and serious film producers may soon regret any loss of talented aerial film operators to competition from drones.

Only a few years ago, a flying camera hit the gadget market in the shape of a multi-propellor drone.  It was an instant success and many competing manufacturers have been falling over each other since, with increasingly better and cheaper models. As a toy for kids and amateur filmers, it developed into an almost autonomous camera platform which also appeals to professional filmmakers.

Platforms such as YouTube show a massive uptake of filming with drones. Most of the footage is boring, lackluster and suggests that the drone is mainly a toy for amateurs. Lack of talent, training, experience, artistic and technical skills necessary for handling the drones' camera will never yield professional footage. The vast majority of the video samples which have landed on Internet platforms are akin to looking at a Google Maps satellite picture or an area of Google world, through the rectangular cover of a match box.

Meanwhile, the massive sales of drones have forced many governments to introduce restrictions on their use. It would be unacceptable to allow thousands of them swarming overhead, posing a potential hazard to life and limb, since hackers are always a step ahead of the game and technical failures can never be ruled out. Despite the many built-in safeguards, some drones keep falling from the sky.

In many places, the use of drones, whether for aerial filming or photography, delivering pizza's or clandestine spying, has been restricted to visibility within eye-shot, because their diminutive size lets them drop out of sight within a very short distance. From July 1st 2015, the Dutch government will limit amateur drone flying to designated sites, in line with the regulations for flying model aircraft. Restrictions still differ from country to country, but EU-wide regulations are in the works.

Contrary to the amateurs, professional drone operators must adhere to strict rules, such as passing a piloting exam and operating certified equipment. Yet the lure of the low prices, the cleverly marketed technology and onboard 4K video capture capability may seduce documentary filmproducers and directors to think of the drone as a cheap and technically unbeatable replacement for the historically pretty steep hiring rates of helicopter-borne Wescam, Cineflex and comparable camera outfits.

Traditional aerial film companies using helicopters are sounding alarm bells. The drones are encroaching on their territory, threatening their livelyhood, maybe even lowering the quality standards the sector has set in the film industry. Substantial price differences between the incumbents and the remote-controlled competitors are likely to sway cash-strapped producers.

Airfilm Productions in the Netherlands (with offices in The Hague, Dubai and Capetown) operates Europe-wide, in the Middle East and Africa, using sophisticated drones and professional cameramen. Airfilm Productions' Bastiaan Pauw admits that there is 'market cannibalism' between the two filmsectors. He also acknowledges that camera drones are no substitute for helicopters. The manufacturers don't claim they are. "They are complementary," says Pauw.

Drone operators can overcome the line of sight operating restrictions by putting pilot and cameraman in an open car to allow for piloting and following the drone over longer distances while shooting aerial film up to 120 metres altitude, within the time determined by battery capacity. But this work-around demands road networks and open country without visual obstructions between the moving pilot and his drone.

The argument for aerial helicopter filming

Professional cameraman Darren Constantineau, specializing in helicopter-borne aerial filming, confirms that the drones are encroaching on his trade. He points out that the use of helicopters fitted with the best cameras and lenses in the world for really gripping, creative, artistic, rock-steady, colourful, pin-sharp, dynamic, varied and beautiful, moving footage, is worth every cent spent on it.

The helicopter's range in both altitude and flying distance is superior to the drone's, as is its all-weather capability, its payload allowing for cinematic quality camera equipment and production staff, and its much wider viewing area for the camera operator, locations guide and director. Sitting virtually on top of the camera beats following it by car.

"If drones are to be taken seriously as when used for professional filming purposes, then local governments must impose more strict regulations regarding their use. In Portugal, for example, the only restriction is flying above private property without authorization, leaving the drone operators a carte blanche for everything else," says Constantineau.

"France, on the other hand, has imposed many more restrictions. One example is the 21 week filming permit waiting time period. I just wish the government here would impose similar restrictions on drones as they have on real helicopters, to help weed out the amateurs from the serious operators and help to maintain the level of safety in our airspace," Constantineau adds.

He operates from Portugal with his company Darren Constantineau Ltd, and offers a full range of "world-class quality gyrostabilised imagery, noteably the Wescam HD and ultra HD for rent, plus sales, repair and modifications worldwide. The systems can be mounted on helicopters, planes, boats, blimps, trucks, trains and suspended on cables," proving there is more to it than meets the eye.

"Drones must be considered complimentary and not as a substitute for real helicopter aerial filming," says Constantineau, pointing at the payload of helicopters, which allows for  up to four passengers in addition to the pilot and the camera operator. Given the flying time of a drone, approx. 7-15 minutes, and that of a helicopter, approx. 3 hours and 20 minutes, it's clear that the latter offers far more productivity.

Bastiaan Pauw bemoans the shortage of professional drone camera operators and pilots. "(Lack of) safety is the biggest threat to this sector," he says. "Out of the fifteen certified companies in my country, nine have had a crash." His own company has clocked up 1,200 hours of aerial film shoots without a crash. He expects a sanitizing effect from the steadily developing legal framework on the proliferation of drone operators. Only the best will survive.

The helicopter as a camera platform will most likely stay in business for filming events, such as the Tour de France, documenting cityscapes and countrysides, aerial surveillance and shooting footage of off-shore platforms. Time will tell whether quality or price tag decides the fates of helicopters and drones as camera platforms.