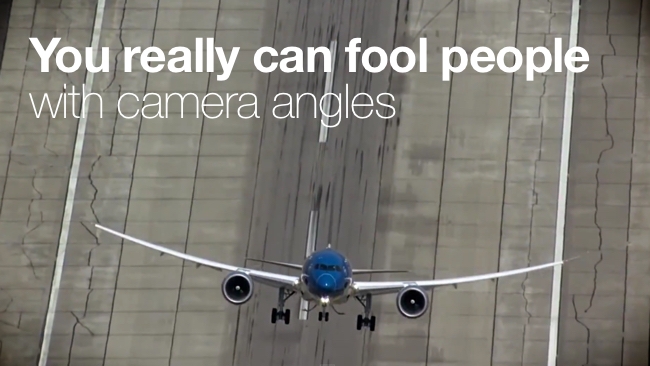 Simple camera tricks can mislead viewers with ease. Even without CGI or special effects, there's the potential to decieve with any camera, and any scene. Here's a case in point...

"The camera doesn't lie" is one of the most misleading cliches in common use. It's never been more inaccurate than now, the era of Photoshop and CGI. The reality is, well, there is no reality.

But even when you go back to basics - with no computer trickery at all, it doesn't take much to mislead vast numbers of people.

Take this video, for example. We came across it like thousands of others, via a rather sensational looking headline: "New Boeing 787 Dreamliner performs near vertical take-off".

Now, I know a little bit about aircraft; enough to know that fixed wing planes don't take off vertically. Not unless they have swivelling engines, and I'm not aware of any airliners that have those.

But the video is pretty convincing. That plane takes off at a crazy angle.

Except that it doesn't.

What actually must have happened is that the video was shot from another aircraft some way away, though a long lens. The lens was at exactly the same angle as the take-off angle of the Dreamliner. So as soon as the 787 lifted off, it was head-on to the camera. And that's why it looks vertical. The actual angle, according to pilots who have commented on this, is more likely to be around 20 degrees. Not exactly vertical.

But you can see how easily people have been misled. National newspapers have reported this take off as being "near vertical" and so that's what a huge number of people think.

This is a pretty obvious example if you know a little about lenses. But I wonder how many times we're led astray and it's not so obvious?

(The "vertical" take off is at about ten seconds into the video).