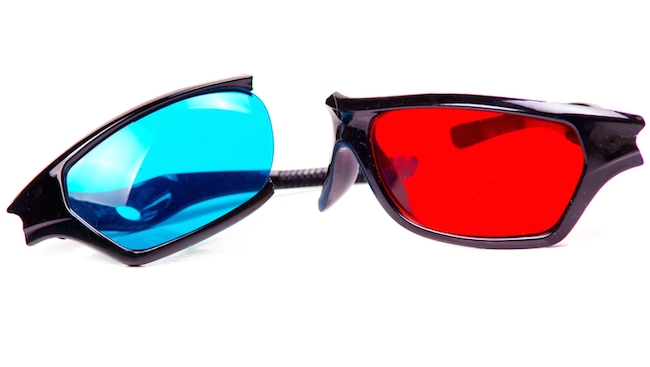 Does the recent announcement that Sky is shifting all its 3D content on to its on-demand service mark the beginning of the end of 3D? Roland Denning and Andy Stout present their thoughts.

Did we ever want 3D anyway? By Roland Denning

Despite optimistic technologists throughout the 20th century predicting ‘one day all films will be in three dimensions’, 3D is usually a response to periods of crisis in the movie industry. The first spate of 3D was in the 50s when TV was seen (rightly) as the huge threat. We still get revivals of classics form this era, made using the anaglyph system of glasses with one red and one green (or cyan) filter, like Hitchcock’s Dial M For Murder and Jack Arnold’s Creature From The Black Lagoon and They Came From Out Of Space. Anyone who’s seen them probably remembers them for when rocks tumble out of the screen into the audience or when telescopes or scissors loom over the stalls.

A couple of decades later, 3D was revived by the sexploitation industry - like the 1969 The Stewardess (at the time of its release, the most successful 3D film ever) and the 1972 British film, The Four Dimensions of Greta (promoted, sensitively, as ‘A Girl In Your Lap’). The latter was shot mostly in 2D colour but with flashback anaglyph 3D inserts of Greta (a missing Scandinavian au pair) swinging on a trampoline and throwing her bra to the audience. The 3D sequences were shot on a 1950s camera the director, Peter Walker, had found abandoned in a garage. It took another couple of decades for the technology to evolve beyond gimmick status.

By the time we get to Avatar in 2009, 3D systems had been perfected. But despite the few successes, it seems interest in 3D soon peaked - 3D has failed to get beyond its image as a sort sideshow spectacle. Why? I have my own theories.

Firstly, we don’t see the world in 3D. What? you scream, of course we do. OK, put it another way - we have 3D vision but we scarcely use it. Put a hand over one eye - does the world suddenly appear flat and unreal? No. Most of the time we are barely aware of our stereoscopic vision - it’s something that is essential for our negotiation of space but, unlike colour, it’s not an intrinsic part of how we see the world. Consequently, when 3D movies emphasise stereo vision that actually look strangely unreal.

Perhaps more importantly, 3D demands a certain sort of imagery - it works best with clean sharp images. But clean sharp images are not what most filmmakers want - most movies depend on images that leave space for the imagination to intervene, we don’t want everything too defined, hence the demand for shallow depth of field, softer lenses, diffusion, grain, smoke - all things that play havoc with 3D systems.

Backgrounds work great if they are a myriad of distant stars or fishes in the ocean (witness the success of 3D movies like Life of Pi and Gravity), not so great if they are lost in the mists. Best of all are the clean-cut outline of animation. If you want to get away from digital precision and seek diffuse, dream-like grainy images, forget about 3D.

3D works best of all with computer generated graphics and games - and, of course, movies derived from games. Now the technology is established I’m sure it will continue to have a place in that realm. But for the rest of the market it seems that 4K is taking off in way that 3D never did - at least there is always something to watch in 4K, even if it is only upscaled HD.

The announcement that Sky was to close its 3D broadcast channel and move all stereo 3D content to on demand crept out rather furtively in a blog post from its Brand Director, TV Products earlier this week. As the saying goes, nothing quite became it like the manner of its passing.

Of course, it's not the final final death of the format, just the latest in the long list of events that suggests reanimating its moribund corpse would be a rather fruitless gesture. From the lack of content from the 2012 Olympics, to ESPN's decision to close its own 3D offering in 2013 (and the BBC's statement from the same time saying that it had conducted all its experiments now, thank you very much, and had decided there were better ways of investing license payers money in the future) to its complete absence at the 2014 World Cup, it has been staggering around for a long time and Sky's insistence on persevering with it almost bordered on the perverse.

That said, the lack of EPL games captured this season was a bit of a clue as to which way the wind was blowing. Indeed, you would have to say that the format is probably four years past its peak, which came and went so quickly that we never even realised it.

That was probably 2011, a year after Sony bankrolled the capture of 25 matches from the World Cup in South Africa, and a year before James Cameron made his famous IBC speech dividing the future of the industry into a terminal battle between 3D and 4K. “We have a bandwidth bottleneck and if we start going to higher spatial resolution it will be at the sacrifice of 3D rollout,” he said. “So I see it as a little bit of an arms race right now.”

There's a lot of schadenfreude tone gained from reading quotes from that period, though you can tell that the wolves were starting to circle even then if you read between the lines.

Francis Tellier, CEO of HBS, produces the host broadcast feed of the World Cup for FIFA and speaking at the same 2012 IBC on the subject of 4k said: “It is a brilliant format but there is a danger for the industry in communicating to the public that U-HD is available now...3D is available now and you cannot expect U-HD to go mainstream for 20 years."

2032? If that seemed pessimistic then it sounds faintly ridiculous now.

Interestingly, here's a paragraph I wrote for TV Technology Europe back in 2009. "[In a DTG report] only 14 percent of the members it surveyed said that the business case for 3DTV had been successfully made, largely due to the difficulty of forecasting consumer acceptance of an emerging technology and its potential take-up. And, even more interesting perhaps, a recent IABM/Devoncroft Partners survey had 3DTV languishing in eleventh place in a survey of technology trends that will have an impact on the industry over the next two to three years.”

Essentially in the following years the industry was guilty of technological determinism and the hubris of assuming that just because you can build it, then they will come. They won't. 3D in the home was always going to be a very different proposition to the (then) successful cinematic 3D, but there was a wilful disregard for this at all levels of the industry. From the manufacturers that were hoping to kick-start the next upgrade cycle several years early, to the broadcasters looking ahead to OTT and hoping to differentiate their offering, to the trade shows that saw a way of putting more bums on seats, and the magazines that looked to flog more adverts to the manufacturers that were hoping to kick start...you get the picture.

Stereo 3D basically coupled the ethics of snake oil sales with the engine of a Ponzi scheme and for a couple of years at least was the only game in town. Even at its peak though there was a clue about the real direction the industry was heading, with IBC2011 labelling tablets as "totally disruptive", which seems fairly prescient all things considered.

The question is, has the industry learned from the experience? Sky itself probably has no case to answer — it did 3D better than anyone and as a leading pay-TV provider has a certain role to play in pioneering new technologies — but for the rest of us some of the hype surrounding VR at the start of the year brought with it an unpleasant sense of déjà vu.

And then, of course, at some point the problems surrounding glasses-free auto-stereoscopic displays will finally get cracked and the whole topic can lurch out of its grave and around the tradeshow hype cycle once more. Stereo 3D fourth time lucky? There may be life in the old zombie yet…