One of the birthplaces of cinema reopens 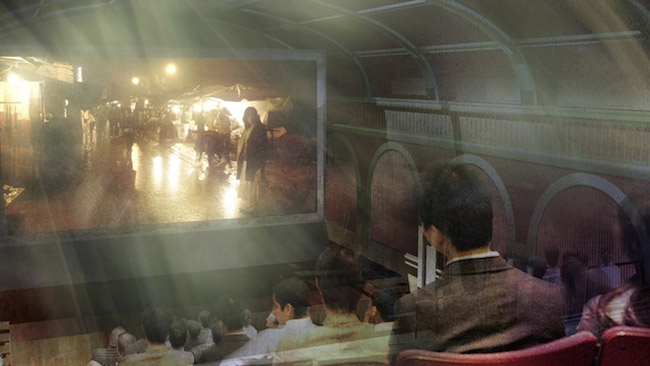 The Regent Street Cinema, one of the most famous locations in the early history of film and a key part of the genre's story in London, has just been reopened as a modern, state-of-the-art boutique cinema.

Most people have seen the very early motion picture film of a steam train moving towards camera, and read about the terrified reaction of audiences who were, we're told, apparently in genuine fear of being run over by a train. The hyperbole used to describe modern audience reactions to stereoscopic filmmaking might make us a little suspicious as to exactly how terrified viewers really were, but nonetheless, this was clearly a key moment in the development (ha!) of motion picture photography as a commercial artform. And yes, that remains true even though the first performances were actually a lockoff of three guys playing cards, as opposed to the more action-packed public transport subjects which made the famous headlines.

The event has become an urban legend of avowedly Victorian proportions, but one of the forerunning candidates for where it might have happened was the Regent Street Cinema, in London's West End, in 1896. The show was the Lumière brothers’ L'arrivée d'un train en gare de La Ciotat (yes, those Lumière brothers) and people paid good money to see the 50 second short; a concept which has, sadly, been lost to progress, at least in the experience of the average modern short filmmaker. The building itself was put up in 1848 as part of the Royal Polytechnic Institution, which had been founded in 1838 and was the first organisation in the UK to bear the term “polytechnic”, probably before it the word had become notorious as a description of an educational establishment that really wanted to be a university but sort of wasn't. The popularity of science in the Victorian era meant that exhibitions of new technology were popular and deliberately spectacular lectures were sometimes publicised as public entertainment, so the venue was well chosen. Would that education were so popular now.

Westminster was upgraded to be a university proper in 1992, but by that time the Cinema had ceased to be used as such, and had fallen into use as a lecture theatre. Happily, though, though the recent application of a large quantity of money – about £6m – the Regent Street Cinema has been brought back into use, with equipment to project 16mm, 35mm and 4K digital media. Despite the up-to-the-moment facilities, though, the opening show was the 1939 feature Only Angels Have Wings, directed by Howard Hawks and with cinematography by Joseph Walker who went on to shoot It's a Wonderful Life in 1946. There is, we're told, no intention to exhibit a solely historical programme, though; with Princess Mononoke and a double bill of Alien and Blade Runner, there should be something coming up to keep anyone happy.

For camerapeople, though, it's worth bearing in mind that some of those old black-and-white movies have a lot to teach us about composition and lighting, without the crutch of colour as a way to separate subjects and backgrounds; one thing that could be on the list but isn't is Citizen Kane. Still, it's nice to see that someone will be projecting important recent film as well as greats of the more distant past, even in a field with such a comparatively short history.

The Regent Street Cinema opened – or should that be reopened - this week. More information about the film programme and associated events can be found at http://www.regentstreetcinema.com/