Shooting your next film in Colombia? 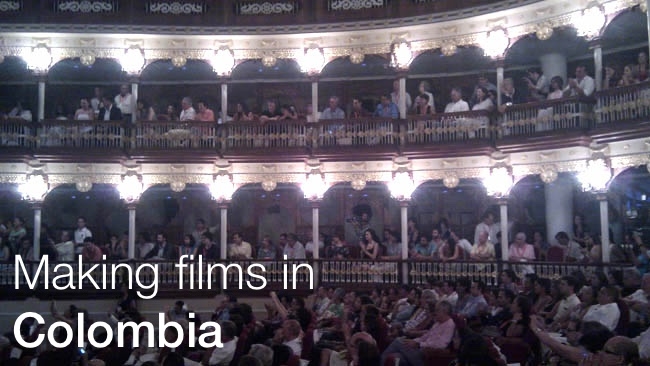 Colombia as a destination for film productions?

So, how does an emerging country move onto the international stage and try and compete for production dollars? Fresh from a working tour of Colombia, Phil Rhodes reveals a modern country trying to cast itself as an increasingly viable option for runaway film productions.

A Cartagena evening, with the palms nodding gently in the cool breeze from the Caribbean, the scent of coconuts and the cries of the itinerant coconut-seller (OK, I'll stop now) is an unusual industry-related experience for someone used to studios made out of rust, rainwater and hope, as they are in the UK. To be fair, preparing for an expeditionary tour of the city – a process potentially involving handfuls of Factor 100 and involuntary exclamations of "woah" when leaving an air-conditioned building – is a reminder that this is very certainly the tropics, but it's all worthwhile. Cartagena is a perfect colonial Spanish walled city, built that way to ward off actual pirates of the actual Caribbean. Proimágenes Colombia, the sponsors of this little expedition, have cleverly made Cartagena the last stop on our week-long tour of the country. It would, in any case, be the most memorable. 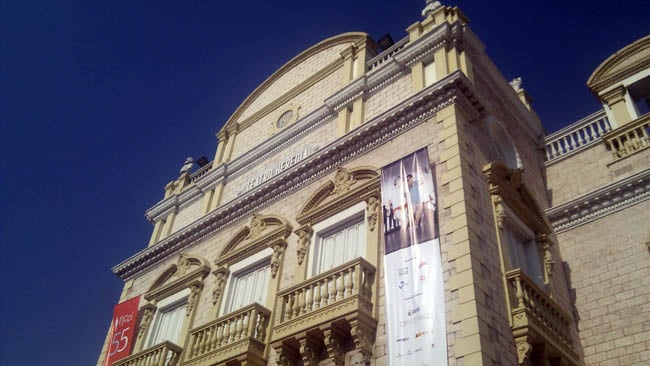 Teatro Heredia Catagena before the Premiere of 'Alias María'

That Colombia has been enormously cleaned up in the last twenty years is more or less common knowledge, but the organisation's purpose in bringing us here is straightforward. Since 2013, the Colombian authorities have offered very competitive incentives to companies willing to spend at least half a million US dollars (roughly, as it's denominated in Colombian pesos) on filmmaking in the country. Organised as a cash refund on the total spend, as opposed to the common approach of setting things up as a tax rebate, the deal can be as generous as 40% on film services (including equipment, people, and so on) and 20% on logistics, such as hotels and transportation. Further details are given in a video presentation:

Naturally, there's procedure and paperwork. The production must also pass inspection by a board designed to ensure that the film being made is of mutual benefit to both the filmmakers and the nation. It would, perhaps, be intuitive to assume that the Colombians are more anxious to take advantage of their natural and historic resources than to exploit the edgier parts of the country's recent history. Even so, with an eye on the practicalities, it's already been made clear that stories of guerilla warfare and narcotics trafficking, both things that the country is understandably keen to put firmly in the past, won't necessarily be subject to immediate disqualification. In fact, productions featuring these topics have already been made.

Of course, that's one of the key things about modern Colombia. It's not difficult to get a reaction (in jest, perhaps, but a reaction nonetheless) from people at home, expressing concern about a place that only made headlines in Europe or North America for less-than-ideal reasons. While there are still limited amounts of guerilla activity in the south of the country, the government is keen to emphasise – and it seems to legitimately be the case – that this is largely a problem of the past. Certainly, the clean-up of cities such as Medellín, which was internationally notorious in the 1980s and parts of the 90s, is impressive in achievement and ambition. Bogotá has, by most definitions, a modern city centre (though public transport could be better) and Cartagena is already hugely popular as a tourist destination. Granted, this is based on the experience of an organised tour which kept (perhaps regrettably) to the cities, but barring overwhelming changes in the socio-political outlook, there seems to be good reasons why filmmaking should be pursued here. 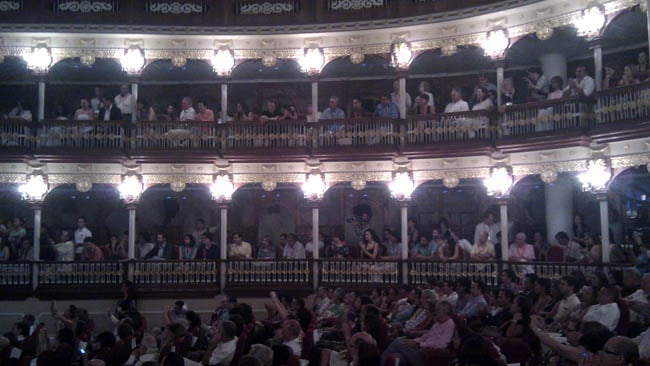 Teatro Heredia Catagena interior at the Premiere of 'Alias María'

To some extent, it already is. The 55th Cartagena Film Festival opened recently with the premiere of director José Luis Rugeles's Alias María, a film which refers unequivocally to the security situation, focusing its narrative almost exclusively on the experiences of the left-wing guerillas and their lives in the jungles of the Amazon basin. The titular Maria, a green-clad, gun-toting fighter herself, is tasked with taking the secret offspring of a commander to safety through the jungles of southern Colombia, in a plot that's fairly linear, but makes good use of natural locations. The use of what are perhaps rather euphemistically referred to as "natural actors" is something we came across more than once, with mixed success. Locals admit that the events depicted in Alias: Maria, which are somewhat timeless, given the anonymous military clothing of the principal cast, could have taken place in the last five or ten years. The film is no international blockbuster, but is accomplished in terms of its cinematography and the enormous production design opportunities afforded by real, actual Amazonian jungle. Alias María is an interesting production technically: Sony F55, shot spherically for a Cinemascope release, if I'm any judge, with extensive use of Steadicam in what must have been astonishingly trying circumstances.

It's also a good example of what Colombia is currently good at. Filmmaking facilities do exist here. Fox Telecolombia and the enormous media conglomerate Caracol are so successful that the rebate system is designed specifically to prevent their monopolising it, and there's no question about the quality of their material. 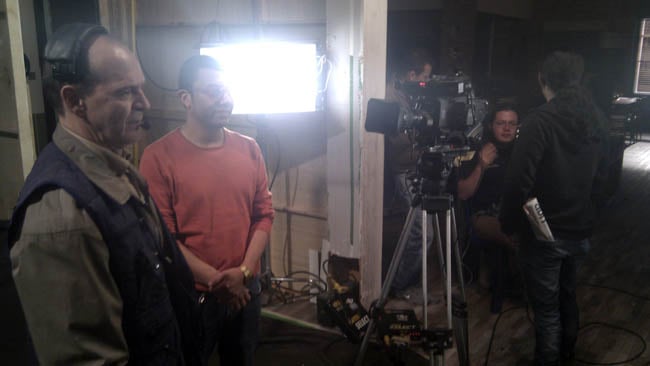 On-set at Caracol in Bogata

That aside, the availability of crew, equipment and facilities is not what it is in Los Angeles or London. There are, for instance, reputedly only two really good Steadicam operators in the country, and that's a chicken-and-egg situation that's tough to fix without a guarantee of a lot of work. There is no crew union here and thus no rate card, a situation that complicates budgeting and is ripe for exploitation by unscrupulous producers. Still, local company FIXME is among a couple who can provide gear and, for larger productions, have deals with equipment providers in Mexico, and there are apparently already a couple of Russian firms in Bogotá.

For now, the funding for the film production refund is about $12million annually. Between that and the (roughly) $500,000 minimum spend, there's a fairly narrow bracket of productions that might get involved. Right now, it might be difficult for a very large production, a Fast and Furious, for instance, to shoot in Colombia without bringing in so much equipment and so many crew that the refund might not make much difference overall. It's in the middle ground of independent production (that's independent in the US-sense of a few million dollars budget) that it perhaps makes most sense. And of course, as opposed to Los Angeles, where it costs thousands in insurance and permits to put a tripod down on a street corner, things are, at least for the moment, a lot easier in Colombia, notwithstanding the fact that all productions should be insured at some level. There are certainly parts – perhaps small parts, but parts nonetheless – of Bogotá that could double for many first world cities and probably at much lower cost than, say, Canary Wharf. The popularity of Cartagena as a tourist spot means that it's possibly not as easy to shoot as other places in the country, but it is sufficiently unique to have been made a UNESCO world heritage site and there are small areas with similar appearance along the Caribbean coast, as well as inland. 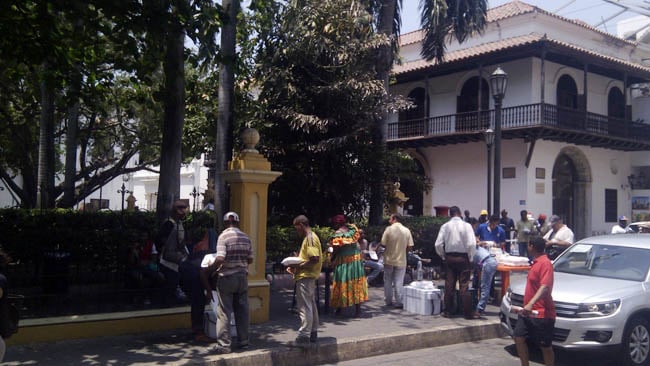 Our hosts seem happy to describe the country as "emerging", which is probably fair. Whether it will be able to build the infrastructure to emerge fully at all levels international filmmaking remains to be seen. Still, there's already some capability here, as well as a whole lot of ambition to turn Colombia into the Poland or Toronto of South America, at least in terms of what the big US unions refer to, with a dark scowl, as "runaway production."