This is Avid today: Audio is king and Media Composer is free [updated] 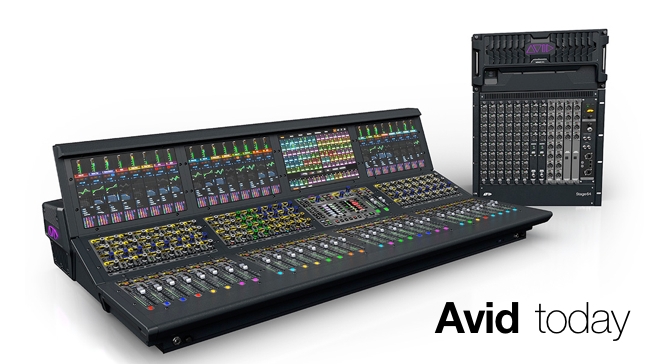 [And Orad is bought.] The Avid press conference on Saturday morning was a fascinating confirmation that we live in a time of extreme technological change and that Avid is now an IT company - and it makes more audio than video hardware. It also announced first thing on Monday morning that it's spending around $60m buying realtime graphics company Orad.

What does that mean? It means that it now that that the Boston company has in place all of its core elements (which have evolved over more than two decades), it's trying to integrate them though the cloud, and though compatibility between applications and the ways that they talk to each other.

Essentially, with the exception of its hardware, Avid's products are becoming services, available from the internet.

It's also a sign of the times that Avid's audio products were given more time under the spotlight than Media Composer.

As an acquisitive company, Avid has had great successes and lesser ones. But what it's managed to do with its audio division is verging on the remarkable. Pro Tools was its staple audio product, but when they bought Euphonix, - a clever audio mixing company with stylish and ergonomic control surfaces - it found itself with the means to branch into the professional side of studio and live mixing. The audio ecosystem that it has built is impressive, as is its newly-announced Venue|S6L system, a modular and scalable networked live mixing system.

Avid Everywhere brings the IT concept of a Service Oriented Architecture (SOA) to media, where though various compatibility layers, Avid's own and its competitors products can work together sharing features and services though a mutually understandable software stack.

With so much happening at very high levels in the IT domain, Media Composer was barely mentioned. But we did hear the news from Avid Chairman, President and CEO Louis Hernandez, Jr. that a version of Media Composer will be available completely free, mirroring the recent announcement about Pro Tools First.

My feeling (and that of RedShark Technical Editor, Phil Rhodes, who was with me) was that the messages in this meeting were primarily for investors in Avid. When you're a public company, especially one in the Tech sector, you have to pander to the stock market. You have to have a "vision" and you have to "lead the way".

Video editors might have left this meeting disappointed that there was so little meat in it for them. But for anyone with a vested interest in the success of Avid, the company, they told a good story.

As for the Orad purchase, the run up to NAB is usually a fertile ground for announcements of a mergers and acquisitions variety, and it had been a quiet year so far until this. Orad specialises in realtime 3D sports graphics and virtual studios, and buying the Israeli company is a big move for Avid, which it in turn rationalises as being in the main "adding key content creation and media management solutions to the Avid MediaCentral Platform."

It also helps it diversify even further into live TV production from what was once its core editing market, but given that it's just taken out a $100m loan to underwrite the purchase, you can perhaps see why it was so keen to address  investor concerns slightly ahead of the announcement.