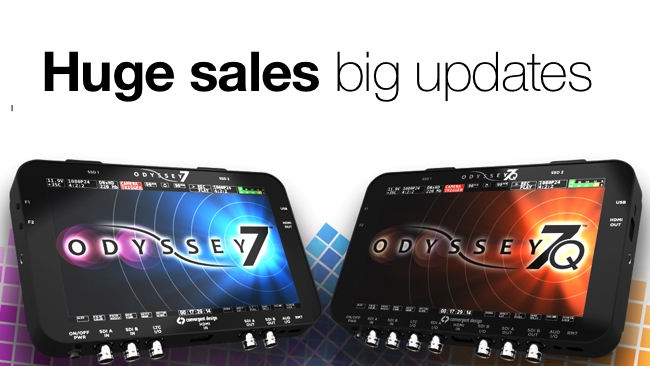 We've often said that when a manufacturer launches a new product these days it's actually more than that: it's a platform. It doesn't matter whether it's a camera or some other type of equipment like an HDMI or SDI recorder: the chances are it will have spare capacity that can be used for significant upgrades.

This is very largely due to the use of a type of chip called an FPGA - a Field Programmable Gate Array.

These seemingly miraculous devices behave like hardware - which means they're very fast - but can be completely reprogrammed, even to the extent that they can be rebooted with new code and act like a completely different type of device.

FPGAs are getting bigger and faster. They have billions of transistors. They're expensive, but the alternative, which is to use ASICs (very cheap but not programmable and extremely expensive to design) is not an option for smaller, more specialised companies - and the fact that you can't update them with new software means that the only way to bring new functions to customers is to sell them new products. This isn't viable for smaller companies and nor is it particularly ecologically sound. So, while FPGAs are a more expensive option, they are actually cheaper, probably, in the long run.

The Odyssey range from Convergent Design was, in our view, ahead of its time, with 4K capability built in and an OLED screen. Although not what you could call "cheap", it did seem a good price for the features it offered, and it seems that customers agree with this because Convergent Design has, in the space of a year, doubled in size and quadrupled its revenues. The sense that they're on to something with the Odyssey is pretty tangible.

Their Odyssey platform is so upgradable that they haven't felt the need for a new star-studded product launch at this year's NAB, and they've come out and said so in a blog released today.

Much more important, they say, is the constant stream of firmware upgrades that just keep making the existing product better and better.

We like this approach. It gives extra value to existing customers and it keeps the product current for new ones.

It's likely that more and more companies are going to adopt this manufacturing philosophy, if they haven't already.

Finally, just one example of the sort of upgrade promised for the Odyssey: In April, we should see programmable custom 3D-LUTs with LUT routing to tools & outputs.