What to expect from NAB 2015 and why, this year, it's so difficult to predict 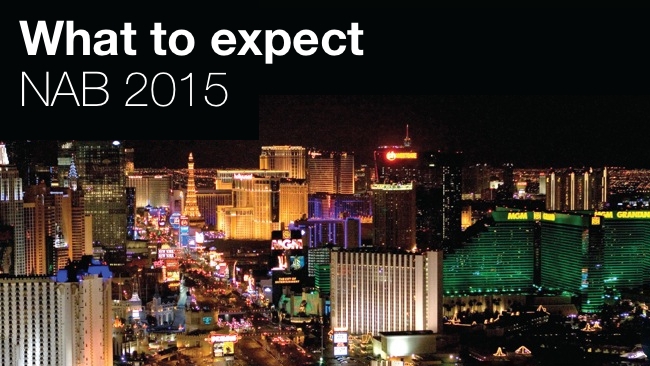 What to expect at NAB

What's coming up at NAB 2015, the biggest show of the year? It's harder to predict than ever this year. Here's why

It's coming up to the biggest show of the year, NAB, in just a few weeks. So we thought we'd try to guess what we might see there. There are always surprises at this type of show, but, because they're surprises, it's really hard to predict what's coming up.

And it's even harder this year than ever before, because the pace of progress is so fast. All those people sagely predicting just two years ago that 4K wouldn't take off for at least a decade are definitely avoiding eye contact whenever the subject comes up.

It's quite possible that what we're seeing (with this inability to predict what's coming up) is a symptom of exponential progress, where the curve on the graph is now so steep that from our point of view it's almost vertical. What does this mean? Well, a decade or so ago, you could see that things were developing quickly, but it was also kind-of possible to predict what was going to happen next. And a couple of decades before that, you could probably guess what was going to happen ten or fifteen years in advance. But now - yes, I really think this is true - you can't even predict six months ahead with any degree of confidence. And you certainly can't imagine what's going to happen in a year's time. So with big trade shows taking place each year, it means that, essentially, we have very little idea what's going to happen.

Now, I don't think we should take all this too literally, because, you know, the sky is still up, and most buildings are still standing. But more and more we're seeing events that we just couldn't have predicted (as outsiders, at least). Who would have foreseen a social network buying a virtual reality company? (And who, fifteen years ago would even have known what that last sentence meant?)

The whole process of bringing a product to market has changed completely, and with these changes have come a different set of rules.

Imagine that you want to build a camera. You need a sensor (you can pretty much buy these off the shelf (with many, many footnotes as to why this isn't really so easy - but, just for the sake of argument...)), you don't need to design hardware because you can use an Arduino or an Android development board (or even a Raspberry Pi2). You can use pre-existing embedded operating systems. There are about a million touchscreen options. Solid-state storage is plentiful. Fast interfaces mean that you can use widely-available peripherals. And you can probably get a factory in the Far East to build a prototype in no time. As soon as the design is finalised, it can go into mass production. And it goes on.

Using common building blocks, you can make hardware do more just by writing software (I say "just" but you have to have the right skills).

And this is the first of my predictions. We are going to see some significant upgrades to existing products though software. Cameras like the ARRI Amira and the Blackmagic URSA have flexible architectures that allow for upgrades that can add functionality through a firmware update. As the processing building blocks that allow this (they're called FPGAs) get bigger and better, so will the degree of extra functionality that they will allow. I think we'll see more and more products coming with this ability too.

We may also see more devices coming with "hidden" capabilities that are revealed throughout their lives as specialist chips come into production, and become so cheap that it's worth the manufacturer building them into all of their relevant products, whether or not they're used. We've seen this recently with Sony cameras across the board being given the ability to record to XAVC. Sony has a chip that handles all their codecs and so every camera with it onboard will have the same capabilities. It's then up to Sony when they "turn on" these codecs for individual cameras, depending on the device's market positioning.

There's no shortage of choice for cinematic cameras. These range from the now "traditional" DSLR to a new generation of dedicated cinematic video cameras. The AJA CION was announced at last year's NAB (possibly the biggest surprise of the show) and has fairly recently started shipping. It takes PL mount lenses, which are typically a lot more expensive than DSLR-type lenses. I think we will see a big trend where lens manufacturers bring their prices down to the point where they don't seem disproportionately expensive compared to the cameras they're going to be used with.

Of course lenses are not cheap to make. Optical technology does not follow Moore's law, where prices halve and performance doubles virtually ever eighteen months. But if you make enough of them, then economies of scale kick in, and it's quite possible that we will start seeing new ranges of cinematic lenses for the popular cameras that, if not exactly cheap, will no longer be completely unaffordable.

Raw video has been in demand because of its flexibility in post and because it carries the entire dynamic range of the camera. I think we'll see this trend continue but also another, somewhat opposite one as well.

To work with raw video, you need to be able to see what you're capturing in the camera. The problem is that raw video doesn't look like the final, graded output. So I think we'll start to see cameras that can apply a LUT (essentially a preset or uploaded 'look) in the viewfinder or in a monitor attached to the camera. Once a suitable look has been selected, it will be possible to take metadata specifying this down through the workflow to either preserve the look or to use as a reference point for further, more subtle grading. I think we will see more external peripherals like EVFs and monitors having the ability to import LUTs to apply to footage as it is viewed on the set.

At somewhat the opposite scale from raw video, we will see more cameras and devices offering high quality edit-friendly codecs. For every filmmaker who wants to shoot raw and work with it in post production there is probably a multiple of this number of shooters who just want their footage to be usable the moment it is captured. That means having a workable image straight out of the camera in a format that can be edited immediately. So we will probably see more cameras offering ProRes and DNxHD recording in-camera. Some companies, like Sony, may offer this in addition to their own XAVC family of codecs, but this Japanese company seems to be (justifiably) increasingly confident in its own codec technology as it becomes more widely adopted in NLE and post production software.

Speaking of software, I think we will see that the move towards subscription is unstoppable. I like this idea (as long as it's fairly implemented and doesn't leave the user stranded if they lose their internet connection) but I know a lot of people don't. Nevertheless I think professional users will start to appreciate the advantages, and software developers will benefit from a more predictable income, which will lead to better planned, more powerful software. In a sense, it's a virtuous circle.

DSLRs have been at the heart of the cinematic video revolution, and it's not completely clear what's going to happen next, although there are some distinct trends.

It looks like Canon may be reversing out of DSLR video. Their latest releases, the EOS 5D S and 5D S R have 50 megapixel sensors and reduced video capability compared to the 5D Mk III. Now there are several possibilities here. The most likely one to me is that Canon will announce an EOS C300 Mk II, and that that will be able to shoot at 4K. If they do this it will be interesting to see whether it has raw capability, and what compressed format(s) it can shoot with. They may announce a new C500. Maybe that will have a greater than 4K sensor, moving it further into RED territory. (And speaking of RED, they've been very quiet for quite some time). There's also what in my view is a rather slight possibility that Canon might announce a new, specialised video version of the 5D, possibly to replace the 1DC. But this seems less likely to me because I think Canon wants to remove any ambiguity in their own video product range around their cinema cameras.

Lastly, there will be surprises. And because they're surprises, we don't know what they will be. We have great relationships with the manufacturers, but what they don't do is tell us their secrets in advance, unless, that is, we sign a legal document saying that we won't reveal anything before the show. This will probably happen in a some cases, and we never break embargoes. But if we are told any secrets, you can guarantee you'll get full and accurate coverage the minute the product is announced.