Sony's Ice Bubbles in 4K: A beautiful ad, but does it make you want to buy a Sony UHDTV? 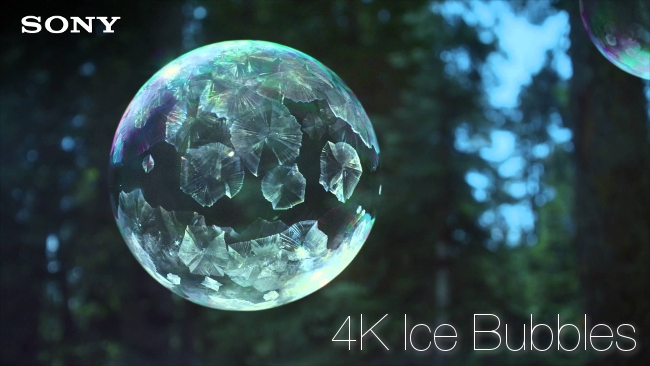 Sony just released a pretty advertisement for its line of UHD televisions, captured in 4K. But how well does it translate to sub-UHD displays? And is it enough to reel in the customers?

Leave it to Sony to go the extra mile in making a stunningly-gorgeous video advertisement for its line of BRAVIA UHD televisions. Entitled Ice Bubbles in 4K, the video puts the company's image capturing and display technology in the best possible light, as the breathtaking vistas provide the perfect backdrop for the amazing formation and slow-motion dispersal of ice bubbles.

But there's a problem. If you visit the video's YouTube page, you'll find a litany of comments that basically convey that posters can't tell the difference between UHD and HD.

For those old enough to remember the move from standard definition to high definition, product makers and advertisers faced a similar problem. How exactly do you properly convey the benefits of a higher resolution standard, when the advertisements are viewed on a lower resolution display? I distinictly remember the splitscreen comparisons of SD and HD, which I viewed from my SD tube-style television. Even with the much larger apparent difference in quality between SD and HD over that of HD and UHD, it always seemed like a bogus comparison. The only time the splitscreen 'this-versus-that' worked was during the handful of occassions I remember seeing such ads in movie theaters, where the huge screen and extra resolution made the difference crystal clear.

At least Sony didn't opt for the splitscreen in this ad, instead choosing to go the 'eye-candy' route. And the images, presumably captured from a Sony F55 (with various lenses, including a recently-developed JVC lens designed for microscopy), are astounding. But are these images good enough to make you want a Sony BRAVIA UHD television, or any UHD TV?

The problem of how to convey the benefits of UHD over HD will continue until it's no longer possible to purchase a high definition set, and even further still, as all the HD sets in homes today continue to be used well past HD's consumer expiration date. So expect more eye candy, and more ads for UHD, coming to a movie theater near you.

Check out the 'Ice Bubble in 4K' ad below. And don't miss the behind-the-scenes' technology and concept/location featurettes on Page Two!

Behind the scenes: Technology

Behind the scenes: Concept / Location