Blackmagic: How to handle difficult PR 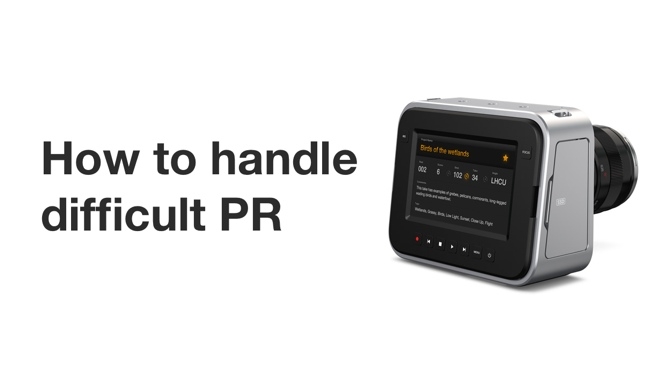 If you're one of the people who's preordered a Blackmagic Cinema Camera, unless you're very lucky, you will probably have noticed that you don't actually have one yet. RedShark, in common with the rest of the world’s media, is eagerly awaiting the arrival of a camera to put through its paces.

According to releases by Blackmagic's CEO, Grant Petty, the problem, loosely described, is due to contamination of the cover glass on the sensors. The company which makes the sensors is apparently unused to providing a cover glass because they don't usually make sensors which are intended for use in cameras with interchangeable lenses. If you're not going to take the lens off and expose the sensor to the air, the cover glass is less necessary, but in a filmmaking device it's essential. Cleaning the glass is a moderately delicate operation involving a few tools, whereas cleaning the face of a sensor, which is extremely fragile, is a major operation.

The glitch, it seems, is that the cover glass is manufactured by a third company, and they've been supplying them packaged in a way that created problems and caused the resulting cameras to fail Blackmagic's internal testing. There's a complicated story about how this was picked up and how they're intending to solve it, but that, in the broad strokes, is the technical situation.

It is to an extent inevitable that anything said by the company at this stage will be seen as something of an excuse, but I can't help but feel more charitably disposed towards Blackmagic than that. They have, at least, been forthcoming with information, but not to the extent of trying to make up things to say just for the sake of releasing an update. Petty has even admitted to the frustration he must obviously be feeling at the sight of a warehouse full of camera components and empty shipping crates. Neither of these are things you'd get from many other companies, particularly the big players (and Blackmagic is, within its field, a moderately big player) who tend to hide behind carefully-worded press releases which often contain neither information nor, importantly, feeling. Knowing there are frustrated humans behind the problem, who are willing to publicly acknowledge their frustration, makes it a lot more supportable, and even given that I find Blackmagic's and Petty's straightforward approach a lot more relatable than the rather outspoken and excessively energetic communications some low-cost camera manufacturers have recently favoured.

The perils of production

Of course, it's hard to deny that the situation is really difficult, and one would have hoped for better quality control from BMD's suppliers. One wonders who's making these sensors, and the cover glass, and how they've managed to create a situation where they're damaging critical optical components in transit then missing it in their own QC arrangements. From BMD's point of view, though, it's a tricky situation; presumably they took more than a few samples of these sensors, and presumably they were fine. It wouldn't be the first time that the preproduction tests worked perfectly only to have problems when ramping up to full scale production.

Personally, I'm anxious to test one of these things to see if they really, honestly can achieve that 14-stop headline range, so here's hoping.