Wipster: Make comments on review videos like a Google Doc 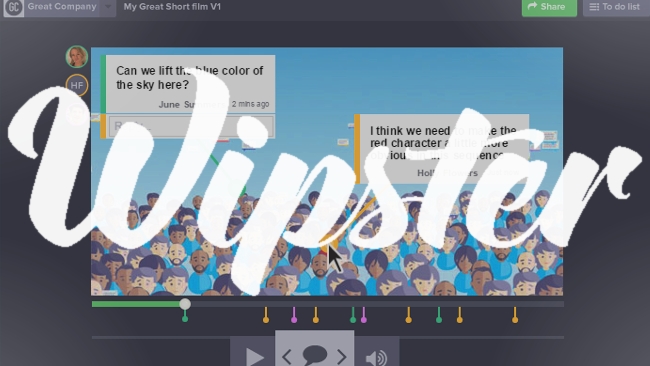 The review and approval process for videos can be a pain, and that pain increases with the number of voices chiming in. Wipster is here to alleviate that discomfort with an intuitive commenting and versioning system that turns review videos into collaborative work spaces.

If you've ever made a video for a client, or if you've been part of a company that makes such videos, then you're probably well-aware of the difficulties involved with the review and approval process. Typically, the workflow involves the spreading of links through a long email chain, followed by a rangy response of comments, suggestions, and the like from managers and stakeholders, which usually takes way too long to receive, parse, and finally implement.

It's not difficult to imagine (or recall...) the inevitable nightmare scenarios that pop up, such as early comments from eager managers that your team will move quickly to incorporate, only to have those suggestions usurped by the next wave of comments from the slower-moving, but higher-ranking stakeholders. While any billable hour is a good hour, you really don't want your company associated with projects that go over budget, as these poision pills, while initially profitable, can kill your relationship and the chances of securing more work from that client in the future.

Wipster to the rescue

A new player on the scene, Wipster has built an easy-to-use, cloud-based system that streamlines the convoluted process described above. Instead of living in the inbox, or worse, junk mail folder of an email application, the Wipster workspace is the review video itself, with simple tools, very much like the commenting system of word processors, that make adding and reading notes a breeze. If I were to play the 'it's like this mixed with that' game to explain what Wipster does, I would say it's like the commenting system of Google Docs mixed with that of Soundcloud, but for video, using the entire screen's real estate as the canvas for comments.

Wipster, at its base level, is free to try and use. For bigger projects that involve more accounts, there are monthly subscription fees, but they are very reasonable for what you get, which is peace of mind and effective safe-guarding from the business-killing kerfuffles that plague the usual review and approval process.

Check out the Wipster launch video bleow. Visit Wipster.io for more details. And also check out full press release of the company's launch from March 2014, on Page Two!

SAN FRANCISCO, March 14, 2014 /PRNewswire-iReach/ -- Wipster announced today the launch of its new video review and communication platform that let's project teams put feedback directly on videos during production. With pricing starting at $9/month, Wipster is a game-changing app that brings new video creators into the market by making video collaboration easy and inexpensive. The new product allows all video creators - freelancers, marketers, agencies and production houses, to create powerful videos on a platform which eliminates the major complications of video production: review, approval, task management, and communication. Wipster has already been adopted by thousands of filmmakers, and has just launched a new product aimed at helping freelancers and consumers collaborate on video together.

"Lot's of companies are scared of making videos - we are making it safe," says Wipster CEO Rollo Wenlock. "Video is soon going to be over 90% of the internet, and we're here to make sure that small and medium sized companies are not left behind. Wipster helps align creatives and business buyers so that video is functional. Video is now functional."

Wipster closed an initial Angel Investment Round in late 2013, raising over $600K from investors including the ICEAngels, AngelsHQ, technology evangelist and Forbe contributor Ben Kepes, and Xero Chairman Sam Knowles. Funds will be used to expand the product and spur growth internationally. Wipster currently has over three thousand users, boasts over 30% month on month growth, and serves clients like accounting software giant Xero.

Rod Drury, CEO of Xero says: "Wipster has empowered Xero's global marketing team to effectively collaborate in video production. Their platform is unique; it provides a clean, creative space perfect for teams working remotely or telecommuting, and gives the right amount of structure to our video creation projects. In a world of increasingly busy messaging, video is critical to help us transform complex products into an easily understandable message. The power of video is growing -- and Wipster helps marketers harness that power".

Wipster is a New Zealand founded startup with offices in San Francisco, that provides a beautiful and intuitive platform for reviewing, approving, and collaborating on video production. A Microsoft BizSpark One partner, Wipster focuses on user experience to make video creation a joy. Customers experience an over 70% increase in editing and review efficiency using the platform, which includes features such as contextual commenting (writing frame-accurate feedback directly on the video), encrypted sign-off (only the assigned person can approve), and automatic delivery of hi-res files when the work is approved. Learn more at www.wipster.io.